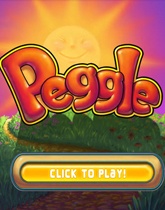 Review by Lewis B
Peggle

As one of the most addictive puzzle games I have ever played, Peggle deserves and justifies the praise it has received since its launch. A quirky, vibrant game with great visuals, sound and Unicorns, it’s as addictive as a class ‘A’ drug…

Originally released on PC in February 2007, Peggle is the inception of Sukhbir Sidhu and Brian Rothstein of PopCap Games.  Inspired by Pachinko and its famed parlors in Tokyo, the premise of Peggle is very simple.

A static screen is layered with a random arrangement of Pegs.  To progress to the next level the player must, using their own ball launcher, clear the board of the orange Pegs.  When 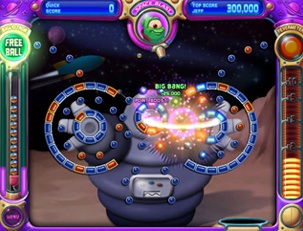 The player starts each level with 10 balls at their disposal, and can only fire them one at a time.  A player scores points for each Peg they hit, scoring more points for each Peg hit in succession, or from catching their ball in the bucket at the bottom. If a player fails to clear all orange Pegs with the allotted number of balls, they will be required to restart the level, while completing this objective allows the player to progress onto the next stage.

To spice things up, the Pegs come in four colours; blue, orange, green and purple.  Blue Pegs make up the majority on screen, and are there to make your life difficult.  Orange Pegs as mentioned above, are the objective to clearing a level.  Purple Pegs when struck give the player increased points until the players ball falls off the screen, or is caught in the bucket, while green Pegs unleash each specific Peg Masters special power.  The key to achieving successful scores in Peggle is to chain-hit as many Pegs as possible (specifically orange), while hitting the limited number of purple and green Pegs in order to multiply your score.  So far, so simple.

The iPhone version of Peggle offers an abundance of features for £1.79 on the App Store.  55 levels and 40 Grand Master challenges, a Quick Play and Challenge mode, an extreme precision wheel that allows you to fine tune your aiming, new style shots that give bonus points, a new trophy room, a save and replay function, duel mode to play against friends and family, and the ability to listen to your iPod while in game.  What’s more, total addiction to Peggle is absolutely free!

I will confess, I haven’t been able to put the game down for four days. My girlfriend is actually fighting me to play it.  We started out playing Peggle in turns, and only playing the first level of Stage 1 in an attempt to see how much we could actually score.  At first, you will be terrible.   Despite the simplicity of the game, those little Pegs seem to taunt you, while your ball seems to go everywhere you don’t want it to go and always seems to miss the bucket.  Yet with practice, it all becomes clear.  You start to chain orange, green and purple Pegs together with finesse, while watching your little Peg Master squeal in ecstasy as you wrack up orange attack after orange attack.  However like all addictions, after the highs come the excruciating lows. 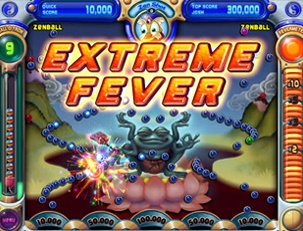 You will start to falter, and get crabby because you didn’t beat your last score.  You will stop taking it in turns because you’re desperate to improve.  You know you can beat your top score, you just need that one…last…Peg.  Your scores will dwindle, you will start blaming the game, the ball and your Peg Master, you will start shouting “Pegs aren’t where they should be!”, or “get in the bloody bucket!  GET INTO THE BLOODY BUCKET!” But you will always go back for more.  It is impossible not to.  A draw so great that even improving your score by ten points is unrivaled pleasure, and you will gloat.  Boy will you gloat.  A chorus of “OH MY GOD LOOK AT THAT SCORE.  BEAT THAT!” will be commonplace as you sit smugly.

I’ve yet to mention the fantastic pin sharp graphics, the wonderful sounds, the colourful characters, the fabulous backgrounds or the joys of unlocking new Peg Masters. All these accompany a game which is so fundamentally brilliant it belongs on every single available entertainment medium (which it practically is, thankfully).

I would also argue that Peggle excels on a hand held device. With the iPhone’s touch input perfect to use, and the game fantastic for passing countless hours on the bus, on your lunch break or just watching television.  Like most puzzle games akin to Tetris, they always seem much more appropriate when played in the hand, as opposed to being played on your PC or console.

My only minor niggles with the game is that some Peg Masters don’t seem as powerful as others, (with only four days play time their abilities may become much more apparent) while there is no Apple leader board for each stage, which would be great to show off your high scores on.

Overall however, Peggle is a highly polished puzzle game with an abundance of tactical depth and addiction in equal measure.  A game that is cheaper than any street drug, but one that desperately needs a health warning. The only question that remains is what are you doing still reading this review? Go buy it!