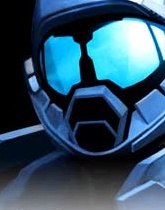 One of my favorite things about digital distribution is that it’s possible to log onto store fronts such as Steam and iTunes and access a vast range of content at any time, regardless of a game’s release date, quality or sales figures. Released on December 17th 2009, Near Orbital Vanguard Alliance (N.O.V.A) is hardly the freshest or hottest game currently adorning the iTunes archives, but has nevertheless retained a reputation since release for offering some of the best gameplay available for iPhone and iPod Touch, receiving strong reviews and overwhelmingly positive feedback on iTunes.

Having recently downloaded N.O.V.A myself, I’m curious as to whether I actually downloaded the same game or not.

First person shooters are largely conspicuous by their absence on mobile devices, but there is generally good reason for this. Standing almost as the sole exception to the rule, Metroid Prime: Hunters on Nintendo DS remains just about the only worthwhile portable FPS I can think of, making good although not perfect use of the DS’ stylus and dual screens to compensate for the lack of a keyboard and mouse or twin thumb sticks. With the iPhone offering little more than a touch screen for its user input, to build a working FPS mechanic without any tangible buttons or a stylus would appear a tall order indeed. Although not the first to try, prolific mobile developers Gameloft have remained undeterred in the pursuit of this goal.

The results are generally positive, at least by the current standards and competition. Using on screen prompts that will be familiar to regular iPhone gamers by now, N.O.V.A compensates for the lack of physical buttons with a traditional looking on screen setup. Your left thumb uses an analogue stick to move whilst your right swipes at the screen in any direction to look around. Your right thumb will also control a number of other on screen prompts, including fire, change weapons and grenades. At its core, the system generally works. Using your thumbs to move and look around feels nice and fluid and the options menu even allows you to drag and drop the touch commands around the screen to suit your own needs. 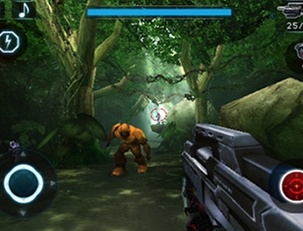 Unfortunately though, problems arise as soon as the game introduces anything more than one opponent on screen at a time. Using your right thumb to shoot obviously removes the ability to manipulate the camera, and when faced with multiple enemies N.O.V.A quickly becomes a game of cat and mouse, leaving you hopelessly strafing left and right with your left thumb in a vain attempt to line up your fire with one opponent after the other. Particularly when faced with enemies on different levels such as bridges or raised platforms, constantly switching your right thumb between the trigger and the camera is a fiddly and cumbersome affair. Issues such as a weapon switching system that is prone to sticking and the lack of a quick 180 degree turn feature can make firefights with multiple foes a bit of a nightmare. Given that these will start to occur regularly from the third level onwards, you’ll find yourself becoming very frustrated very quickly, relying on luck more than skill to make your way past waves of enemies.

The biggest problem for me, however, is not the controls or the combat, but how N.O.V.A generally feels as a gameplay experience. I’ve tried several times to get past this but I can’t. N.O.V.A is just so boring. Drawing on 15 years of cliches, it does an excellent job of taking everything bad about the FPS genre and throwing it all into one big ugly melting pot. It’s the pre-Goldeneye shooter I thought I’d never have to play again.

The story places you into the boots of Kal Wardin, an ex-marine forced out of retirement to save a colony from alien invasion blah blah fucking blah. I’ll not waste my time going into the “plot” anymore than that. It genuinely isn’t worth my time or yours, although perhaps it would be if the characters, locations and themes centered around that plot weren’t so dull themselves. Make no mistake, this is “corridor sci-fi shooter 101.” There are no risks, no deviations from a linear path and no creative ideas.

Borrowing almost shamefully from Halo, N.O.V.A feels like the mobile port Bungie would have made had they taken the terrible decision to shoehorn Master Chief onto a phone and forgot how to make games in the process. There are 13 missions, each as linear as the next, traversing such exciting locations as a space ship, an earth-like forest world, an ice planet, and the home of the aliens themselves. Feel free to take a pause to re-capture your breath at this point. The locations are genuine enough, possibly let down by some flat textures and a lack of imaginative level design if you’re feeling critical, which I most certainly am, but anybody who has played an FPS in the last 10 years will have walked these roads before. Probably even in the same order. 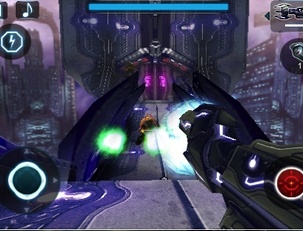 Character design gets no better. There are no surprises with the voice acting, which I guarantee you is actually worse than you think it is, and the class and behavior of your opponents relies largely on their physical appearance. The little green guys are easy to kill, the big red ones are abit harder and carry weapons. Think Grunts and Brutes from Halo but, with, errr… well, just think Grunts and Brutes. You’ll lay waste to them (or at least fight against the controls trying to) with weapons including automatic rifles, a shotgun and rocket launchers. This might be exciting if you usually spend your train journeys knitting or drawing mustaches on people in newspapers.

At this point, I’m also still unsure what to make of the game’s pacing. I regularly lost interest long before the conclusion of each individual level. I’m still unsure if this is because the levels themselves are too long or because I found the whole experience that tedious, but I’m inclined to think it could be a little of both. N.O.V.A becomes far too boring and predictable far too early, losing both the urge to sit it out for long sessions or any pick-up-and-play value, which should be an essential minimum requirement for any successful game on a portable system. Even scrolling to page 4 of my iPhone home screen to tap the game’s launch icon felt like a chore.

I’d love to be able to make concessions for these things, and a certain amount of context has to be applied when taking into account that this is an iPhone game. For me however, the platform is what makes N.O.V.A such a frustrating experience. From the outset, the game walks the walk and talks the talk, with production values and design that lull you into a false sense of security. The game looks good and runs well even on my 2 year old iPhone 3G, and clearly plenty of effort has gone into making this as much of a genuine experience as possible.

But that’s part of the problem. Utterly void of any creativity or fresh ideas, N.O.V.A is a brand new IP that feels aged and tired, paying the price for throwing together too many dated mechanics and ideas. N.O.V.A looks the part and the controls work fine until asked to fight groups, at which point the system unravels faster than an airborne toilet roll, but as an overall package the game demands you forgive too many of it’s flaws. The end result is a reasonably decent technical showcase but one which never feels like anything more than a proof of concept, and is therefore difficult to recommend as a competent or enjoyable game on that basis.

Those truly desperate for an FPS on iPhone will probably find N.O.V.A amongst the best on iTunes, but that fact should serve as the most telling evidence yet that perhaps the genre is best left to home consoles and PCs.