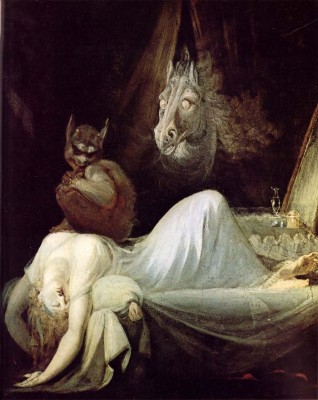 Researchers at Grant MacEwan College have been busy conducting a series of studies on gamers and their dreams with great titles like Threat Simulation Theory and Video Game Play, Video Game Play & Dream Bizarreness, and Video Game Play: Effects on Nighttime Dreams. You can see a very cool PowerPoint slide show on the last one posted here on AuthorSTREAM.  Jane Grackenbach, Ian Matty, and Beena Kuruvilla presented the latter study in 2007 at Futureplay and Grackenbach and Kuruvilla the first two at the International Association for the Study of Dreams (Montreal, 2008).They came up with some interesting findings. (Note: Findings and facts are defined differently in the dictionary.)

Using questionnaires (I know…I was hoping for wires and cranial probes too…) they queried gamers on their gaming activity and resulting dreams. They found that gamers are better equipped to handle nightmares than non-gamers. They pointed to the similarities between intense gaming and dreaming and concluded “that hard core gamers did not experience misfortune in dreams as much as norms nor did they have more aggressive dreams.” Besides the great use of the word “norms” it’s interesting in that Grackenbach and Co. are implying that gaming trains us to handle dream states better than non-gaming. Surely anyone playing a couple hours of The Path or Silent Hill 2 will be muttering and nodding their head.

You really should check out that PowerPlay presentation if only for some of the quotes from the questionnaires. Here’s one to whet your appetite:

Ah, sweet dreams are made of this.

3 Responses to Do Electric Sheep Dream of Questionnaires?