I’ve been reading a lot recently about the nominated finalists and Student Showcase winners for this year’s Independent Games Festival and there looks to be some cracking titles on the way.

It’s worth noting that there’s been loads of features across the web on the IGF and this article is by no means an extensive look at the event; just a quick glance at the titles that have piqued my interest. The full listing of nominees and winners can be seen here, while some of my favourite entries can be viewed below complete with accompanying videos. And let’s face it, we all love accompanying videos.

In the grand scheme of things I’m relatively new to indie gaming but for the last few years I’ve probably been following them more closely than anything else. In recent years independent gaming has exploded with each annual Independent Games Festival reporting more and more submissions. This year marks their highest number yet and while there has been the usual mixed views on the finalists and omissions, most notably Terry Cavanagh’s VVVVVV, there is no denying that the standard of work is improving year upon year.

If you can spare some time I urge you to go and have a look through all the finalists and winners; there are bound to be some titles I haven’t covered here that you’ll no doubt prefer. With the exception of the Student Showcase winners, many of them are unavailable as of yet and are due out later in the year but if this article puts a few on your map and compels you to explore this sublime facet of gaming then that can only be a good thing. The winners will be announced on March 11th.

nominated for the Seamus McNally Grand Prize and Excellence in Design

Oh sweet, sweet, stealthy, thieving co-op action: how I long for thee. The Thievery mod for Unreal Tournament is largely responsible for this longing and to make matters worse, none of the taffers I hosted LAN parties with ever wanted to play it anyway. Bastards. I’ve got a real soft spot for the pseudo-ASCII graphics here and it’s good to see that Pocketwatch Games have employed a line-of-sight system, because stealthy games aren’t nearly as much fun when there’s no reconnaissance involved. Hopefully the interplay between the different roles will be a riot online. I can’t wait for this. Bfgragrt!

Anyone willing to play this with me will receive extra biscuits – Extra Yummy BiscuitsTM. That’s right, my desperation has led to bribery.

“TRAUMA tells a story of a young woman who survives a car accident. Recovering at the hospital, she has dreams that shed light on different aspects of her identity – such as the way she deals with the loss of her parents.”

Trauma has a hazy, dream-like aesthetic which I think perfectly suits the introspective subject matter. Disjointed photographs flicker and splay across the screen in a way that reminds me of the panoramic photograph collages I used to do at art college. I’m keen to see how Trauma will compel players to keep exploring, because I’m not sure whether the gesture system will be enough in itself to carry the experience.

nominated for Excellence in Visual Art and Technical Excellence

I saw this years ago and was surprised to hear it’s still going strong despite there having been no further details released since then.

From Jeppe Carlsen in an interview with Rock, Paper, Shotgun as part of their IGF Factor 2010 features:

“Essentially, LIMBO is a puzzle platformer in which you play as a young boy travelling through a hostile world looking for his sister.”

So with that and the trailer above, that’s all we know. It reminds me of Eric Chahi’s Another World and Heart of Darkness, but there also seems to be shades of Ico in there too. If they get the platforming right, and it sounds like they have, this could be a real treat.

nominated for Excellence in Audio, Technical Excellence and the Nuovo Award

Closure is a very atmospheric and clever little platform puzzler. The game is still in development but the alpha Flash version that I played last year can still be accessed here. Part of the appeal, as with many puzzlers, is that ‘Aha!’ moment as you discover how to proceed, which Closure seems to have nailed perfectly. Something I also admire, judging by the trailer, is how the developers seem to have pushed the central mechanic to its limit. I’ve got to say however, that I actually prefer the low-fi scratchy appearance of the alpha version to the new one. Anyway, give it a try (note: the heart and blood gauge on the left is the loading bar, so you may have to wait before the ‘begin’ button becomes active).

nominated for Excellence in Design

I played this recently and it took me totally by surprise. On paper it doesn’t sound that interesting, for example:

Star Guard is a platform shoot ’em up where you play one of the Star Guard, a bunch of green spacemen zapping their way through the denizens of The Castle in a last ditch effort to reach and destroy their evil overlord, The Wizard. There are nine levels in total.

See? It sounds pretty humdrum but in practice it’s polished to perfection. The controls are tight and responsive, the graphics sharp and bold with crisp, chunky pixels and a bright colour scheme. The minimalist visuals are complimented by sparse bleeps, electronic clinks and crunchy 8-bit explosions. It’s well-oiled fun and just feels right. It’s marvellous and can be downloaded here.

A Slow Year by Ian Bogost

“A Slow Year is a collection of four games, one for each season, about the experience of observing things. These games are neither action nor strategy: each of them requires a different kind of sedate observation and methodical action.”

A Slow Year has been developed for the Atari VCS on a real, physical, actual, solid Atari cartridge and I don’t know about you, but I’ve been hanging on to my Atari for the last 25 years just in case there was a new release. Thank you Ian. The game will require an Atari emulator to play on a PC and Mac, so in that sense the delightfully primitive rectangular pixel graphics and fuzzy sounds are technically ‘real’. I’m not sure how this will play as it looks and sounds a total oddity but colour me intrigued.

Today I Die by Dan Benmergui 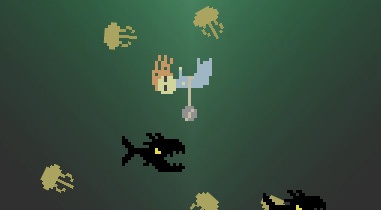 I played Today I Die sometime after enjoying Benmergui’s previous game I Wish I Were The Moon and was quickly taken by its understated power and elegance. I’d highly recommend experiencing both of these titles if you haven’t already, because aside from them each taking less than ten minutes to finish, they’re unique.

Today I Die is difficult to explain. You’re presented with an opening scene and a poem above it. The poem’s tone and meaning is synchronous with the scene itself, and certain words can be substituted with other words found in the scene. As the poem changes, so does the scene, thus revealing more words to use. The beauty is in the way the experience unfolds as the poem alters; gradually shifting the tone and meaning of the piece entirely.

Oh just go and play it.

This is up there with Monaco for me though I’ve no specific reason why. I like milk. Perhaps that’s why. Is that milk? I don’t know.

The sloshy fluid physics look an oddly satisfying and simple pleasure while the ambient music gives the proceedings a certain atmospheric edge which I’m particularly fond of. The sparse outdoor scenes and panoramic backgrounds also remind me of Braid, despite the very different aesthetic.

Strangely, Vessel is the game that motivated me to write this article and what’s stranger is that I’ve just found an article over on the Indie Games Blog saying the same thing.

From the Student Showcase winners:

It’s clear that Joshua Nuernberger is shaping up to be a formidable creative force as the main designer, writer, artist and coder for Boryokudan Rue (apparently pronounced BOY-O-KOO-DAWN). Of particular note in the trailer is the suitably grim and Vangelis-like music composed by Nathan Allen Pinard who is responsible for the game’s soundtrack.

“Boryokudan Rue is a tale of science-fiction mixed with film-noir, following two separate, while interweaving stories. First, you play as Azriel Odin, a regretful cop en route to planet Barracus to meet and extract a mysterious defector trying to escape from the notorious crime group, the Boryokudan. Second, you play as Delta-Six, an amnesiac patient in a sterilized facility, who must survive and escape in order to find out why he is there.”

If you’ve read Lewis B’s review of Beneath a Steel Sky you’ll know the two of us have a soft spot for adventure games as well as an inescapable fascination with bleak, dystopian settings. Think Blade Runner or Terry Gilliam’s Brazil. Boryokudan Rue is looking and sounding every bit as bleak and miserable as you could hope for. Making me very happy.

A couple of years ago me and my girlfriend came up with a very similar idea to this, albeit far less refined, so it’s good to see it has been well received. Continuity is a brilliant platform puzzler that revolves around a sliding puzzle feature which allows you to move sections of the level around to give your little character passage to the exit. Sliding sections of the level about and controlling your character can be switched back and forth; the tempo of the music shifts to match the puzzling and platforming respectively. It’s a simple concept delivered efficiently but there are instances where there is no way of knowing whether a drop or tile edge is traversable without resorting to trial and error, and this, for me at least, tarnished an otherwise solid experience. Nevertheless, I highly recommend you give Continuity a go.

I haven’t had a chance to play this yet but the central game mechanic looks fascinating and not too dissimilar to a certain echo visor featured in Metroid Prime: Dark Echoes. It feels decidedly eerie with its distant voices, resonant ambient music and encroaching darkness. I’ve no doubt this will be quite the creepy experience. It can be downloaded here.