Kotaku reports on Stephen Totilo’s experience with an incomplete, pre-release build of French developer Quantic Dream’s upcoming Heavy Rain, a PS3 exclusive that lots of people are watching, not only as one of the games that really leverage the inherent power of the PS3, but also as one of those exclusives that might tip the scales in Sony’s favor for the first time this generation.

Totilo’s reactions weren’t entirely positive, though; and it’s not surprising that Heavy Rain isn’t as dreamy as Quantic Dream might want us to believe. This is, after all, the studio that brought us Fahrenheit (called Indigo Prophecy in the U.S.), and what Fahrenheit really proved – and what Heavy Rain might prove as well – is the ancient adage from Confucian China: “just because a Quick Time Event is dressed in pretty clothing does not make it less a Quick Time Event.”

According to Totilo, in Heavy Rain you get to spend your time managing activities like toweling off, shaving, and selecting what dinner to feed your nearly-estranged child.

Unfortunately, and Totilo is quick to point this out, all of this stupid activity (bound as it is by Quick Time Events, whose very nature demand that you not look at action onscreen as it’s happening because you’re too busy looking at the prompts to determine which random face button to strike next) is emulsified in what’s apparently a genuine attempt to tell a serious, grown-up story that is melancholy in its best moments and downright sad in others. You don’t see a lot of melancholy games, nor do you see many that are straight-up thrillers involving no space marines or princesses to rescue. So do we go to Heavy Rain for its story and endure it through the Quick Time Events, or do we strike it down? 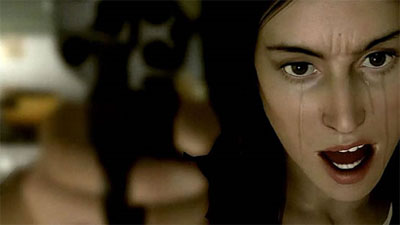 And this girl's not even in the game. She's a demo piece. She was made five years ago.

Quantic Dream has spent a fortune on Heavy Rain, and it shows. The game’s use of mocap and facial capture technology marks it as one of the most graphically advanced games we’ve yet seen, and the multitude of branching paths (the story and visuals are different based on whether you make the kid frozen pizza or mac and cheese) imply that thousands of scenes were shot and crammed onto the Blu-Ray disc, so that only multiple playthroughs will ensure that you see even a fraction of what Heavy Rain has to offer. The key question, therefore, becomes whether or not what Heavy Rain has to offer from a narrative perspective is worth enduring the wall-to-wall QTEs and tedious activity. Why are most videogames about space marines and princesses? Because choosing what to feed your brat kid for dinner and then going through the thumbstick motions of preparing it is not a fun game. And solving a puzzle of any kind through a QTE is automatic points off in my book.

But despite my misgivings, chances are Heavy Rain will wind up on my pile sometime in early 2010. I may not get to it immediately, but I do feel a certain responsibility to support this attempt at interactive storytelling. I missed Fahrenheit and though I don’t regret missing it, I was a great fan of Quantic Dream’s freshman outing, Omikron: The Nomad Soul, sharing Editor Emeritus Old Rooster’s views on the lavish, peculiar adventure. And with Heavy Rain it appears that Quantic Dream’s been given the time, the funds, and the creative leeway to actually do what creator David Cage wants to do; so there’s some validity to the postulation that if Heavy Rain sucks, we can realistically condemn the entire QTE-driven “interactive movie” idea without feeling that no one’s had a chance to make it work. 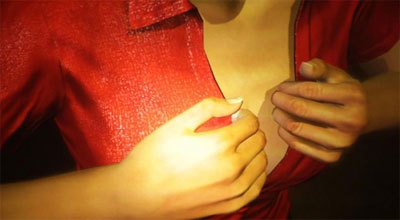 One thing that does bother me about Heavy Rain, and this is really an article in itself, but I’ll just touch on it here, is that violence against and objectification of women seems to be a core concept of the game, and its stress on “grown-up realism” make these events a little more troubling than your usual Bowser-has-kidnapped-Princess-Peach occurrences. The trailer for the game features a cheated-on wife breaking down and murdering her husband before committing suicide; a female character is forced to strip naked (in full QTE tap-triangle-to-remove-bra glory) to gain admittance into a club; the same character is pursued and brutalized by a taxidermist serial killer; one QTE apparently involves using your thumbsticks to towel off a naked woman after a shower; this stuff concerns me a little. Sure, Heavy Rain is a thriller about the search for a serial murderer. It’s adult and will be rated as such. And Quantic Dream is quick to point out that a different reaction on the player’s part will allow you to bypass or find alternative solutions to some of the stuff mentioned above. But as much as I favor grown-up depictions of stuff like sex and other adult themes in gaming, something about what I’ve observed in Heavy Rain unsettles me… as though it’s there and can be defended as “part of a grown up game,” but really exists to titillate male gamers while allowing the developer to commit to code some deep-seated anger at women. I haven’t played Heavy Rain yet, so I’ll withhold judgment, but I will say this: if the worst that I fear about Heavy Rain is true, it will set back, not advance, the opportunity to tell mature thematic stories in narrative games.

In all honesty, Heavy Rain is one of the reasons I bought a PS3. It represents the next evolution of an attempt to tell interactive cinematic stories through games, and while I feel that Fahrenheit failed, it failed while trying to innovate. I respect that. There are only so many miniskirted-teenagers-going-to-war (Valkyria Chronicles) that I can stand – great though that game is – before I wonder why gaming can’t dig deeper. Forget Citizen Kane, why haven’t we seen The Silence of the Lambs in videogames yet? Heavy Rain promises to fill that void. We’ll see if it succeeds.

Bobby Kotick Takes Flak. Unfortunately, Not from a Cannon