This week at GDC, I attended many talks. Many of them included lessons I’m still trying to unpack and digest, especially where it comes to my development work.

One of the talks happened to be on the topic of Women in Games initiatives. It was given by Mare Sheppard, who was a supervisor for the Difference Engine Initiative, a games incubator focused on female-only development. During her talk, she explained her misgivings about the initiative, discussing problems she felt existed with woman-only game development projects.

When the writeup of the talk (done by the lightning-fast Leigh Alexander), hit Gamasutra, the resulting fire that spread across Twitter could only be eclipsed by something like Fez winning the IGF.

So, it was, maybe, GDC’s third or fourth-most-controversial thing.

Lesley Kinzel, also so much speedier-a-writer than I, did not manage to get in to the talk, but really wanted to. Her article about the state of women at GDC is very thorough. I link this just to say: read it. She addresses some other problems with this year’s conference, such as “booth babes,” who to my surprise seemed more prominent than ever. In my view, this was embarrassing, though maybe NOS Energy Drink doesn’t see it that way as long as it gets people drinking their goop.

I, however, was lucky enough to get in to Sheppard’s talk. And now that I’ve had a couple days to mull over it, I’m going to give my take. The talk started out discussing problems women already face in the game industry. There was a disheartening slide that showed the ratio of men to women, and the salary imbalance between genders. It’s not very pretty. But, on the other hand, Sheppard had positive news: there are women working in games. There is just a long way to go before there is equality. 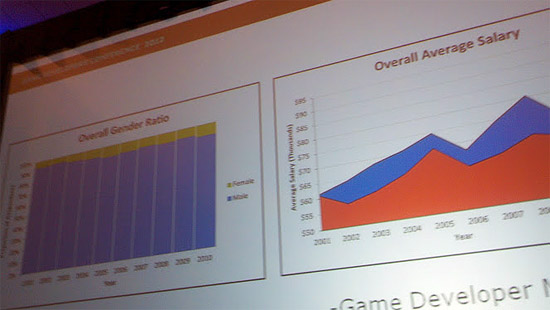 My only slide photo, a bit fuzzy. Men vs women developers by number on the left.

Initiatives like the Difference Engine are proposed to offer women a safe space in which they can learn the ins-and-outs of game development. However, Sheppard, from working closely with the incubator, is worried this causes an effect that isolates or otherizes women. She also worries that the press response to these initiatives is purely because of the novelty associated with them.

She had a great slide that I was unfortunately unable to photograph properly. On the left, a doodle of a hypothetical newspaper cover (sketched in a sort of XKCD style). The headline said “Game Developer makes awesome game,” and had a picture of a stick figure with long hair (which is to say, a stick figure coded female). The newspaper on the right had the same picture, but the headline said “Girl does Girl thing, Is Girl.” Basically, Sheppard feels that that encouraging the headline on the right makes it harder for us to get the headline on the left: a woman being acknowledged for her accomplishments, period. “This is a pretty good game” versus “This is a pretty good game… for a girl.” Or, worse, “Look the game isn’t good, but, at least you’re a girl and you made one. Good for you!”

And this is a huge, real problem. Putting all the focus on a woman’s gender can de-emphasize her actual accomplishments. In this sense, making the incubator about women, instead of just about games, changes the focus.

So, basically, I’m repeating things she said now which I agree with. But there’s then a place where I part ways with the talk, and it’s this. Sheppard used the word “meritocracy” frequently. She believes that the game industry should be a society where each person is promoted according to her (or his) skill levels, and the best person is always chosen for any given job, whomever that person might be. The problem here:

Who decides what is the best?

Who decides what skills it is most valued to be best at?

And this latter question applies to a very, very specific granularity.

A certain art style is valued in the AAA game sphere. One major example: 3D artists are valued for an ability to create amazing, gross monsters. The person who creates the coolest, most gruesome monsters is going to be in high demand, because big games need big awesome monsters.

There are excellent female artists, and awesome women who draw monsters. But the very act of drawing monsters isn’t an encouraged activity for young women. Young women are “supposed” to be interested in drawing fashionable, or cute drawings, and a big amount of our culture is set up to support that pursuit. When a woman intends to become a game artist, she has to either deliberately go against that cultural grain, or draw things she is “supposed” to and end up in the Pink Isle at the toy store. There is a pre-built barrier to entry, and doing “pink” art or games is not as highly valued. What is the most valued is driven by cultural expectations. 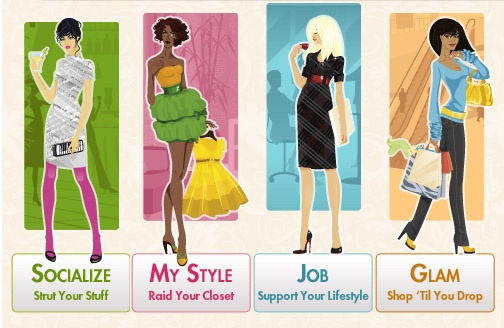 Another slide during this talk showed the strengths of diverse versus homogenous teams. A diverse team tends to be better at creative tasks, or tasks that require lots of outside-the-box thinking. A homogeneous team has been found best at executing on a known plan with a singular direction.

It’s strange to think that the task of game development is not really a creative, outside-the-box task. Often, it is: in small independent teams. But when we discuss about the employment of women, we have to look at the big companies also, companies that make big games and may have hundreds of employees. The fact of the matter is, to get in to these companies, what matters most is your execution on a known plan. That is the very essence of every piece of advice that exists about “breaking in to games.” The creativity, coming up with ideas, is “the easy part.” Execution, über alles.

By the way, do you fit in with the culture of our team?  Keep in mind our team is all young men, because men were here first and are 90 percent of the industry. So can you at least camouflage yourself as a young man to fit in while we’re adjusting to your presence? No? I’m sorry, then; it’s not a fit.

I’m not trying to be unfair. “Do you fit in with this environment; are we comfortable around you” is actually a big, important factor in how well a job works out.

This is why, sometimes, it is necessary to create an environment where someone feels better as if she (or he) fits in and is comfortable, even if it must be created from whole cloth. I am not arguing for a segregated workplace long-term, but safer spaces can lead to greater confidence from women who have been culturally segregated from male-dominated interests since birth. In the mean time, other integration efforts are also necessary, and that has to come from the inside, from men being willing to hire women and accept their points of view.

Sheppard mentioned another problem with initiatives like the Difference Engine: they’re not really for all women. As an example, I’m actually fairly comfortable working with men in male-dominated spaces. DEI is not really for me. And that… is okay. Just because a solution is not a totally perfect one, does not mean it might not also be a solution.

I think in the future, we will hit on better solutions to keep involving women: in the playing of games, in the critique of games, and in their creation. However, I do not think, as Sheppard seems to, that integration is inevitable. I think it will take a conscious effort from women and allies of women. In the mean time, one very important thing the game culture can do is stop treating women as aliens, as novelties, as some kind of sideshow. How about “Here is a great game,” and, “here are the women (or men, or people who prefer to identify with neither gender, or people whose gender is complicated but we will not be making a big deal about that) who made it.”

15 Responses to I Like Women in Games Initiatives, But It’s Complicated