I mean seriously, what is the matter with this guy?

First he decides to stir up a pointless ruckus by complaining that Valve’s Steam service is exploitative of the little guy, a conflict of interest for Valve, and untrustworthy – an act for which he is universally condemned, and called much harsher names than I’ve called him.

Then today he decides it’d be wise to further assify himself by accusing Valve/Steam’s position on PS3 sales as “childish fanboyism.” This while Pitchford’s outrageously mediocre Borderlands is – wait for it – #1 on Steam’s sales charts, and his company, Gearbox, is collecting 70% from each and every one of those Steam sales (assuming they have a fairly standard Steam contract). What is Gearbox collecting from their 2K retail contract? Well, again, assuming it’s a standard games industry agreement, you’re looking at about 12%-18% per unit.

Yeah, Randy, Steam is the problem. You headline-slurping moron. Stop squealing for attention and make a better game.

Let’s take a quick gander at my Steam main window. 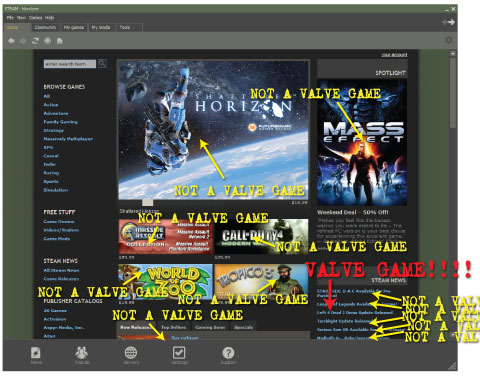 Wow, it really does seem like Valve is pimping their own games at the expense of others, doesn’t it? And I see that super-indies like World of Zoo and Shattered Horizon are barely getting coverage at all. Seems very exploitative to me.

In a recent IGDA podcast, Tom Buscaglia positively swooned about Steam, saying they were great to work with, that they paid on time, and that they outdid every other digital distributor in terms of sheer corporate gentility. Let’s not forget also that were it not for Steam, companies like Introversion and 2D Boy would almost certainly be little more than headstones, their cleverness and innovation left for archaeologists to puzzle over.

Everyone is entitled to their own opinion, however asinine it may be; and I’m sure that Steam isn’t perfect. But for Randy Pitchford, who runs a company that exists solely because of the kindness of Valve Software, a company that’s whined its way into undeserved AAA status based solely on its relationship with Valve, to attack this new distribution channel while raking in millions from Borderlands’ only partially deserved success (the game is good at best, more likely okay; will mostly be recalled for what it did wrong and will soon be forgotten altogether), for some reason that really offends me. The alternative for Borderlands was its retail contract, an agreement with 2K games that is doubtless proving lucrative (after all, Steam only sells in the PC space, and Borderlands is very obviously an inept console port), but simple reductive mathematics tells us that 70% developer royalty per unit on Steam beats 14% developer royalty per unit via retail channels. And yet Steam is somehow the bad guy in this.

There is one Steamy issue that does cause me concern; both Stardock’s Impulse online service and IGN’s Direct2Drive have refused to carry upcoming blockbuster Modern Warfare 2 because the game comes bundled with a mandatory Steamworks installation. Steamworks manages saves, online presence, and various other actions of a game through a single unified SDK, and I can understand why Impulse and Direct2Drive are hesitant to sell a game that bundles the software of their competitors. But Steam is not requiring this bundle – or, rather, it is, but only because Modern Warfare 2 developer Infinity Ward used those tools to create a portion of the game’s functionality. This is not exactly the same as Microsoft bundling IE4 with Windows 98 to force out competition. After all, Valve has every right to not carry an Unreal Engine 3-powered game, given that Valve owns and markets the competitive Source engine.

And yet, Borderlands is Unreal 3 powered. So is Mirror’s Edge, Bioshock, Shattered Horizon, etc etc etc. Call me a Steam fanboy, but I see it this way: while Pitchford whines, and Direct2Drive chest-beats, and Impulse squeals about how it’s the real indie homestead, Steam dominates – not through evil, or exploitation, or squeezing the little guy, but through savvy business practices and a recognition that in this day and age, getting the games to the players is more important than the games themselves, even if getting them to the players means shooting the same damned horde of Skags and the same stupid raiders every time you leave town no matter how many times you’ve shot them.

7 Responses to Randy Pitchford: Dropped on Head as Baby