Here’s the frustrating thing about Jade Raymond – no, not that Assassin’s Creed was a crappy game, the other frustrating thing: despite deserving it, she will never be taken seriously by this industry; despite all her successes, despite her intelligence and capability, despite the fact that she’s absolutely qualified for this promotion, just as she is qualified to manage 200-person project teams on huge international releases. No matter how many times she succeeds (it sucked, but Assassin’s Creed moved 12 million units), no matter her level of commitment or effort, she’ll always be Jade Raymond first, and a games industry professional second. 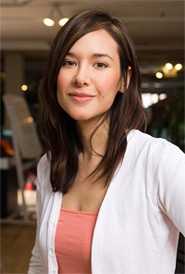 Because Jade Raymond is hot. Look at her. Supermodel-hot? Maybe yes, maybe no, depending on your perspective; but few could argue that she’s a very attractive young woman. The fact that she’s pleasant, intelligent and articulate (in two languages!) doesn’t hurt. Fact is, women in the games business are still comparatively infrequent occurrences. Attractive ones less so. Ones so attractive that companies like Ubisoft can leverage that attractiveness to drive attention toward specific products? That’s blue moon material. But is it fair? Is it right?

What bothers me is that Raymond isn’t some hand puppet. She’s got a degree in computer science from McGill U, she was a line coder for Sony Playstation and helped found Sony’s initial R&D group. She’s lead teams for Crayola, EA, IBM, and – obviously – Ubi. She’s got game, she’s got cred. And yet all anyone can seem to talk about is her looks; in fact, when Assassin’s Creed, admittedly shitty, came out, it was rapidly followed by an underground online comic that basically said that you’d get a blowjob from the Ubi producer if you bought the game. Said comic sprawled across the entire interwebs when Ubi lawyers were mindbogglingly stupid enough to attempt to destroy it with a cease & desist, and for a while Raymond and Assassin’s Creed-based oral sex were the talk of the town.

Meanwhile Spore, equally disappointing, gets Will Wright opportunities to interview leading biologists on NPR. Raymond, on the other hand, is gossiped about as dating Sony’s Phil Harrison… though at least most sites had the decency to mock it. Nonetheless, do we not see a disparity there? Between a funny-looking dude who made a bad game getting the opportunity to demonstrate that video game makers are intellectual people fascinated by many things, and a beautiful female who made a crap game getting accused of whoredom and pasted on who’s dating who websites?

For as far as we’ve come, in so many ways, it also reminds me how far we have to go before genuine equality is reached. In fact, I find myself wondering if it will ever be reached at all. Here I am, railing against the mistreatment of someone with perfect qualifications for the jobs she’s done who also happens to be attractive and female, yet to be perfectly blunt the first thing I think when I see Jade Raymond is “gosh, she’s pretty.” How can we manage to achieve true parity between the sexes when even the people who want it have a hard time getting past the initial colonial reaction?

When the blowjob comic came out, Jane Pinckard of Game Girl Advance posted a thoughtful article in defense of Raymond, one that took Ubisoft to task for manipulating Raymond’s image to sell copies of Assassin’s Creed, and that reminded us how much farther this industry in particular has to go when it comes to treatment of women. Amusingly, Jane Pinckard is also a very good-looking, intelligent, articulate, skilled woman in the games industry. I imagine given what they’re likely to endure on blogs and message boards each day, such specimens are wise to stick together; but there’s nothing about Pinckard’s article that suggests she’s doing it as a “favor” to another pretty girl. No, she’s pissed that women are still treated this way, and so should we all be; in their chosen industry, Raymond, Pinckard, and other XXs face an even uphillier battle than most, and it’s an uphill battle under the best of circumstances.

I like Ubisoft, though I have bashed its recent games, from Prince of Persia and its Epilogue to Far Cry 2; I never got around to ridiculing the company for putting World in Conflict developer Massive onto MMO duty when the developer has zero experience in that field. I like Ubisoft because of its talent pool, particularly in Montreal – people like Clint Hocking and Patrick Redding, and Jade Raymond, people who really seem committed to trying new things even if it means getting them oh so desperately wrong.

But that’s from a games perspective. Ubi is – as Jane Pinckard reminds us – responsible for the Frag Dolls; and Ubi unquestionably used Jade Raymond’s looks to their advantage when pimping Assassin’s Creed. It makes them money. What bothers me is that when it comes to this tap to head her own studio, Raymond undoubtedly is qualified, and almost certainly deserving. But no one will ever be convinced that the promotion was the result of anything other than the exterior, even if she drives the place to success after success. And whose fault is that? Ours, as much as Ubi’s. What bugs me most is that it’s so built in now that we might never be able to move beyond it.

5 Responses to Better than the David Caruso Movie