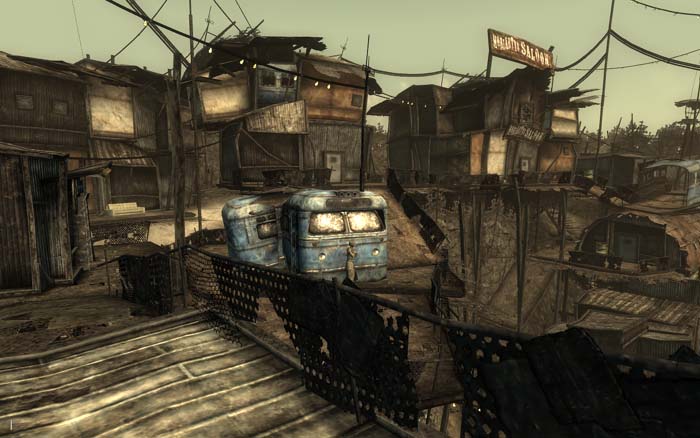 After a long wait, Fallout 3 hit the shelves Tuesday. Since its precursor, Fallout 2, was released by Black Isle in 1998, a new generation of gamers have come of age having never played either of the original games. Few thought a third game would actually see the light of day. Then Bethesda bought the rights and soon after announced Fallout 3. Its last blockbuster game, Oblivion, had been greeted with a surge of early critical praise that had turned negative as more and more people tuned in. Everyone waited to see what would happen to Fallout 3. Would it be Oblivion with guns? Morrowind with gun? Would it be a big, bland RPG with shooter elements. Or a fat, expensive shooter masquerading as a RPG?

I’ve been playing for a few days now and it’s holding up nicely. As announced, Bethesda built Fallout 3 on the same engine they used for Oblivion and the results are promising. Though they are thematically as far apart as two series can be, there are some basic parallels between the Fallouts and the Elder Scrolls, especially at the start. Both series begin with a single player in a vault, a cave or a crypt and both school the player with a short tutorial before they emerge. Once out of the cave/vault/womb you are dumped into a  sprawling, wide open gameworld. You can head off in any direction you want and play however you want. The options are almost staggering and there is the rub. Without the firm guiding hand of a strong narrative, a player can wander forever and never find the thread. With Black Isle this wasn’t so much of a problem. With Bethesda it can be.

I’m happy to report they took the best of Oblivion (along with the usual Radiant AI quirks) and melded it surprisingly well with the Fallout universe. It plays as a hybrid turn based RPG cum FPS. The newly developed V.A.T.S. system of combat, (Vault-Tec Assisted Targeting System) adapted from the old Fallout style turn based targeting system, is effective and often thrilling. While playing in first person shooter mode, you can stop the action and set up your shots by aiming at the foe’s various body parts. Chances of hitting your target are displayed in percentage points. If you’ve played either of the earlier games you will pick this up quickly.

I spent the first two days down in post apocalyptic Washington D.C., where as one NPC put it, “it’s a war zone”, and V.A.T.S worked great in some very tight spots. Whenever you come onto an enemy you can hit “V” for V.A.T.S (you can assign your key if you want), blast away, then retreat and wait for your AP (Action Points) to replenish. Once the AP bar fills up you are be free to turn, target and toggle back into V.A.T.S. again. When a player triggers V.A.T.S. the game switches into often jarring third person animations, with bullet time, extreme camera angles and exploding bodies. The animations can be unpolished and the abrupt cuts only emphasize this.  Sneak is very effective here and allows you to catch an opponent off guard. This greatly increases chances of a critical hit. Even when you are deep in the maze of rubble, tunnels and bombed out buildings that comprise D.C., you have lots of options and rarely find yourself trapped.

At the end of the second day I decided to hit the empty wastelands that fill most of the map. Using fast travel (hear the purists wail) I found a settlement, sold my loot, healed up, picked up a bunch of quests and map markers and headed out across the great emptiness. After the never ending fire fight that was D.C., this felt a little less compelling though it was a bit of a relief.

There are some problems you’ll recognize if you’ve ever played Morrowind or Oblivion. Trees and objects float eerily in the air, the dialogue is a bit flat and the characters tend to be of a type, to put it bluntly, a stereotype. There has always been a coolness to Bethesda’s games, a sort of mechanical, slick surface that can be a bit off-putting for some. Indeed, what I’m missing most so far is that subtle sense of irony Black Isle brought to Fallout and Fallout 2. I was looking over the original  boxed games yesterday, reading the manuals and scanning the graphics  and remembered again the magic of the Fallouts, the sly, dry, wicked humor and the  warm, almost charming graphics. I’m not getting that yet in Fallout 3 and I suspect I won’t. What I am getting is a potentially great game if, if, IF…. it remains true to the spirit of the original series and doesn’t become weighed down by overblown ambitions. The gameplay is extremely addictive and I’m finding myself playing into the wee hours of the morning. So far it’s thumbs up.

I think this game will redeem Bethesda’s rep a bit after all the hits they took for Oblivion. If they have done nothing else, they have stepped up and delivered one of the more solid games to come down the pipe in a while. Fallout 3 balances atmosphere, character, and gameplay nicely. There’s not exactly a compelling story so far, or the story is so overarching I haven’t detected it yet. No matter, it’s a no brainier buy if you are a fan of either series or just like world class gameplay.

I’m playing on a two-and-a-half year old PC gaming rig at mostly medium to high settings and the game is running smoothly. Load and save times are very fast, a relief after the interminable waiting in The Witcher, and I haven’t hit any bugs other than a single crash to desktop. The real test will be how long it holds my attention in the weeks to come. Like I say…so far, so good. Actually, so far, very good.