I have too many delightful gaming memories to ever choose a favorite, but I can point at one and say it’s definitely among the best gaming experiences I’ve ever had. It was the weekend I spent with two of my best friends, sprawled on a sofa, playing co-op Ghost Recon: Advanced Warfighter 2 in splitscreen. You don’t see games that support that very often, and we love them.

We had no idea how to play the game. We had no instructions and had never played online or in the campaign. GRAW2 is the most unforgiving kind of tactical shooter, and even simple moves like reloading took a while to figure out. Hyperbolic difficulty and sharp learning curve notwithstanding, we stuck with it, and over the course of about 40 largely-straight hours we completed the entire co-op campaign. We stopped to catch some sleep around 4:30 a.m. each day, and all my dreams were viewed through a sniper’s scope.

GRAW2 physically hurt us. McShane, Pete, and I are all a little closer to 40 than to 30, and even when we were closer to 30 than 20 the days of us being able to spend an entire weekend playing a game in an alcohol- and Red Bull-fueled haze were probably behind us. Playing GRAW2 demands a full-body investment: muscles clenched, back tense, neck corded out, teeth grinding, knuckles white. It’s the most physically stressful video game I’ve ever played. By Sunday we were all hunched over and whimpering like the old men we are, but we had loved every minute of it. 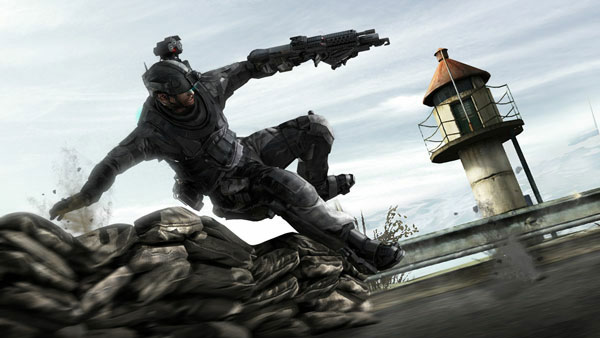 Thus we were very excited when the infotrickle about the long-in-development Tom Clancy’s Ghost Recon: Future Soldier (say that ten times fast) mentioned that it would support splitscreen and have a full co-op campaign. For the purposes of understanding how impressed I am with this game, you have to understand that: I never intended or expected Future Soldier to be anything more than a game I’d play splitscreen when my friends were around.

Imagine, then, my surprise when I discovered a single-player game that held my attention all evening, combining the best elements of GRAW and the best elements of Splinter Cell Conviction into a squad-based tactical shooter that streamlines the overbearing complexity  while retaining the dynamic realism so integral to the format. It’s true that Future Soldier plays more like a traditional shooter, with sticky cover, fast reloads, and set-piece “boss” battles. But it feels like a tactical shooter.

At least, the single player campaign does. Since I haven’t had the boys over for some splitscreen Future Soldier action yet, I can’t say what the local co-op is like. The local co-op for GRAW2, at least, was markedly different than the campaign. The same may be true here; I’ll have to withhold judgment. 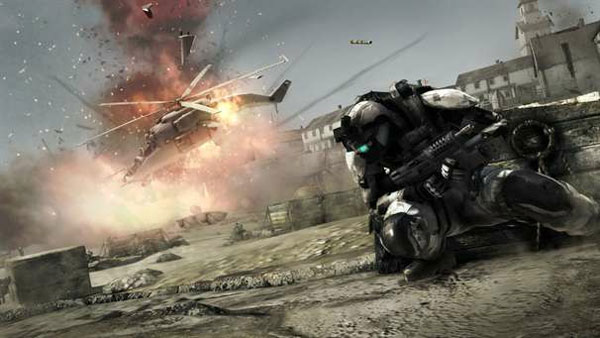 A slick, medium-paced third person game, Future Soldier’s campaign puts you in with a company of Ghosts – covert special forces advanced enough that they’re the guys SEAL Team Six calls when it needs the pros. Hunter Squad’s Ghosts are the usual mix of military game personalities, toned down slightly from Bad Company’s caricatures. You’re Kozak the quiet scout, alongside Pepper the likeable curmudgeon, Ghost Lead the stern fearless commander, 30K the rough and tumble rough and tumble guy, and Twisting the sexy-voiced helicopter pilot. After another squad of Ghosts gets creamed taking down a bomb headed for the Mexican border, your squad is sent in to figure out what’s what, and you’ll put a lot of miles on your frequent flyer plan doing that.

In Tom Clancy’s universe, the rest of the world should gently rub its testicles on America and thank it for deigning to share a planet where every other place is so markedly inferior. The United States can do no wrong, other nations can do very little right, and every American (except liberals) is secretly a hero simply for having been born here. Hell, one of the villains early in the campaign is a private military corporation called Watchgate, a mercenary company that’s kidnapped a CIA officer and whose paid employees are terrorizing locals in west Africa. And since America can’t do anything wrong ever, all the employees of Watchgate speak with Australian accents. Because that country is known for privatizing warfare and hiring brutal and unqualified thugs to handle what trained soldiers should be doing. 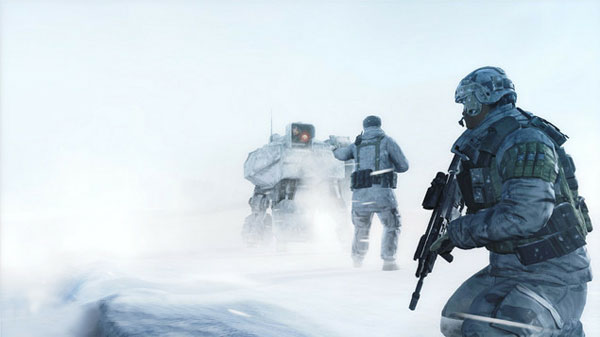 Fortunately all this ooo-rah is tied to a game that is really a lot of fun to play. Clancy’s Red Storm studio and its collaborators – in this case Ubisoft Paris and Ubisoft Romania (it cracks me up that most America Porn comes from overseas) – have gotten really really good at doing what they do. Cover isn’t the stop-and-pop of Gears, it’s a combination of proper movement, protection, and stealth, and handled contextually (and perfectly) by a single button. Conviction’s mark-and-execute system makes an appearance too, as Kozak the scout tags enemies that he and his squad can then simultaneously pop when stealthy precision is required. Controls are shooter-simple but feel clean, slick, elegant; only once or twice did I not do what I intended. Plus you really feel like a special forces bro deep in a warzone; you dodge and rush, press, dart between cover, go prone, listen in on your fellow Ghosts’ chatter as they identify new contacts or take out enemies.

And because these are the soldiers of the future, you get lots of kickass new future soldier tech in Future Soldier. Everything from optical camouflage to tossable sensors to a transformer drone capable of aerial scouting and land-based scooting. Kozak’s part of a team, and the Future Soldier developers were wise to put him in the scout role. You control the drones, you mark targets for your buddies to lock onto, and you also can feel free to pull the trigger yourself. When an area needs a good hard airstriking, you control the missiles, and when your Ghosts are on the ground chasing a vehicle, you might be up in the air providing gunship support with Twisting the sexy-voiced helicopter pilot. The AI actually seems to be working with you, because you’re not issuing orders – that’s Ghost Lead’s job, and the job of Overlord, your commander back on the carrier. If you’re not issuing orders you don’t get frustrated when your bros don’t follow them. Instead, you’re doing your job while they do theirs, and the team works well together. 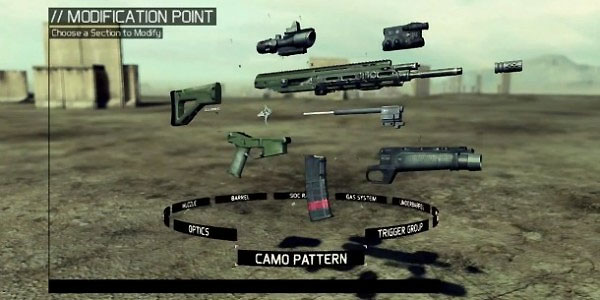 GRAW2 was famous for an absurdly large database of customizable weaponry. In Future Soldier that seems toned down a little, though that may only be in the single player campaign; a lot of equipment is unlockable once you accomplish a variety of near-impossible challenges during missions (kill ten foes with a sniper rifle from a distance of more than 300 meters without moving, for example; something that might happen in an arena shooter but is unlikely in a tactical military simulation). Hopefully the entire database will be available in co-op, because my friends and I are so inept that we’ll still be using pistols in the tenth mission if we’re expected to unlock every weapon we’d like to use.

In fact, the only strong complaints I have about Future Soldier lie largely outside the game. First, for reasons known only to Ubisoft, Future Soldier includes Kinect support, a completely pointless addition that largely serves to annoy me by demanding that I calibrate my Kinect every time I enter the wrong menu. Annoying, but I can overlook it.

What thrills me less is the UPlay pass, or UbiPlay pass, or whatever it’s called. We’re seeing the rise of Games Designed To Thwart Players Who Dare To Buy Secondhand, and apparently this is Ubisoft’s effort. See, I got the game new, so there’s a code in the box that I can redeem to set up my UPlay account. But if I were to trade this game in, whatever fool bought it next would have to pony up ten bucks (or something) in order to access the multiplayer, as well as several offline aspects of the game. 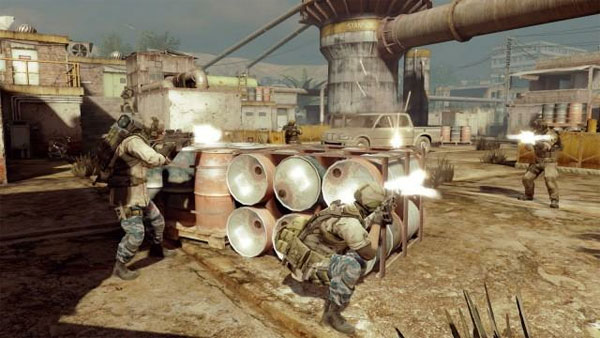 I’m not going to get into a tirade about the secondhand games debate, but this is no solution. It irritates me, it will infuriate used buyers, and if it continues, it’ll encourage publishers to ever-more draconian demands that we pay extra to unlock game content we’ve already paid for once. Believe me, it’s only a matter of time before I buy a game, sealed and new, for $60, and then am expected to invest another $X if I want multiplayer, even though that capability is on the bloody disc. No, it’s stupid, but it won’t go away unless consumers vote with their wallets… which in the gaming space consumers have historically proven unwilling to do.

Pete does yoga so he has more energy than McShane and me. At one point during the weekend he decided to try the single player campaign of GRAW2 while we slumped on the couch, drinking beer and watching him. 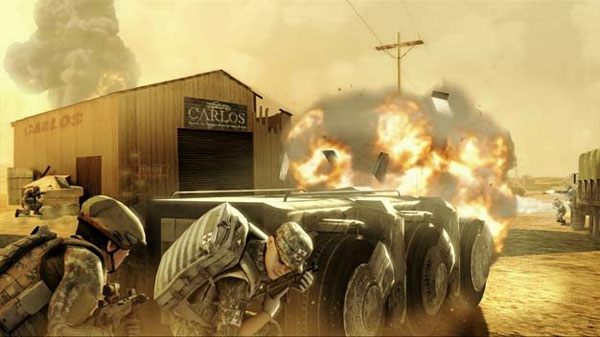 What he found was a very, very different game than we’d been playing in the splitscreen co-op. The latter was a first person Rainbow Six-ish tactical exercise of staggering difficulty (made more challenging for us because we never figured out how to use the drone); the former was a more straightforward third person shooter that retained its tactical flavor but wasn’t remotely as punishing as what we’d been doing in co-op. So I’m not sure what we’ll encounter when we fire up Future Soldier’s splitscreen, though since that’s what I ostensibly got the game for I hope it shows the same detail and effort that GRAW2’s did.

The truth is, though, even if it’s a huge disappointment I’ll still get my value out of Future Soldier. I may not be 100% on board with everything they chose to do, but so far it’s a hella fun game – funner, even, than the singleplayer campaigns from Modern Warfare. The controls bring tears of joy to my eyes, the aging YETI engine looks fantabulous, and honestly I haven’t enjoyed shooting foreigners this much since McShane, Pete, and I went to town on those damn dirty Nicaraguan terrorists last time. Ooo-rah!