Time is running out to avoid a general strike among video game voice actors represented by SAG-AFTRA. The union has been in negotiations with major publishers for several months now, but so far neither side seems willing to give on its expectations. Eighty percent of game voice talent isn’t union, which makes their side a difficult one. Strike may be the only way to be heard.

SAG-AFTRA and the talent wants to renegotiate standards for four sticking points in the existing voice talent/game relationship. (You can see the union’s more comprehensive explanations here).

Stickiest of all is the expectation for compensation bonuses if a game performs well. This is the elephant, and frankly it’s also the one I’ve tended to side with management on. But not any more; at least, not based on the union’s very reasonable request.

The reason I’ve tended against the idea of performance-based royalties in games is that the role of voice actors is very different than the role of screen or stage actors. A lot of voice actors have said they deserve royalties for game sales. Actor Michael Hollick, who voiced the lead character, Niko Bellic, in Grand Theft Auto 4, caused a stir a few years ago when he essentially argued that he deserved a whole-number percentage of the game’s sales on account of his contribution.

Over fifteen months, he provided the voice and mocap for Niko. Given the scope of the game and the size of the role it must have been a pretty exhausting, highly taxing time, for which he was paid $100,000. A large sum, but a drop in the bucket compared to what Grand Theft Auto 4 wound up making.

Hollick’s performance was very good; he showed Niko as a complex duality between past and present, kindness and cruelty, hope and reality. It was not an easy role to nail and motion capture is never easy. A hundred grand seems like a pretty good paycheck, especially since the GTA4 credit would surely help land him more work in the future. And GTA4 was successful to the tune of twenty-five million units.

But Michael Hollick’s performance didn’t sell a single copy of Grand Theft Auto 4. Anyone who says otherwise is deluding themselves.

Look, Hollick/Bellic was the “face” of GTA4, insofar as his voice issued from this face: 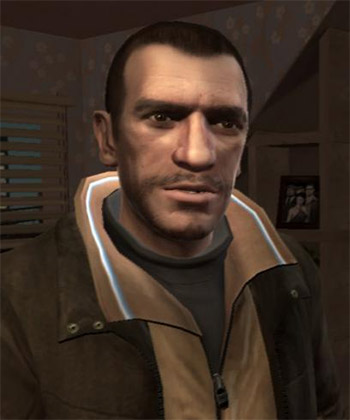 And when that face moved around its movements were basically those of the actor underneath the graphics. Niko-the-protagonist was an important part of GTA4’s inexplicable appeal; in fact, I played hours more than I would’ve otherwise just because I liked Niko and hoped things would turn out okay for him.

When GTA4 did well, Michael Hollick did two very foolish things on record:

a) revealed what he’d been paid

(A) is bad form. (B) is idiotic, and it kneecapped Hollick’s voice career more effectively than anything Niko or his friends ever did to an enemy. Because revenue percentages should be reserved for people who actually contribute substantively to those revenues, and a strong argument could be made that Michael Hollick — while he was a contributor — is nowhere near first in line for bonus handouts.

Hollick worked for fifteen months on GTA4. Not fifteen months straight, but on and off as needed for that period. The mocap was probably done in a single month of shooting, and then there was studio time for recording and rerecording, and pickups, until the game was mixed and mastered. Compared to Rockstar employees that may have worked full time for five or six years on GTA4, that’s not much of a contribution. And despite Hollick’s admirable performance, Niko Bellic could’ve been played by any of a thousand other actors and nobody would have cared.

I can think of maybe three or four occasions when an actor’s performance in a video game made a real difference, like a real difference, like “this game wouldn’t be as good, wouldn’t be as much fun as a game, were it not for this performance.” Michael Mando was terrifying as Vaas Montenegro in Far Cry 3. JK Simmons as a pitch-perfect Cave Johnson in Portal 2. Ashley Suzanne Johnson  glittered as Ellie in The Last of Us. And then there’s fan favorites, like Stephen Russell as Garrett from Thief and Nolan North as Nathan Drake in Uncharted. But even at their most impactful, they didn’t sell games, or prevent the sale of games. Period.

So I’ve always rolled my eyes at the idea of VO talent getting royalties based on a game’s retail performance. But that’s because most demands I’ve heard have been along the lines of “I should get X percent of the sales.” That’s not what SAG-AFTRA is asking for. In fact they’re asking for very little, unless I misunderstand the language of their manifesto:

It’s a simple approach to secondary payments, and it’ll net you up to four extra union scale payments for your performance (currently $3300.00).

And there’s just no good reason to refuse that.

As for the rest, it’s nothing more than fair treatment and acknowledgement of health and safety concerns… any session with potentially voice-damaging performances should be limited to two hours and the talent should get “stunt” pay (they’re risking their tool of the trade); a stunt coordinator onsite during stunt mocap;  and more transparency about the projects they’re working on — title, character(s), motivations, etc. That one is important for two reasons: first, to avoid the A Serbian Film effect, by which notable actors are essentially tricked into roles they’d never ordinarily take; also because many times we critics bash actors for sucking when it’s not the actor’s fault. How well can anyone play a role when they’re given a stack of lines, out of context, with no one to play off of, no story background, and no direction?

SAG-AFTRA also quite rightly takes umbrage with some of the more draconian and/or sweatshoppy requirements that publishers and studios have tried. It’s not uncommon for a single actor to be told — on the day of recording — that “since he’s here,” he’ll be playing the role for which he was hired plus, oh, thirty-five supporting roles, all of which call for different characters and voices.

Actors called bullshit, and good on them.

Some clients (it doesn’t say who, but I can guess) want to fine talent and agents for absurd stuff like declining to audition or being “inattentive to the services for which [they] have been engaged.” Say what? As of right now you all owe me a thousand dollars — each — for being inattentive to the, um, dusting and general maintenance of Tap-Repeatedly. BAM!

With lots of noteworthy voice and game actors already voting yes to strike and encouraging others to do the same, it seems likely this will come to a head pretty soon. And while I can’t get on board with some VO actor earning residual millions because a game she worked on sold well, I can definitely support the idea of talent getting reasonable bonuses for being part of good work. As for the rest of the stuff they want, well, Mitt Romney would have a hard time coming up with reasons why stuff like safety aren’t written into every contract.

You can learn more about the possible strike here at GamesIndustry.

Send PayPal information (to pay the fine you owe) to Steerpike@Tap-Repeatedly.com.

As long as we put up with it