The Nordic Games Conference is going on right now in Sweden. There’s a vibrant Scandinavian developer ecosystem out there, and interesting stuff often comes out of this event, which I imagine to be rife with Viking-related imagery such as mead and hats with horns.

GamesIndustry.biz reports on a fireside chat (possibly in a longhall!) between Massive Entertainment’s Managing Director David Polfeldt and Fumito Ueda, the legendary artiste behind Ico, Shadow of the Colossus and (ZOMG) The Last Guardian.

Among other things, Ueda sort of reveals that he’s working on a new game, which is kind of a surprise. I at least had assumed he’d lost interest in game design, but his remarks seem to indicate the opposite. Which is exciting.

Ico and Shadow of the Colossus both belong in the Smithsonian;  perhaps expectations were unfairly high for The Last Guardian, which finally arrived last year after nearly a decade of agonized development that spanned two and a half console generations and landed with a forgettable kerplunk amid meh reviews.

It’s not that The Last Guardian was bad. It wasn’t bad by any reasonable metric. But it was… hmm.

I don’t know, to me it felt over-engineered, which maybe isn’t surprising given the ridiculous development cycle. It felt like it had long since misplaced the forest for the trees. I personally found it rather tedious, and drifted away from it pretty quickly. Quickly enough that I can’t really judge it fairly beyond my rather trite early impressions. What struck me most about The Last Guardian was a personal revelation, which I will now share even though I really just wanted to post a quick note about Ueda working on a new game. We’ll get back to that in a sec.

My cat Ozzie was a gift from my parents for my 23rd birthday. Here she is, providing scale for a photo of the Steam Controller: 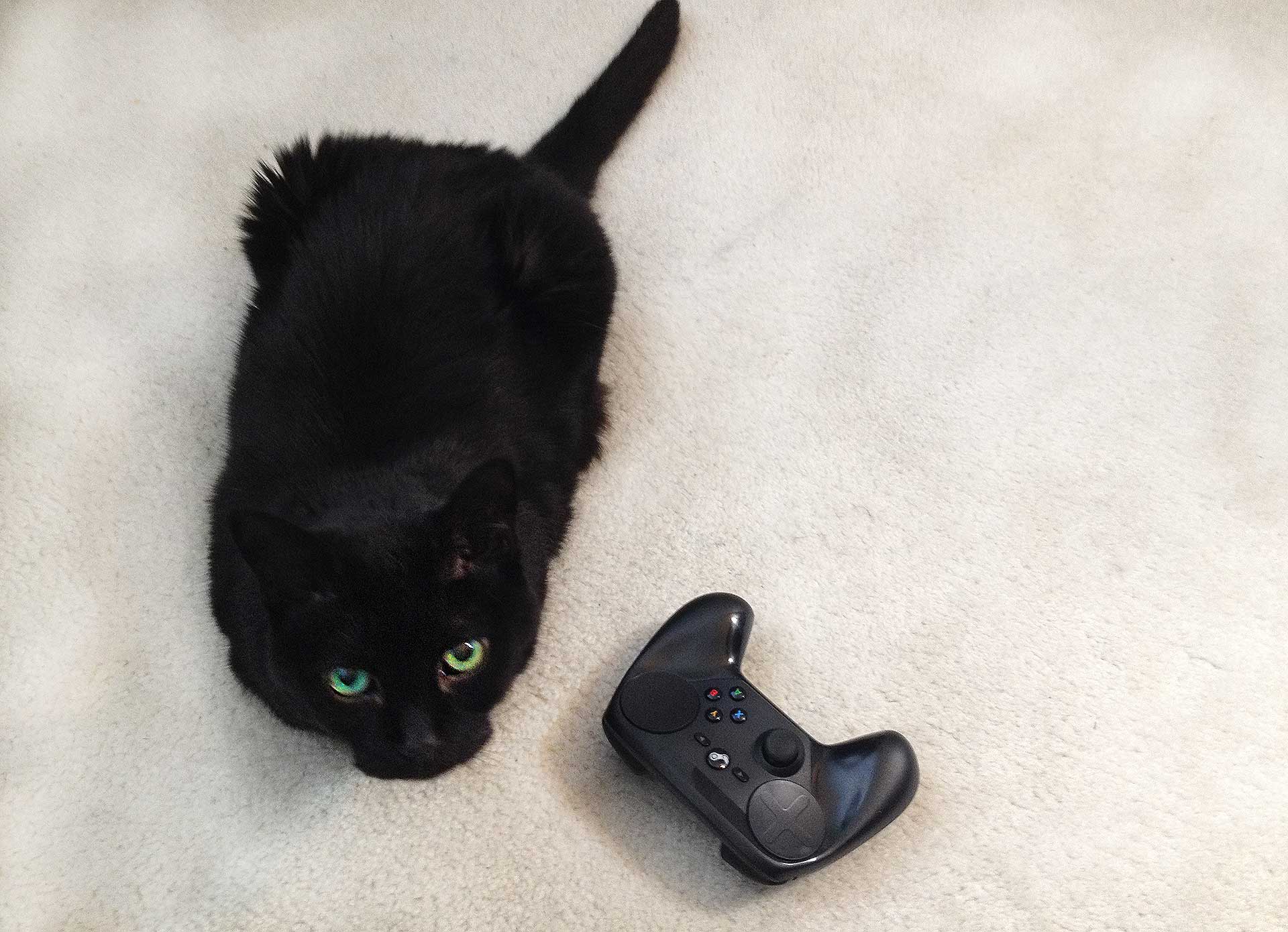 Ozzie died in 2016 after eighteen years of feline servitude. Anyone who knew her would be entirely unsurprised by the fact that she died eighteen years to the day from her 1998 arrival in my life. This made my 41st birthday quite depressing, but Ozzie kept her own counsel; she liked order and structure and routine and to her, going out on the same day she came in made perfect sense.

It’s probably fair to say that most people would describe her as a rather unlikable cat, but that’s their loss. Ozzie was a different animal around me: sweet and affectionate, though you only have my word on that because if anyone else was present she manifested as nothing more than a pair of headlamp eyes glaring at them from a nearby shadow. Ozzie had a very strict interpretation of the universe. It consisted of me, her, and our home; anything else was alien and unwelcome, an eldritch impossibility from beyond her conception of reality. That’s a fancy way of saying she hissed at people, even people she’d known her entire life, unless those people were me.

(Ozzie did accept my friend McShane, who somehow ingratiated himself with her when no one else could. When she died, he said “I’ll miss her. I was fifty percent of the people she loved in the world.”)

Anyway, after a suitable mourning period my family bundled me into a car and took me off to a shelter and I came home with Iris: 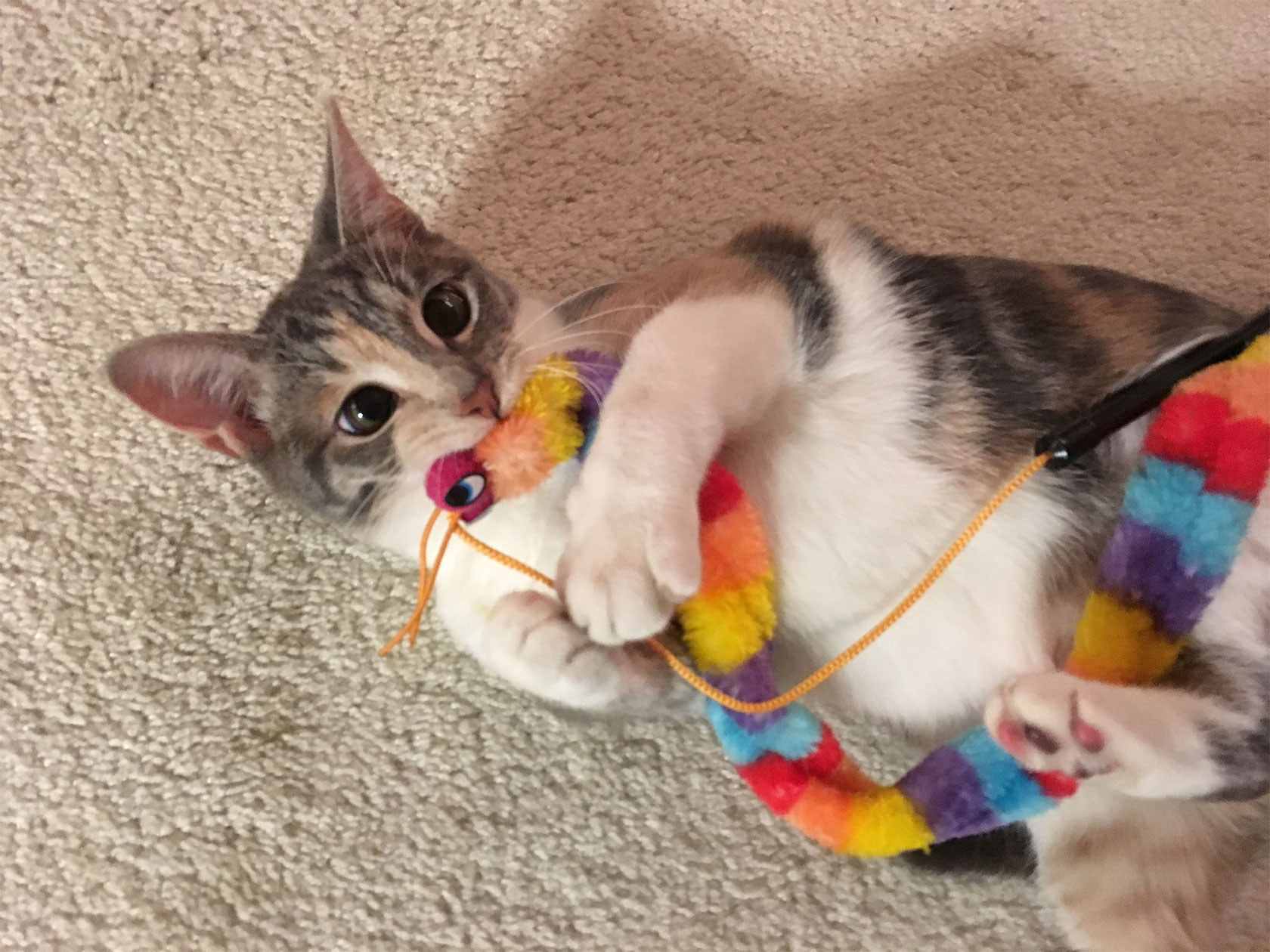 If Iris and Ozzie had met, they would have exploded, because nothing can come into contact with its precise opposite and survive. Ozzie hated all life; Iris is the sweetest creature in the world. Ozzie decided early on that she was only interested in me and tuna fish; Iris is so inquisitive I can’t open the door without first penning her up. If you tried to touch Ozzie, you’d lose a hand; Iris yearns to be rubbed by all people in all places at all times.

Maybe a month or two after I got Iris, The Last Guardian came out, and I was immediately struck by the fact that this game is basically about having a kitten. 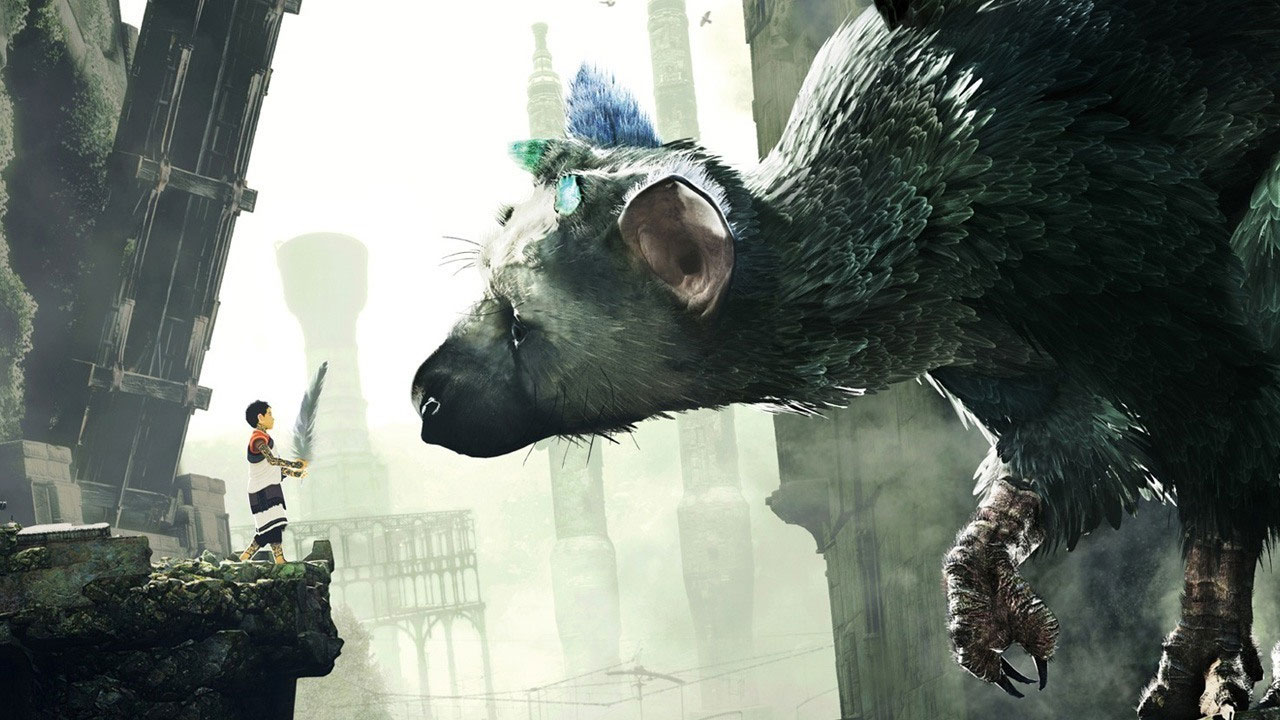 That creature on the right there is called Trico. It’s sort of a kitty-eagle thing, chained up in a crumbling, sun-dappled castle, polka-dotted with spears and (apparently) left to starve. The little boy, in what can only be described as a monumental fit of bravery, climbs aboard and pulls the spears out, then frees the beast, perhaps intending to employ it as a deterrent to bullies.

From then on The Last Guardian is basically a game of convincing Trico to go where Trico does not wish to go.

Subtract the kitty-eagle and The Last Guardian is a straightforward platformer of assorted jumping and climbing puzzles. Include the kitty-eagle and that’s still what it is, but with the added mechanic of a giant fucking kitty-eagle that’s perfectly capable of crashing through obstacles, clawing down buildings, flying the lad across great chasms, and compressing anything that threatens him into putty.

Hold a mirror up to The Last Guardian and you’ll see Ico, Fumito Ueda’s lyrically beautiful debut, which was of course basically a game of convincing Princess Yorda to go where Princess Yorda did not wish to go… or maybe just didn’t understand that that’s where you wanted her to go.

Where the willowy ghost princess of Ico is defenseless, Trico is quite self-evidently not. 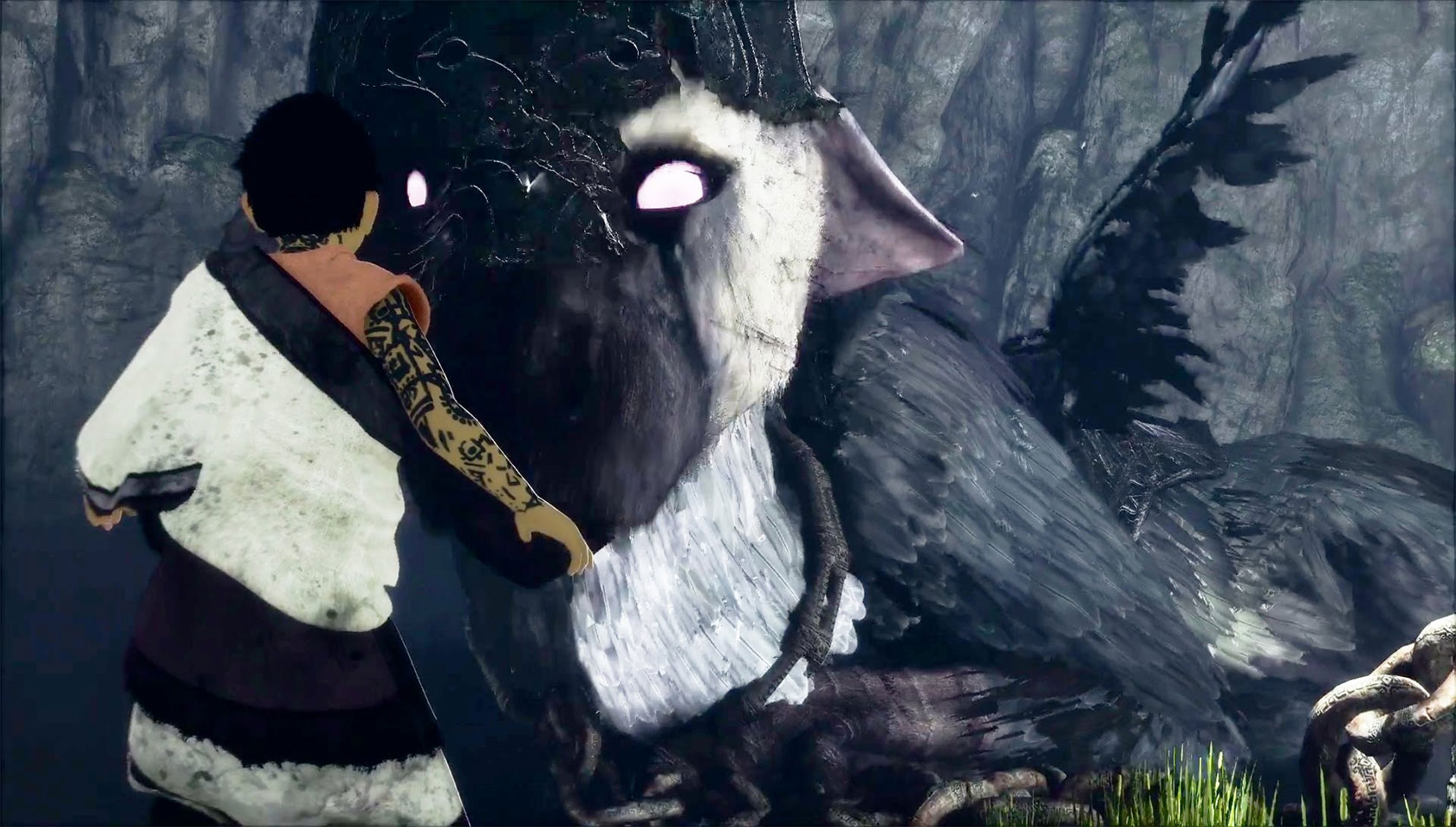 Honestly, you wake up to this staring at you and the first thing you think is “I’d better crawl up there and yank on those spears because I totally bet that won’t hurt AT ALL.” Jeez, kid.

In between Ico and The Last Guardian was the heartrending masterpiece Shadow of the Colossus, basically a game of crawling around on giant kitty-eagles, horse-bears, and giraffe-tigers and stabbing them until they die and then feeling super-bad about it.

At the heart of The Last Guardian is the relationship between Trico and the boy, and the actual gameplay is meant to be a sort of meditative exercise in having Trico around and getting him to help out with various environmental puzzles. Trico is so very incredibly realistic in his mannerisms and behavior that playing The Last Guardian becomes very much like owning a kitten: cats aren’t readily coerced into doing your bidding, but they will, provided they’re allowed to do so in their own time and on their own terms.

Ultimately the problem I had with this game was, I suspect, rooted in the time it took to make it. There’s a sense that Fumito Ueda wanted to get The Last Guardian exactly right, and in his drive to accomplish that he zoomed way past it, and spent years tinkering and polishing and inadvertently moving it ever-farther away from its ideal state. It feels, as I said above, over-engineered. 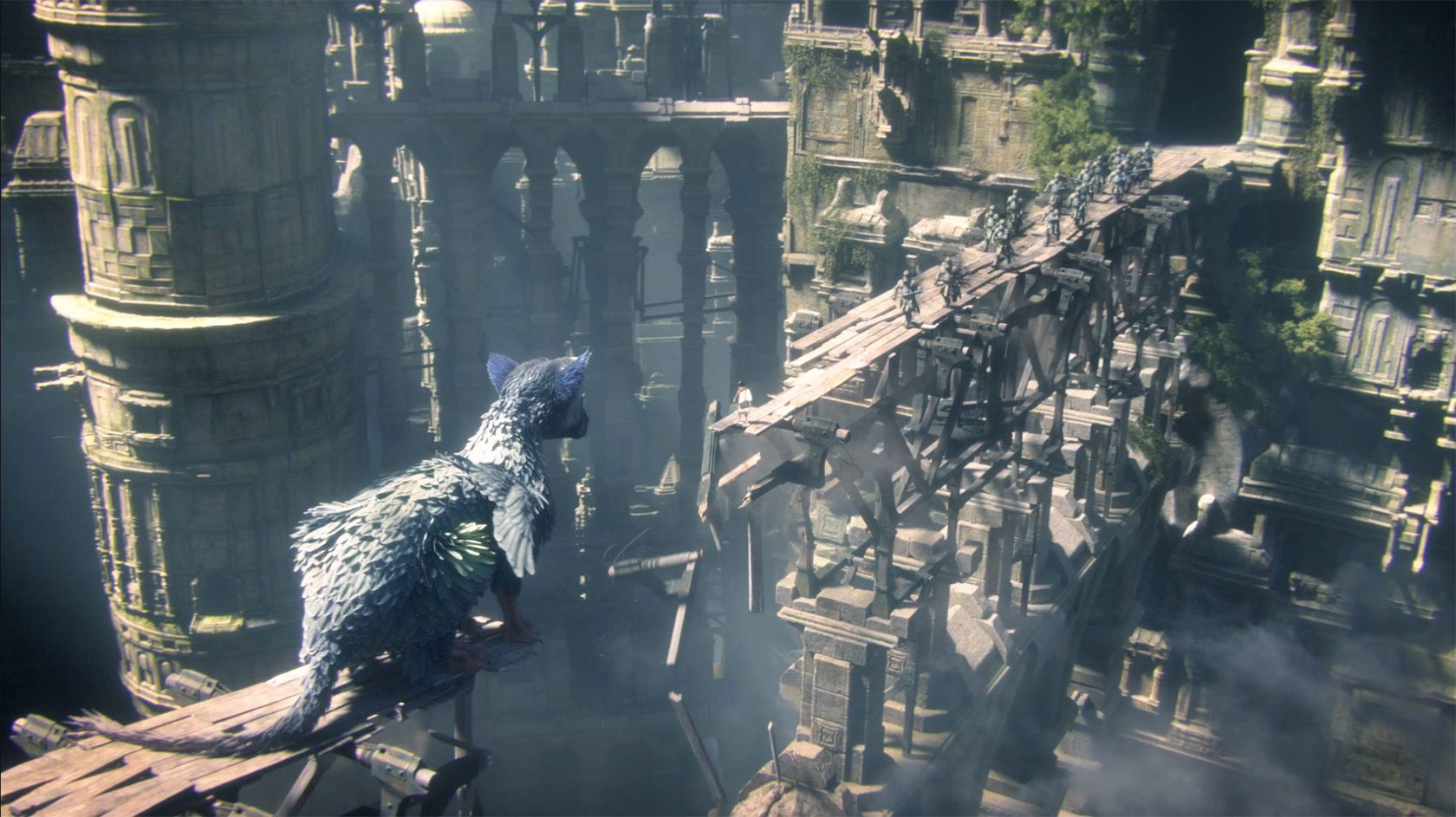 There’s also the troublesome fact that nothing about this game should have taken eight years. It looks good, but doesn’t come close to truly showcasing the PS4’s power. Trico’s animations are exquisite, but no more exquisite than Agro the horse from Shadow of the Colossus.

Some have argued that maybe his AI was the stumbling block, but I’m less sure. We penalize most games for not doing what we want them to; just because that’s the core mechanic of The Last Guardian doesn’t necessarily indicate the presence of advanced stubborn-ness routines. Maybe Trico’s artificial intelligence is incredibly feline — there are certainly times when it seems so — or maybe it just seems that way sometimes because it’s part of the experience.

It’s not that coaching Trico along gets boring. It gets frustrating at times, but the whole point of the game is to build a relationship with this animal. If he just did what you told him it might be momentarily less tedious, but it’d feel more artificial. 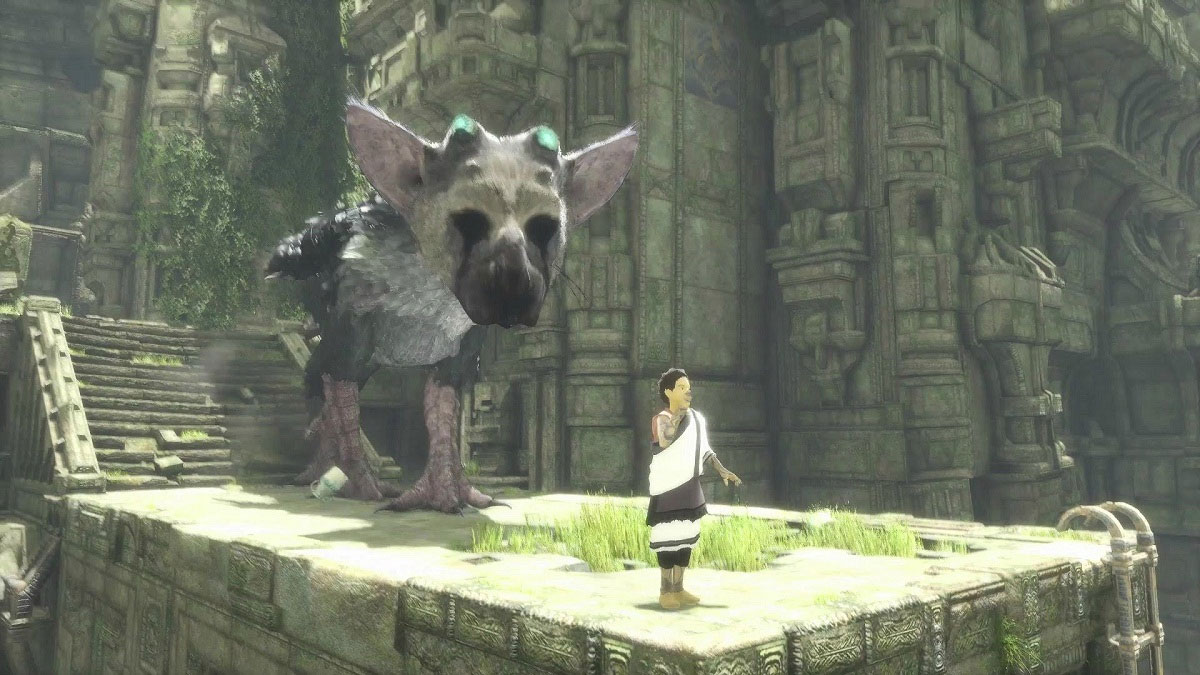 Instead, the game feels artificial while the boy/Trico relationship feels real. When I got Iris there was an adjustment period, as there is with any pet. I had to get used to the fact that she’s not going to stop licking my nose, she had to get used to the fact that no matter how much she meows she can’t have my Chipotle because Mexican food is bad for kitties. And over a few days we bonded, then over a few weeks we bonded more, then by a couple months we’d imprinted on each other and the fact that she sleeps in the sink is no longer weird to me.

That’s the end of the diversion. I honestly don’t even know what its point was.

ANYWAY, Ueda and Polfeldt had what sounds like a fascinating and wide-ranging conversation about the personal foibles of game design — things that aren’t usually discussed but are interesting all the same. I hope the whole thing goes up on YouTube at some point, because the GamesIndustry.biz article, while nicely comprehensive, isn’t a transcript.

Despite its vasty development, The Last Guardian is not thought to have cost a particularly large amount of money to make, which is likely why Sony didn’t pull the plug or crack the whip years ago. Plus there was the not-unreasonable hope that Ueda would do it yet again, that he and Team Ico would once more pull off a Ico/Shadow level product. In my opinion they did not, but that’s okay. What’s really gratifying is the fact that Fumito Ueda basically outright said he’s making another video game, and that can only mean good things. Even if it sucks it’s a good thing, and it’s unlikely to suck.

It’s an interesting pairing, Fumito Ueda and David Polfeldt. The iconoclast auteur and the director of a very mainstream, game-y studio. Massive gave us World in Conflict and — much more recently — Tom Clancy’s The Division, a game which despite its faults is outstanding when played as intended. Both of these dudes have real cred, but they’re fundamentally different in their perspective on the craft. It’s like Steven Spielberg sitting down with Andrei Tarkovsky. Both brilliant, but oil and water in terms of what they do, how they do it, and the way in which their work is consumed.

And also Tarkovsky is dead so it would be a difficult conversation, but you know what I mean.

One Response to Apparently It’s Not the Last One