EarthNight started out as a simple idea: a runner game with just two buttons, but a little bit of depth. This basic idea lead Philadelphia-based game developer Rich Siegel of CleaverSoft to a project that would take a lot longer than expected, but yield beautiful results. Now, EarthNight has been announced for the PlayStation 4, as well as targeting PC, PS Vita, iOS, Mac, and Android platforms. I got to see it at IndieCade East and try it out on PS4, as well as ask Siegel some questions about its development.

EarthNight is in fact not an “endless runner,” as the genre is commonly called. “This runner has an end,” Siegel assured me. But in my several attempts at the game, I didn’t have the skill yet to make it there. The gameplay is similar to most entries in the genre – the character you choose auto-runs, and you can control his or her jump and landing with a basic two-button system. It’s simple, but challenging, with some additional wrinkles in complexity. The level the character runs on is actually the body of a dragon floating in space. The object of the game is to collect items from the dragons which can be traded in for water when your character reaches Earth… if they make it there alive. There’s a multitude of different collectables to increase your score, and secret eggs and hidden goodies to find. Finding secrets will add a multiplier to your character’s weapon, which they can possibly use to kill the dragons themselves for a high score. Then, they’ll leap off into space to encounter their next foe in free-fall and start the process again.

The game stars two characters, Syndey and Stanley, and each has a unique flavor of jumps and attacks. Sydney attacks dragons with a powerful dragon spirit living in her fist, while Stanley uses a slightly more familiar-seeming sword attack. Siegel cites Shadow of the Colossus as one of his inspirations for this title, and it’s easy to see the influence when Stanley pulls back his sword for a killing blow on a colossal dragon. Siegel also cited Spelunky as an inspiration, for its approach to procedurally generated level elements.

Most of the people I saw who played the game at IndieCade favored Syndey, even though her mechanics, with a jump that changes angles depending on timing, are a little more challenging than Stanley’s. “She’s everyone’s favorite,” Siegel remarked. So how did Sydney come to be the star of the game? Syndey was designed by the game’s lead concept artist, Paul Davey, and is based on his younger sister. Though he’s a very prolific digital painter, Syndey was Davey’s first time doing any animations, but since he was making a tribute to his sister he was determined to get it right himself. He created 300 different frames of animation for the character, which are all digitally painted in detail to bring Sydney to life.

“Some people say, I could play this game on the Super Nintendo,” Siegel commented. But in fact, with all of the unique hand-painted graphics, lush animations, and tons of different objects on screen at once, not to mention the undulating dragons- “We’re pushing the limits of what even a PS4 can do.” The dragon levels are created with a 3D process, mapping hand-painted textures onto a digital model. They move at a sine wave, which Siegel calls “the most beautiful form of math.” Most creature animations in the game are done by animator Zach Cohen. The game’s chiptune soundtrack, by Paul Weinstien, is also pushing the hardware, Siegel says, in spite of its oldschool feel. 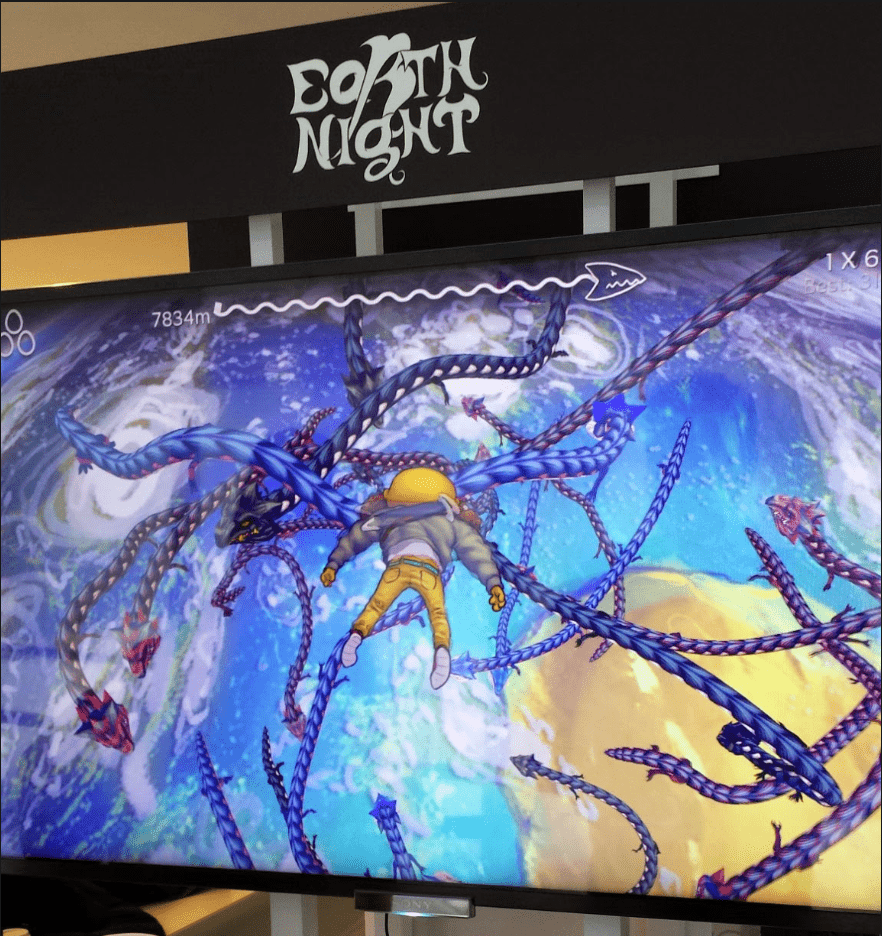 EarthNight on the PS4 at IndieCade East

You can meet the rest of the CleaverSoft crew on the studio home page. The official announced release date for EarthNight is “When it’s done,” but there’s a mailing list you can sign up for at EarthNightgame.com if you can’t wait for the announcement.

Thanks to Rich Siegel for talking to me about this game at IndieCade East! And for – full disclosure – giving me a cool EarthNight T-shirt when I killed my first dragon.

One Response to Local Flavor: CleaverSoft and EarthNight