I recently bought a new wireless router. The old one was dog-slow and really unreliable – a problem since I use my 360 for Netflix a lot. Or, rather, I would, had I been able to get a reasonable signal. Instead weeks would go by when Netflix wouldn’t work at all; the rest of the time it minimized the picture quality to just above intolerable. Through sheer laziness I’d put off the purchase for almost a year, but I wanted my Netflix. I don’t like sitting at a computer to watch stuff. And, since the Sci Fi Channel inexplicably quit carrying Doctor Who years ago, I was way behind in one of those guilty pleasure shows whose pure British zaniness make it a must-see in my book. 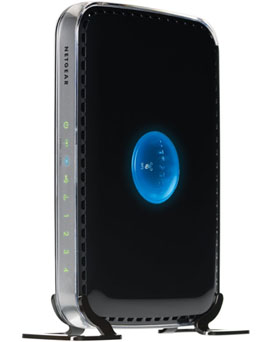 The new Netgear solved it all. This thing is fast. Once again unfettered Netflix access was mine, and I was finally able to catch up on Doctor Who.

This article has no relation at all to Doctor Who but since I’m sure you all want my opinion I’ll quickly render it:

Anyway, for reasons that will soon become apparent, you should know that I installed my new router on June 1. Since then, in addition to about 14 episodes of Doctor Who plus the Christmas specials where Tennant got replaced by Smith and also the inexplicable one with the balloon, I’ve watched Kick-Ass (missed it on release); Macbeth (Patrick Stewart in the title role; he was good but little else was); Sherlock (on recommendation from Ajax19); Dead Space Extraction (awful); Lost in La Mancha (heartbreaking); Water Wars (depressing); Left Behind (sue me, I was curious!); The Cove (I’ll never eat dolphin again); and Starship Troopers 3 (I get a little weird late at night).

I also downloaded Infamous to my PS3 as part of Sony’s apology for getting hacked; the final release of Frozen Synapse; and Visual Studio Express 2010. I HBO Go’d a few episodes of Game of Thrones even though I have most of them on my DVR. I did a few Skype calls, Steam performed its usual housekeeping and patching, and of course there was normal email and site management and web surfing and stuff. Out of curiosity I checked with Comcast to see how much my house has slurped down:

Our Mat C wrote recently that an all-digital future may be less desirable than we think, and I agree. Though an all-digital future is probably inevitable whether we want it or not, the world is not wholly ready for one. While services like Steam have changed the way I buy and play games, and services like Netflix streaming have changed the way I consume media, this has naturally changed something else: the amount of data I require. It’s only going to get worse. Streaming game services such as OnLive and Gaikai may be embryonic at the moment, but they or something like them will eventually have a large market share. Cloud apps like Dropbox and Mozy play host to whatever-comes-after-terabytes of global data.

Many major ISPs cap subscriber bandwidth, and Comcast’s 250GB ceiling is actually quite generous compared to some. Time Warner’s limit on the Roadrunner service is 40GB per month. Cox Communications limits users to 2GB per day. 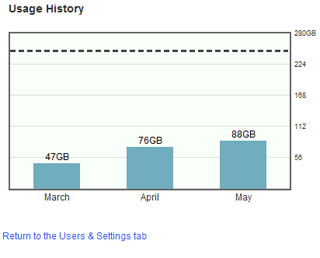 There is a vaguely plausible reason for this – ISPs are trying to prevent illegal file sharing, partly because it’s illegal and partly because it takes up bandwidth. Until recently, only users of BitTorrent would have that kind of traffic in a single month. Even I, with my shoddy SD signal from Netflix, would never gobble anything close to 250GB in a month no matter who much Doctor Who I watched. But full-on HD streaming has changed things dramatically. Comcast’s claim that only 0.01% of its users would ever be affected by the cap is simply no longer accurate. Streaming nearly everything I watch in high definition is going to gobble up more bandwidth – possibly more than I am allowed. And while I’ll be first to admit that June has been an unusually internetty month for me, it’s a little unnerving to be at 40% in ten days. I don’t use BitTorrent, I don’t share files.

I do, however, buy games on Steam – more and more of which weigh in at 8-20GB apiece. I do download large objects – S.T.A.L.K.E.R. Complete is a hefty gigabyte on its own. I do use my Dropbox for nearly everything, including my Outlook PST file, resulting in near-constant syncing between four PCs, two of which always use my Comcast account.

We’re in the in-between space now, where people are consuming exponentially greater amounts of data but the providers are still throttling access to it. It’s all made more murky by the fact that Comcast, Cox, Time-Warner, and other ISPs don’t actually own the pipelines they’re using to deliver data to your house. They rent bandwidth from the massive backbone providers, mostly companies you’ve never heard of: Level 3, LINX, Savvis – these are the outfits that own the physical aspect of the internet. And they too are threatened by the rising bandwidth consumption.

A time will come when 250GB a month is paltry. In 2008 a University of California study suggested that Americans consume 34GB of data per day across all media, non-digital and non-internet included:

At that rate you’d hit your Comcast cap in a week. As time goes by, those large slices of non-digital stuff are creeping more and more into the digital and streaming realm. Lots of people get Doctor Who through Netflix, and fewer watch it on TV. Print is going digital – books, newspapers, magazine. I’d bet that by 2015, 85% of the media I consume in a day will be streamed or downloaded. So much for 0.01% of Comcast users being affected.

The backbones and the ISPs alike need to get their heads around this. The amount of data we consume is never going to shrink, and caps are completely unrealistic solutions. Sure, Google or Verizon may bite the bullet and lay a new fiber backbone. It’d take probably ten years to wire North America and Western Europe, and cost… I don’t know, as much as a trillion dollars, I’d think. And then we’d be left with a new superfast internet… owned by Verizon. I think not.

The future is more likely wireless, which presents its own problems. The electromagnetic spectrum is large but finite, and right now technology only allows us to use a small portion of it for data transmission anyway. Our fat pipes no longer seem so fat.

Think about this as you fire up your Roku Player, or your 360, to catch up on Ugly Betty. Before you click another one of Steam’s damnable daily sales, ask yourself if the game you’re about to download is worth it. Oh sure, it’s worth the $2.99 they’re charging, but is it worth the 6GB of quota it’ll gobble?

I don’t know what happens if I exceed 250GB in June, and I’m kind of afraid to find out. Will the Comcast Police come and get me? Will I be taken away to Comcast Prison for a rough cornholing – a sort of lesson in how those pipes feel as they choke down my irresponsibly enormous data packets? Will they just shut me off? If Steerpike falls silent on, say, June 23, don’t assume he’s been hit by a bus. He may have simply fallen foul of the Data Overlords, whose ire we shall all soon court.

12 Responses to Filling the Pipes