Telltale’s second series this year to extend a classic sci-fi film is a dino-tranq-size shot of nostalgia for when sci-fi movies were still awesome.  Also, dilophosaurs.

Though Jurassic Park: The Game is separated into four episodes, as near as I can tell they have all released at once, which I doubt was the original intent, but hey, I’m not complaining; Telltale would have to make a pretty big misstep to prevent me from being in for the long haul in any case.  (This may not be true of the non-PC platforms, which include the 360, PS3, and iPad 2.)  Despite the fact that I could have just kept going into Episode 2 if I had wanted to, it felt slightly wrong to do so without at least a tiny break, so my impressions here are based on the 2-hour(ish) chunk of gameplay that is Episode 1: “The Intruder”.  And an interesting chunk it is.

Welcome (Back) to Jurassic Park

So it’s possible that some of you may remember a little movie called Jurassic Park that released back in 1993.  Even then, when I was in 1st grade and my parents wouldn’t let me see it in theaters (my mom thought the guy getting raptored off-screen in the opening scene was enough to draw that line), I adored Jurassic Park.  They didn’t lay off marketing it to us kids, of course, but over time I learned a whole bunch about the lore surrounding the ill-fated attraction on Isla Nublar (and, when the time came, Isla Sorna).  Because I’m obsessive like that.  I obsess.

For obvious reasons, Jurassic Park was wildly successful in its day.  Spielberg.  Animatronic dinosaurs that were simply incredible for the time.  The solid foundation of an excellent Michael Crichton novel.  Heck, dinosaurs sell; they just do.  But the movie was good; incredible good.  They-don’t-make-’em-like-that-anymore good. 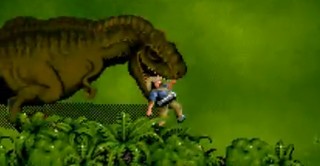 I did have a long, abusive relationship with the oddly Demons' Souls-like SNES release.

So, of course, Telltale’s latest is not the first video game the franchise has seen (though it’s been quite a while).  I’ve played relatively few of them, since, like most movie tie-ins, they were mostly probably crap.  So in their predecessors they have very little to live up to.  They could phone this in and still be the best Jurassic Park game ever, pretty much.  But that’s not how Telltale rolls.  They delay stuff a lot.  (The game sometimes borrows the film’s tagline about being 65 million years in the making; given the number of times the release date for this changed, that occasionally seems literal.)

But I digress.  Really, I don’t mind delays, and I know Telltale’s full of good people who do cool stuff.  Delays are better than releasing bad games.  Just kidding around with you.  Friendly ribbing, one designer to another.  (Hire me!)

Anyway, since I was abundantly impressed with how well Telltale captured the feel of the Back to the Future films in this year’s Back to the Future: The Game, I had high hopes for Jurassic Park: The Game.  And on that level, I was not disappointed.  They’ve served up the Jurassic Park I know and love, or rather, another glimpse of it.  And that is awesome.

But if you’re thinking about now “if you’ve played one Telltale game, you’ve played ’em all,” then stop right there, bub.  That’s not the case anymore.

But let me back up a minute.  In a nutshell, Jurassic Park: The Game tells a story that parallels the first film but features a different cast of characters (unless you count Dennis Nedry’s corpse, or, I suppose, the dilophosaur that ate him, or the park’s T-Rex…).  Despite this, Jurassic Park: The Movie is pretty much required reading here – if you’ve (somehow) never seen it but decide to play this game, you will be lost.  And if you do not know what I mean when I say that the plot explores the fate of that Barbasol can Nedry stole, you probably need to go re-watch it anyway. 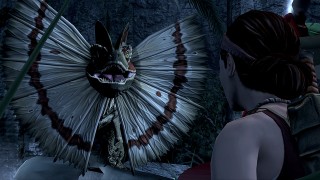 I respect a good frill when I see one.

Though the game looks reasonably Telltale-ish, it doesn’t play too much like that – at least, not mostly.  This isn’t a point-and-click inventory puzzle game.  It takes more cues from interactive dramas like Heavy Rain, or perhaps some of those action sections of Back to the Future: The Game.  So sometimes you’re seeing the characters from a fixed camera angle and clicking on icons indicating points or interest (and there are puzzles to solve, fear not), while other times – like, say, when a dinosaur is trying to eat you – it’s more about timing the proper button presses.  And while this may not compel you much, be aware that it is somewhat unforgiving; sometimes, the time you have to avoid being trampled by a T-Rex is dangerously short to hit all the proper buttons in the proper order.  Though this system took some time to get going here, by the end of the first episode it clearly helped in keeping up the tension in such scenes.

But this isn’t a game that’s going to challenge you in a meaningful way.  The challenge is really in “can-you-hit-these-buttons-good”, and it shouldn’t take you more than a try or two on any sequence.  The puzzles also aren’t too hard at all, though maybe later parts will be a bit better about that.  But maybe that’s not the point.  Where the occasional bit of Back to the Future: The Game felt contrived more to add gameplay befitting the genre, Jurassic Park: The Game feels trimmed to what makes Jurassic Park: The Game work.  It would just be cumbersome to be running through the jungle with an inventory full of…everything that wasn’t nailed down.

Though most of the film's cast is absent, Philosoraptor does make a cameo, reprising the role that made him a star.

And once you come to grips with this, the game is pretty cool.  The writing is solid as ever, and the cast – which you switch between as necessary – is likeable.  In this first episode, we have a mystery woman sent to recover the Barbasol can; one of the park’s veterinarians, stranded by the storm; and his teenage daughter, there for a visit.  Promotional materials and such seem to suggest that more characters will join up over time.  But even with a bunch of characters running around with you (more or less), the tedium of point-and-click adventuring is all but gone; dialogue is now on-demand, and there are very few times that something isn’t happening.  If this feels very linear, that’s because it is.  But it’s the good kind of linear that does this to serve the storytelling and then tries to serve up a story worth your while.

And for a JP junkie, that’s precisely what Telltale does: provides a story that fits into the fabric of the film (since the plot picks up one of the film’s loose ends and takes place surrounding it) while also expanding the story of Jurassic Park and Isla Nublar.  There are clearly secrets here that Dr. Grant and company did not encounter, including a highly venomous species of dinosaur that lurks in the shadows.  And it’s the kind of game that could arguably reach an audience as broad as the film itself did – less a game than an interactive cinematic experience, really.  We really need words for these things.

If I have any gripes it’s really in execution.  The Heavy Rain-like parts of the gameplay do sometimes commit the same sins that that title did, occasionally requiring button presses a little too often for mundane tasks.  Also, when there’s movement or something involved, like when Mystery Woman climbs up the muddy slope to Nedry’s wrecked Jeep, Jurassic Park has no animations for while you are hitting buttons (or not); where Heavy Rain sometimes had awkward moments when characters might reach for something and then apparently think better of it, Jurassic Park just pauses and waits.  This isn’t the case in the action scenes, which are sometimes brutally timed, but it is really…awkward.  This emerging genre still needs work, obviously.

The bottom line is that, if you are a Jurassic Park fan, you could have fun experiencing this title.  If you abhor the slightest hint of linearity, though, or just think the story doesn’t sound that compelling (or, though it pains me to say it, if you don’t like Jurassic Park), this isn’t going to offer you much.  For me, though, I can’t wait to see what happens next.

E-mail the author of this article at dix@tap-repeatedly.com.  But please remember to say the magic word.