With all the polished games I’ve managed to snag lately, last night I lost an evening to an unfinished alpha. Prison Architect, by Introversion Software, was released to early testers this week. Introversion is selling access to the alpha under a tiered “pay what you like” system (as long as what you like is at least $30). And thusfar, it seems to be doing quite well for an unfinished game. 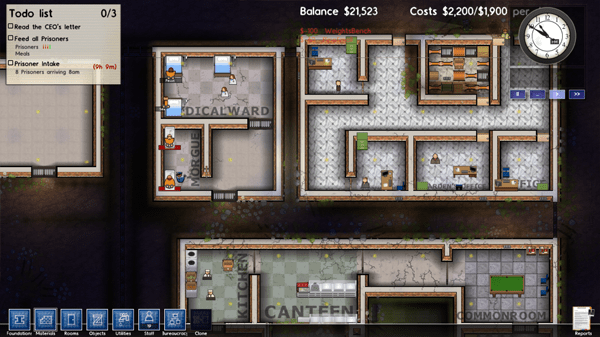 Thirty bucks did seem like a steep price for a buggy game, but, I’m a sucker for really intricate management sims. I play Dwarf Fortress. And Prison Architect looked a lot like a more graphical version of Dwarf Fortress. The premise is a little different, of course: instead of creating a fort for dwarfs, you create a fort for prisoners. The object is to keep them happy, healthy, and locked up for as long as you can until it all inevitably goes wrong.

Everything about Prison Architect is still very much an alpha. The UI is a bit unresponsive at times. There’s a tutorial, but it cuts off abruptly and doesn’t explain everything you really need to do well in sandbox mode. And there are bugs, oh yes. Twice I loaded up a saved prison just to discover the canteen was on fire. I know I didn’t leave it that way. On the other hand, my newest prison is peaceful and quiet, but only because the state apparently stopped sending new prisoners to it. When the truck full of prisoners shows up every morning, it just drives on by and doesn’t stop. They must be on their way to the burning prison down the street. 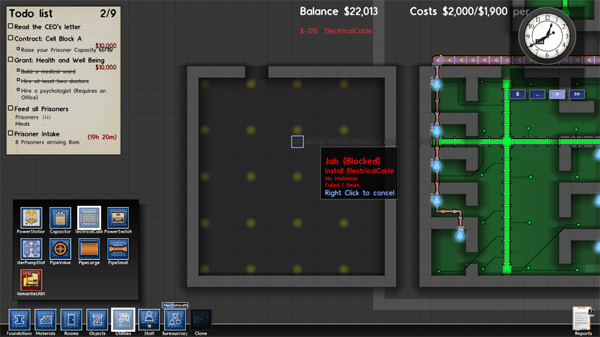 The game also isn’t incredibly deep yet. Once I got the hang of building a stable prison, the only thing to really worry about was maintenance and upkeep. The lack of three-dimensional building means that the ultimate size of the prison complex is limited a lot, but maybe second stories will be added eventually.

I think after putting in a solid evening, I’m done with the game until it updates. I’ve done everything there is to do. This game will likely be great when it’s finished, but it’s not finished yet, which is a good thing to keep in mind before plunking down your dollars. Introversion is quite up-front about that, though, so if you’re a simulation games fan, keep an eye on this one. Despite its alpha status, there’s definitely a reason I was able to play it for hours. It’s likely to be truly entertaining once it all comes together, and I’m sure I’ll be tossing in a few evenings more.