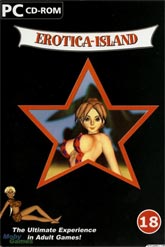 “This game has no redeeming value, social or otherwise. What’s worse, production values are practically nonexistent. It’s not sexy or even funny, it’s merely limp. I wouldn’t even go so far as to call it a crapsterpiece—it’s just crap.”

Erotica Island is an X-rated game and this review is probably going to turn out X-rated too, or at least NC-17. If you are easily offended by sex topics and/or dirty words, please! stop here! I don’t want any hate mail from people who are upset by the subject matter and/or language in this review. 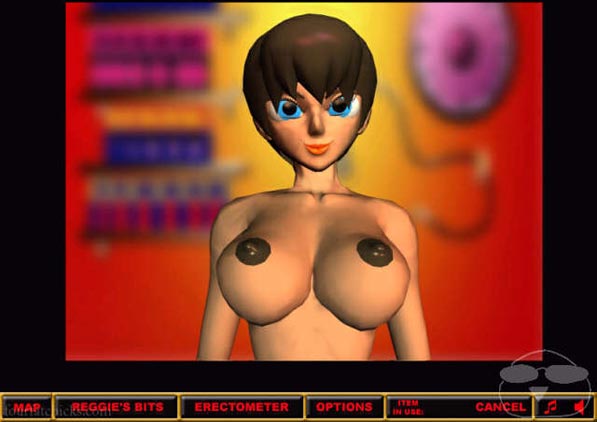 Is it Really an Adventure Game?

Yes, in that you have to solve puzzles and use inventory items in order to progress. You play as Reggie Rich, who has genitals the size of a gerbil’s, according to the narrator. As the game opens, Reggie is on his yacht, drinking a daiquiri (or something) as he enjoys a blow job. He gets a phone call and must leave the yacht to tend to business. He boards his helicopter and flies off, only to crash land on … you guessed it, Erotica Island.

Turns out there’s only one boat on the whole island, which is owned by one Randy Muffin, a studly black dude with a gigantic ‘fro. Said Mr. Muffin will take you back to your yacht for the negligible sum of $10,000 … but he will reduce his fee to a mere $100 if you can manage to bed the seven most beautiful women on the island. Well, even though you’re wealthy, all your money is either now in the drink or back on your yacht (not specified … why bother with minor plot details, right?), so of course you feel compelled to set out on your sexcapade. 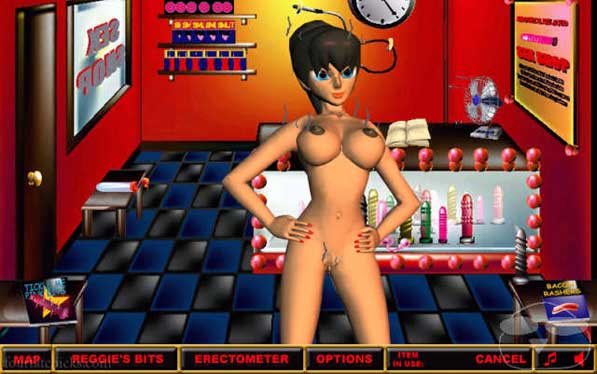 However, I am not a man. Or even a lesbian. I have trouble believing that many men would find this game arousing. But you never know. I have heard rumors regarding the true location of men’s brains, and it ain’t in their heads baby! Or at least not their big heads.

Judging from the Japanime-style faces of the females, I believe Erotica Island to be based on the Japanese Hentai/Manga style of sexual comics and animation. However, from what little I’ve seen, the artists of those cartoons tend to employ some care and attention to detail in every aspect of rendering a woman’s body, not just the ol’ mammaries. 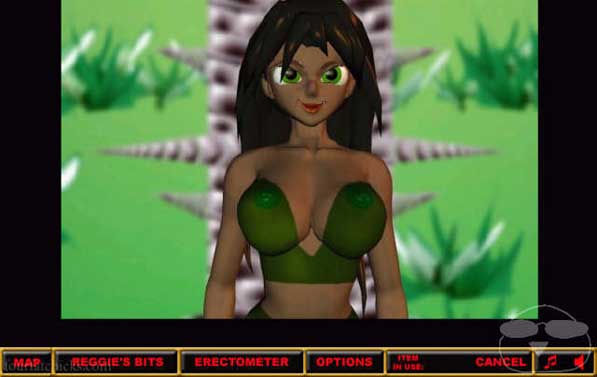 Note the face there. The time spent, you know, on the face. Not the mammaries. Face.

The same character model is used for all seven babes. Minor changes are made to each, such as hairdo, nipple color, and the pattern on the thin veneer of clothing that is very sloppily slathered on just so’s they have something to take off. I did think it was nice how the shiny hair color always matched the shiny nipple color. Kudos to the designers for that little detail!

The nipples are ridiculous. Aside from the aforementioned shininess, they sit atop the women’s boobs like pepperoni on a pizza, instead of on the front like in the real world. Or the bottom, in some cases. Not naming any names or anything.

… But Not a Single Purple-Helmet Warrior

Nary a one. Even though there are two naked guys in the game, Randy Muffin and Reggie himself, you never once see a penis. Plenty of sex with plenty of penetration of plenty of female orifices, but the penis is merely suggested. By the location of the woman’s mouth and the endless slurping noises.

You know, this whole game smacks of homemade. The graphics are crappy, and the interface is straight out of the early 90s, except the game is point-and-lick, oops, click, instead of verb-controlled. The whole thing actually works okay, but it’s slow, quirky, and cumbersome.

Your menu is at the bottom of the screen at all times. Your choices are map (which is the only way to move from location to location), Reggie’s Bits (inventory), Erectometer (penis size gauge—you have to fill it up before the island’s überbabe will let you fuck her), Options (save, load, quit), the Item in Use (you have to choose something out of inventory and have it appear here, and then use it on something; you have to click cancel to get rid of it), and a music/sound on/off button.

Inside the inventory screen, you get another menu. Sometimes you have to combine one or more items, and this is done by choosing the first item, clicking the “combine” choice, then choosing the next item. 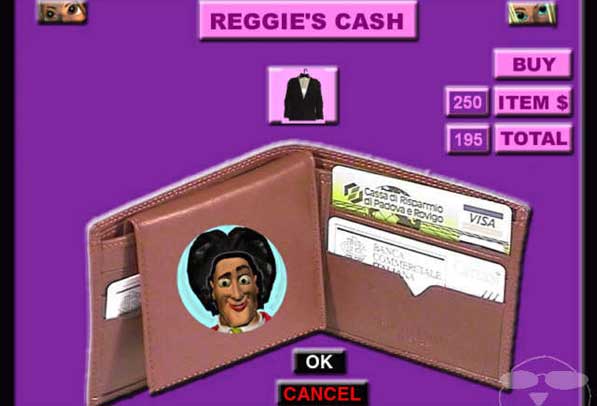 Most of the sound effects are really lame. Each time you meet one of the babes for the first time, you get a siren noise and a stupid “Babe Alert” screen. Sound effects are repetitive—lots of oohs, ahs, and sloppy spit noises from babes gnawing on Reggie’s pud with their mouths open. Where are their manners, I ask you? My mommy always told me to chew with my mouth closed. Same slurpy sounds for just about every sex scene, too, except for one where the woman says “oh God” quite a few times. The music is 100% annoying. But at least it didn’t get stuck in my head.

Reward or Punishment? You Be the Judge

Every time you do something big in the game, you get a fuck scene, sans tool but rubbery boobs abounding. (Sorry for the pun.) There is a theater where you can go to replay these a zillion times, or maybe none in my case. Well, really, I did replay one but I didn’t know what the “Reggie’s Reels” button did until I clicked it. 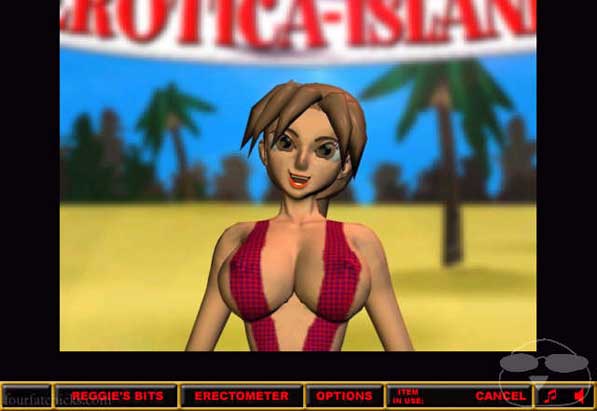 Look! Boobs! They're not new boobs, but boobs they are. Appreciate them.

This game has no redeeming value, social or otherwise. What’s worse, production values are practically nonexistent. It’s not sexy or even funny, it’s merely limp. I wouldn’t even go so far as to call it a crapsterpiece—it’s just crap.

Erotica Island cost me a perfectly good $40 plus shipping from the U.K., and I never even opened the little Emergency Tissue pack. What a rip! There are good bad games and bad bad games, and Erotica Island is the nadir of the latter. All I got out of the deal was the dubious pleasure of sharing some guy’s booby wet dream.

Email the author of this review at jen@tap-repeatedly.com.