I’m continuing with my series of visiting local indie developers around Pennsylvania and the East Coast! This trip took me just outside of Philadelphia, to Woodbury, New Jersey, where I visited with indie development house Island Officials. Island Officials makes mobile experiences: from Android, iOS, and Windows Phone to the DS and 3DS. They also create analog games, working in the back rooms of the Tiki Tiki Board Games shop. In their business, they make new games, and sell old ones too.

While I was visiting, I checked out some of their newest mobile app store offerings, and asked CEO Ryan Morrison a few questions about the Island Officials brand of game development. More info after the jump:

AJ: Tell us a bit about your studio, your focus, and your story. How did you get your start?

Morrison: From the beginning our focus has been on creating quality game experiences that everyone could enjoy. That was no less true when the company was just an idea I had in my basement with a couple of friends. We were very lucky to live near both a growing development community with talented individuals we could bring in as well as a publisher who believed in our first product, Hands On! Tangrams, as much as we did. Once the game released, we carefully followed the market to find where we could bring the best experiences to even more users, which lead to our expansion into the mobile and analog markets.

AJ: Where did the name Island Officials come from?

Morrison: The name started as an inside joke between me and the original founders of the company. Eventually we realized the name not only rolled off the tongue but also helped give our company a memorable theme. 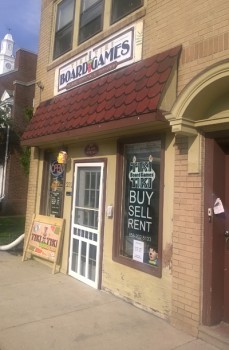 AJ: Your studio setup is really interesting with the retail in the front. How did Tiki Tiki Board Games come about and how does that work out as a secondary business?

Morrison: At one point Island Officials began to grow beyond the office space we had, so we went looking for somewhere else that would fit our current size. Of all the spaces we looked, our current location in Woodbury made the most sense, however the shop itself was considered a storefront. Many of us already had extensive experience working in retail, and already knew that interest in analog gaming had started to come back around. It ended up working out because it was both something our company was passionate about and also took advantage of a great opportunity.

AJ: Can you talk about the synergy between board games and video games? Is there a big passion for board games on the team? For example you have Pixel Lincoln, which is a deckbuilding game (with a video game feel).

Morrison: Pixel Lincoln was originally a smaller card game designed by our Analog head Jay Tagmire where the players would build levels and move around them using a penny. After he joined on with us, he reworked and modernized many of the concepts and themes from the original into a deck-building game that maintains the retro video game aesthetic. Once we had a working prototype, we demoed an advance prototype at a convention where Game Salute saw the game and approached us about assisting with the game’s release. With their help we launched a successful Kickstarter game where we raised 50,000 dollars for the base game and multiple expansions. Since then we’ve ran a successful Kickstarter for another expansion for the game, and it’s been one of our most popular properties to date!

One thing we try to keep in mind when developing new ideas is to keep the core mechanics simple and engaging so that they can be expanded on in many different ways. Sometimes we develop something in mind for a digital game, but can develop it into a solid analog game when stripped down to it’s core, while other times we look for ways to translate our analog games into an engaging experience digitally as well. Even in the early days of the company, many of our ideas for digital games began as paper prototypes before we began building them for phone or handheld devices, so many of them work naturally well as board games. The important thing for us to keep in mind is that though they engage in different ways, digital and analog games are games all the same.

AJ: Any other non-digital games you’re working on right now?

Morrison: We have a couple of analog games in our queue, including Pig Pen, a family-friendly game about wrangling pigs, and Famous Missions, a casual party game, both born from our awesome fans through Kickstarter. We also have Project Starcade in development that we’ll be divulging information about shortly. 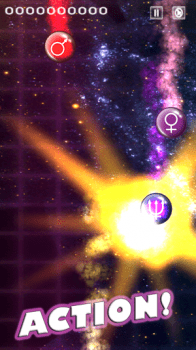 AJ: I want to ask about the music in Queen of Space. How was it created? What has it been like trying to localize it?

Morrison: The music was provided by Wayne Strange, whose worked on many notable projects such as the Zelda Reorchestrated project and AAA productions such as Star Trek and God of War: Ascension. We’ve been friends with Wayne for many years now and knew be able to make a stand out track that fit the unique feel of the game.

Localization for the game was handled by a third party. We had some interesting challenges, such as assets which had to be reworked to fit all the different unique languages the game had to be localized for. We also got a chance to see how the low barrier of entry for the game would be received by an international market; after localization, some of the professionals we had hired to help localize the game told us they had gotten addicted to it, so that was a very exciting and unexpected outcome.

AJ: Did it take more than one iteration to get Super Obnoxious Ball looking/sounding so precisely gross and disturbing or did that happen in the first take?

Morrison: The sound designer on Super Obnoxious Ball, Mony Houser, is not only good, but also very thorough in his work. We gave him a description for the kinds of sounds we wanted to have and he gave us three different iterations for them to choose from right out the gate. It turned out to be a difficult choice as they were all awesomely cringe inducing, so he didn’t have to go back and redo any he had given us.

AJ: Which game are you most proud of/why?

Morrison: It’s hard to pick just one! When you put the heart and soul of each team member into every project, each one is its own personal journey we wouldn’t give up for the world.

Morrison: Right now we have several exciting projects on the docket! Right now it’s still early to talk about any of them in detail but we can’t wait to share more about them when the time comes! 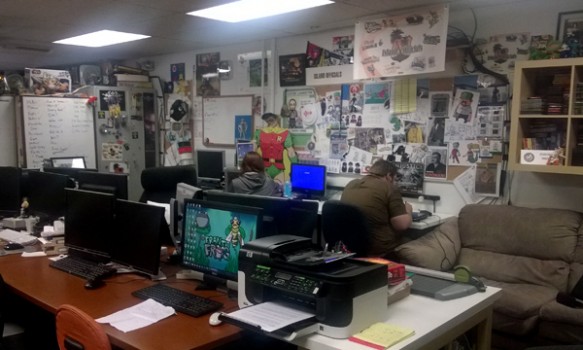 Thanks to Ryan Morrison for his great responses, and to everyone at Island Officials for letting me drop by and check out the studio! Learn more about their work and get links to download games at Islandofficials.com.