I knew I really wanted the new Shadowgate remake, but I also knew going in that it was going to be a really tough game to review. I still felt like I was the right person for the task in spite of the challenge. It takes a certain flavor of masochism to enjoy classic adventure games of this stripe: try-and-die games where even seemingly logical actions can lead to hilariously abrupt ends. But I’m no stranger to cruel adventure classics, and so I sallied forward to adventure. 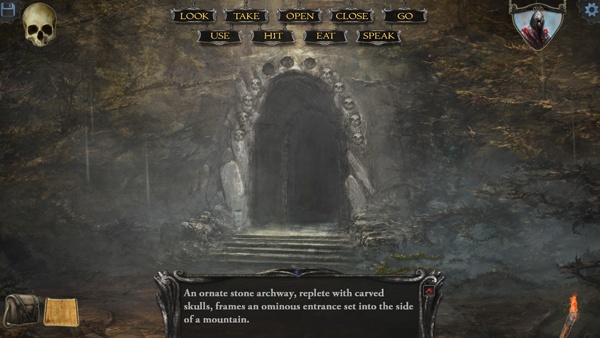 I thought that new-Shadowgate would just be old Shadowgate, prettied up, and that I’d make short work of it by simply playing off of my somewhat-hazy remembrance of the solutions to the NES version of the 1980s. But New Shadowgate is actually kind of different, with some solutions similar, but almost everything requiring some additional steps.

This new Shadowgate has three difficulty levels: Apprentice, Journeyman, and Master. I was assured by the in-game text that the hardest difficulty level was the most like the original, so that’s the level that I chose to start out with. I beat up against it for a while to discover that some things I thought I remembered one way were very different now. Sometimes, this was just to be clever and subvert my expectations of the game I thought I memorized. Other times, this was just because the UI and inventory were being fiddly, which is less fun.

Eventually, I tried the game on the easiest difficulty, partially to do due diligence as a reviewer and understand the differences, and partially because the Master difficulty was kicking my butt. I still got stuck a few times even at easiest difficulty, because that is the sort of game that Shadowgate is. It is a game where you might wander around for an hour, not realizing that you missed a clue in one room clear on the other side of the map. It is not a game that promotes a flow state.

I save scummed a lot while playing, so my in-game playtime and Steam playtime are really different from each other. Optimization of puzzle-solving and turn usage is actually important. As in the original Shadowgate, there are a limited amount of torches in the game, and it’s possible to use up every torch and run out of light. It is possible to lock Shadowgate into an unwinnable state, though you’d probably have to be pretty wasteful with the torches to do so.

I wasn’t sure I liked the graphics too much at first, because I was used to the more primitive renderings of the original. But they really did grow on me, communicating the appropriate sense of dread. With only a few exceptions I found most of the graphics to be “readable” and it was clear what could and couldn’t be clicked on in the room. There were, however, a couple of times where perhaps it wasn’t clear that something could be interacted with when it could.

The remixed music, meanwhile, is pretty fantastic, and can be listened to in new remix or classic retro varieties. I actually liked the new arrangements a lot, but playing the game with an all-retro setup is pretty fun too. Voice acting, when present, is solid (I think it’s just one person doing every wizard voice, but he sells it well enough). 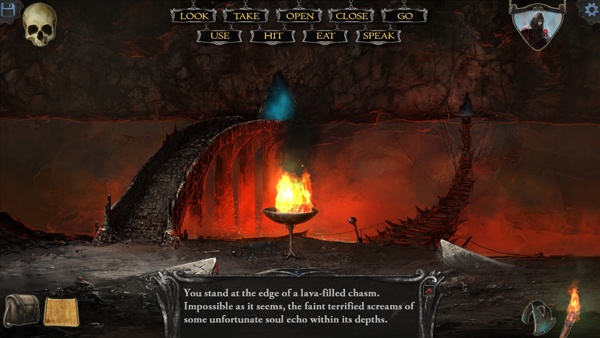 The game has added a lot more story now, with a long opening cutscene, an extended ending, and several other cutscenes at juncture points throughout. There’s a magic to especially the first of these, as it makes the game feel like a Proper Adventure. I would be honored to run it as a D&D game, though I might throw in an extra goblin attack or two to for some texture. But the lore in the game does work best when it’s hinting at a greater world beyond, and, bogs down when it goes into too much detail. For example, a circle of wizards is discussed, mostly from all of these wizards leaving really on-the-nose notes to each other about a danger lurking in this place or that. I really didn’t care. I assumed that whenever I found a wizard’s skull, it belonged to one of these journal-writing guys, but I didn’t feel any sense of reward in trying to figure out which dire-portent journal belonged to which rune-inscribed skull. The game frankly should’ve just cut out the clutter here.

The game now has an in-game hint system, in the form of a talking skull carried around outside the player’s inventory. The game likes skulls a lot. Like most of these systems, this thing is helpful sometimes. Other times, it tells you what to do, but not how, when how is the piece that you’re missing. That seems to be about par for the course with in-game hint helpers. The skull (its name is Yorrick) also occasionally cracks wise. This also seems to be a somewhat standard thing in hint systems, though Yorrick never really becomes an actual character like Crispin in Primordia did. Most of Yorrick’s jokes are fine, though: they hit lightly and tease at pop-culture without being cringeworthy. There’s multiple references to the Dead Ale Wives in new Shadowgate! As there damn well ought to be, considering. 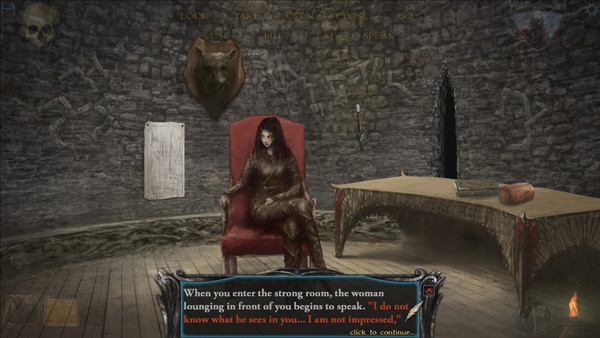 To really illustrate what’s different about this Shadowgate‘s approach compared to the original, I’m going to go in-depth about a particular puzzle in the game. I would say it happens about midway through, though it depends a bit on which order you hit things.

In the original Shadowgate, there is a female werewolf. She’s encountered at the top of a tower, chained to a wall in a disheveled dress. The original segment in question is at the bottom of this page in this LP. While the game describes the woman as beautiful, which might urge one to try to rescue her, this is wrong as she will then turn into a wolf, which is game over. The solution to this puzzle is to shoot the woman with a silver arrow. Because releasing her is death, in the original, you do need to do this while she’s still chained.

In the new Shadowgate, the same problem happens in roughly the same place, but instead of being chained to a wall, the female werewolf is just in this room sitting in a chair. Instead of wearing a flimsy gown, she is wearing Reasonable Armor. She seems to be waiting in here for the player-character to arrive, and then she goes into some detail about how she is the leader of the evil wizard’s army and etc. etc. Then she stands up, transforms into a wolf, and gives the player a round of action in which to perform the correct solution (which is still to shoot her with a silver arrow).

So I guess I can see why they changed this. In the original, there’s not really a strong leap of logic that would indicate the solution until one tried to rescue the girl, and died trying. So the actual situation seems a little cruel. But it is clever, a subversion of the Damsel in Distress trope that’s otherwise so common in games. It also makes a little more sense: either the werewolf lady was deliberately trying to fool someone by pretending to be helpless, or, more likely, the wizard actually did chain her in the tower to guard the key item that’s with her and/or prevent her from causing more trouble. In the new version, she’s just kind of sitting around, and sorry, but that is pretty dull.

What I’m saying with all this is that in giving the game more story, they made it more cohesive, but kind of sucked some of the fun out of it at the same time. The lore additions make the game feel like Shadowgate is part of a much larger world, but they don’t really do anything that feels fresh. I am very torn on the new lore. I’d love to ask the developers if some of the changes were specifically updated to feel modern, or if they would give more of a George Lucas “that was our vision all along, but technology needed to catch up” sort of response. 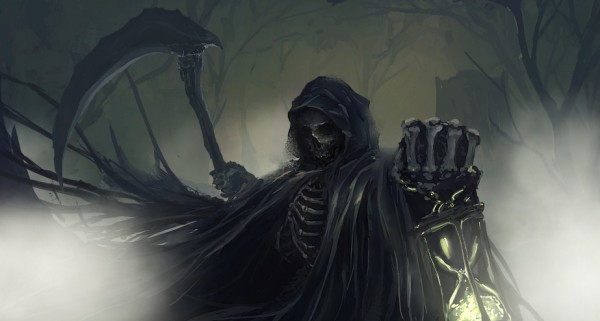 There’s an episode of the cartoon Freakazoid – you can apparently buy this now on YouTube if you’ve never seen it – where the titular hero is sucked into the internet and forced to play a video game to fight for his life. Given what most television writers seemed to think video games were, I was a little surprised when the game in question turned out not to be a jumping thing or a shooting thing, but a spooky weird castle where Freakazoid had to wander the halls solving arbitrary riddles and picking up armloads of seemingly random items. I remember thinking: is this Shadowgate? A hero in a cartoon got sucked into a video game to fend for his life, and that game is fucking Shadowgate? It was the perfect, tickling level of geek understanding, a joke that while it still referenced a classic, seemed delightfully obscure. At one point in the sequence, Freakazoid finds a bowl; he picks up the bowl, and cheerfully declares: “I got a bowl! Good for me!”

What I’m saying here is that at some point in new-Shadowgate you find a bowl, and that bowl is an object you need, and that moment seemed like the payoff for a joke that took twenty years to make and only happened in my head.

So now it’s down to the “is this game a good game or is this game not a good game” part. But that entirely depends on whether you want to play the kind of game that Shadowgate is. This has been a big year for nostalgia and most every game I’ve reviewed so far in 2014 has been some sort of a throwback. But other than being a member of the cruel killer point-and-click genre, which is inherently retro, I would say this Shadowgate is thoroughly modern in most other ways. What I came into this wanting to be able to say about Shadowgate is: It Is Shadowgate. What I actually really have to say is, “It’s Shadowgate, but it’s Shadowgate made in 2014.” And every change that that implies.

I wrote a review! Good for me!

One Response to Review: Shadowgate (2014)