Shovel Knight is a game where you, as the titular Knight, can smack the crap out of Reize Seatlan using a shovel.

After learning of this fact I picked up the game immediately. Sure, the Gamasutra writeup that explained how the game carefully mimicked, while not exactly duplicating, original NES limitations was a factor. And reviews across the board have been really good. But the thing that made me open up that Steam window was the selling point “beat up Reize Seatlan with a shovel.”

See, I know the guy who paid money on the Kickstarter reward tier to design his own wandering boss in the game. A few people paid in at this tier, so Shovel Knight has a few wandering bosses, with various looks, personalities, and scenarios. The Baz, for example, is a big bad attitude dude. Mr. Hat wears a very fancy hat. Reize is a quick-leaping chipper upbeat shonen anime protagonist. You’ll be sad when his boss fight is over, because you’ll want to slap him with the shovel again.

We’ve officially entered the Kickstarted era, where we’re going to start seeing some of the products that many of us have already paid for in the previous years. Some of these games have been delayed, coming back to the well for another round of funding, and that’s a lot of what people talk about. Some of the games are still in production. Some have been cancelled and disappointed the backers. But some shipped right out and delivered what expected. Like so. 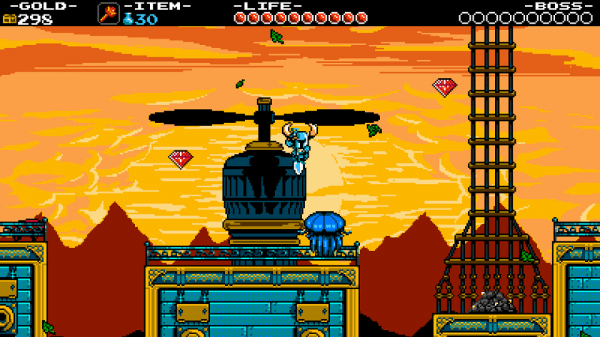 Kickstarter is giving us gamers the games we say we want. In a lot of cases, the games we want are games like the games we played as a child, except prettied up a lot, and mainly not quite as hard. Hey, let’s get this out of the way: Shovel Knight is not super duper hard. It’s hard enough, but it’s not “Nintendo Hard.” This has otherwise been described as the game being “generous.” Maybe that’s a dealbreaker for you, because you’re good at video games. If so, you can avail yourself of the many optional ways to make the game harder, such as destroying the generously placed level checkpoints, ignoring the system that allows a player to get free health and invincibility potions, or not collecting any of the magical artefacts in the game to get the Achievement for a pure shovel-only run. For the rest of us, who are kind of secretly bad at video games, or who are just older now and don’t have the reflexes – who maybe never got past the damn air fleet level in Mario 3 without the use of a P-Wing – finishing Shovel Knight is still achievable. That is clearly on purpose. If you are like me, you’ll hit some rough patches, but you won’t reach controller-breaking frustration before you memorize the more difficult stage segments and feel that little surge of triumph.

Shovel Knight is partly a game of Spot the Inspiration: here is the map from Mario 3, but also the weird horizontal towns from Zelda 2, the pogo attack from DuckTales and the themed boss levels from Mega Man… (stop me if you’ve heard this before, in every other review, because many of us aging gamers are eager to talk about the games we remember fondly, and I too am guilty). The clues NPCs give are nowhere near as cryptic as the old days, since they aren’t butting up against text limits and translation issues, and the signposting never falters. The levels are quite workmanlike and use all the old familiar things: the disappearing blocks, the spikes on the ceiling underwater, the enemies that you have to jump on to get to a higher spot, a Castlevania-style roast chicken hidden in a space behind a wall. Or, colloquially, “wall meat.” 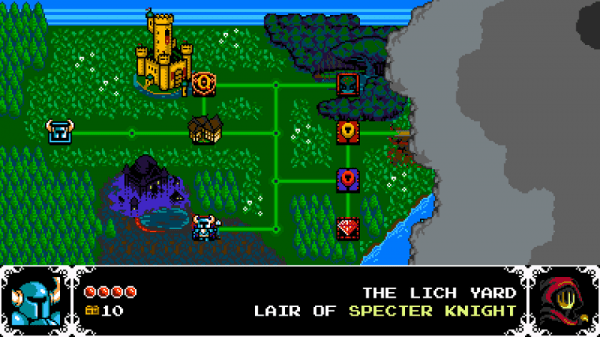 Some have asked “will I still enjoy the game if I don’t share the nostalgia for all these things?” and, I think so. I can’t say for sure if that’s true, but it is a pretty good basic indie platformer with lots of fun things to do in it and some clever levels and bosses. It lacks a certain… mystery, compared to older games, but that’s pretty difficult (though not impossible) to balance well with a tightly crafted experience. The alternative would be a game that players need a guide to complete, and Shovel Knight is more of a self-guided experience. If you will permit the metaphor, it’s less like going out to the wild frontier and more like going to Frontierland. All that aside, I liked Shovel Knight a lot. It has solid controls and action. It has a bit of a sweet little story and a GamePlus mode if you want to experience that again.

I’m interested to see what the future is going to bring other Kickstarted projects. Will games not fueled by nostalgia do as well? Are there many well-funded game projects that aren’t? Whatever the case, smacking around someone’s higher level-reward tier is a strangely unique satisfaction. However one feels about NES-talgia, the Kickstarter integration on the game is commendable. And I’m not just saying that because I know a guy.

June Is: Honeymoons and Game Shows