From the beginning, The Wolf Among Us struck me as easier to recommend than The Walking Dead, functionally its nearest counterpart, because it isn’t so relentlessly bleak.  With the first season now concluded, I think it may just be Telltale’s best season to date.

If there is an independent comic that can compete for general dominance with The Walking Dead, it’s Bill Willingham’s Fables.  A few years ago, before Once Upon a Time and Grimm both moved in on the territory at once, Fables was being considered for television.  That never quite happened, obviously, perhaps because it was still a little before shows based on comics had really gained traction.  So it’s a bit of a thrill to see the world of Fables brought to life in another medium, and who better than Telltale to do it?

It can be easy to forget the existence of The Wolf Among Us amongst the continued adoration for the second season of The Walking Dead and the upcoming hype for Tales from the Borderlands.  Some of that, perhaps, is that episodic games present the games press (and, I suppose, marketing) with a tricky proposition.  Some sites review every episode as they come.  Some don’t.  As the Tap’s resident Telltale devotee, I chose not to crank out a review for every episode, partially because it feels like overkill, but mostly because it feels like reviewing a book chapter by chapter.  (Oddly, I am totally fine with reviewing comic books issue by issue, which I’ve been known to do, but I never claimed to be logically consistent.)

But with the final episode of the first season of The Wolf Among Us, “Cry Wolf”, out this week, we can look back on the whole story, complete – and, more than The Walking Dead, this is a story that works best as a whole.  Like the comic series itself, The Wolf Among Us is fantasy noir.  The premise, from the comic series, is that the Fables – characters and creatures from fairy tales, nursery rhymes, and the like – had to flee their otherworldly home to take refuge in our own world, specifically New York, where they live mostly in an area of the city they clandestinely call Fabletown, using magic to appear normal.  Fables who cannot (or will not) disguise themselves as humans get sent to the Farm, a place out in the countryside where there are fewer prying eyes.  Fable society is starkly separated into the haves and have-nots; some Fables lost everything when they fled the Homeland.  Some simply don’t have the good fortune of looking very human.

Bigby Wolf is Fabletown’s sheriff, so when the head of a murdered Fable turns up on the front porch of the apartment building, it’s Bigby’s job to get to the bottom of it.  Telltale’s style certainly begs to be used for a mystery with plenty of twists, turns, suspicions and suspects, and The Wolf Among Us delivers on that.  Other Fables see Bigby as little more than the lapdog of an ineffectual government, and cooperation is rare.  Frequently at least carrying one of his favorite Huff-n-Puffs, he’s more the hard-bitten private detective than the badge-wielding procedural policeman. 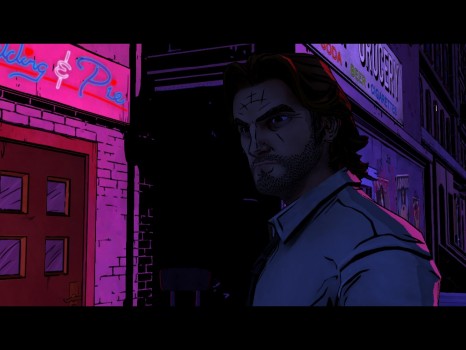 As a prequel to the comic, fans old and new can enjoy Bigby’s adventure.

The Wolf Among Us borrows The Walking Dead‘s gameplay, lightweight point-and-click adventure mixed with QTEs and dialog trees, plus several important decision points per episode that have ramifications as far as the very last episode of the season.  In some ways, this feels more effective than The Walking Dead, because so often Lee and Clementine are choosing between life and death for other characters, and even the survivors are often shuffled off quickly because they might have died.  The Wolf Among Us does not lack for character death – it is a murder mystery, after all – but many choices will affect instead how characters react to Bigby later, and you can be pretty certain they won’t die by the next episode.  (It helps that Fables are practically immortal and nearly unkillable.)

Bigby’s actions matter, and they matter beyond the climax of each episode.  He’s not fighting for his life (at least not always), but doing his job, and why he bothers is a question that more than one character poses to him during his investigation.  Is it a sense of attachment to the murdered girl?  Is it white-knighting for the benefit of Fabletown’s deputy mayor, Snow White?  Is he just trying to protect the idea of Fabletown?  Hell, is Fabletown even worth protecting?

The best game narratives make us consider, really consider, our opinions on complicated matters in ways that no other medium quite can.  Even in a game without functional agency, the fact that we, as players, must act on whatever belief our avatar holds in the story, but mostly we can compartmentalize that as being what we are “supposed to do.”  But games like Telltale’s ask us these questions and ensure us that, at least sometimes, our answers have consequences.  This isn’t, at this point, new, but The Wolf Among Us does it very, very well.

We expect world-shattering choices after the heavy hitters of the emerging interactive narrative realm.  The moral quandaries we usually face are inconceivably huge, life and death and genocide.  The tiny choices that only profoundly affect one or two lives are just filler, ways to fill our Paragon meters.  But those are the choices that The Wolf Among Us thrives on.  Despite being inhabited by fantastic characters, the situations are more down to earth, and more dramatic for it.  Whether or not to have a character who can’t afford a glamor (a spell that disguises them as a human) shipped off to the Farm is built upon over several episodes instead of a single scene or side quest.  Whether to take a hard-line approach to solving the crime or try to act more reserved matters, too, especially late in the game.  After confronting Fabletown’s secrets, its flaws, its inequities, repeatedly, The Wolf Among Us will make you consider all that you’ve learned and where, after everything, you stand.

And for at least a moment, you won’t be.

Mirror, mirror, this truth unveil: how might I reach Dix by mail?

9 Responses to The Wolf Among Us