What happened to Bulletstorm? It’s a fair question. Here’s a game that – while admittedly not for everyone – was a highly innovative and gorgeous shooter. Tightly designed, cleverly written, well put-together, from a collaboration between two of the most reliably competent genre leaders in the industry. It didn’t go seriously over budget, it wasn’t late, it wasn’t buggy, it didn’t promise one thing and deliver another, and it didn’t rehash World War II or Americans-killing-Arabs memes. The critical reception ranged from positive to gushing; it shipped on every major platform. It was, by all accounts, the definition of a new IP blockbuster.

Maybe if Bulletstorm had really cratered, if it had sold, like, Psychonauts numbers, that would’ve been better. A game like Bulletstorm needs to either live up to expectations or sell so poorly that it’s obviously a freakish outlier (like Psychonauts).  Instead, it sold “okay.”  And in doing so, it became a disappointment. Indeed, AAA games like Bulletstorm only have three possible end states:

Freakish outliers are economically undesirable, but psychologically they’re better than disappointments. A freakish outlier is, by nature, freakish (and an outlier). It means something is wrong. Typically there’s an identifiable root cause – Psychonauts was never going to sell a bazillion copies, but it might have sold five hundred thousand. It’s done much better since, with Steam and Humble Bundles, but the tail numbers for Psychonauts hovered at around 43,000 sold and maybe 90,000 shipped. It was a catastrophe. And it was thus because Majesco, its North American publisher, didn’t market it correctly – a bad thing made worse by the fact that a game as strange as Psychonauts needs a perfectly crafted message or it’ll tank utterly. The same thing happened with the film Zoolander and, to some degree, Bulletstorm.

Adrian Chmielarz is someone for whom I have great admiration. At People Can Fly he led the development of Bulletstorm and Painkiller, two games so foundationally excellent that the passage of years has hardly affected them. He really understands games, far more than most professionals in the business. His writing shows a profoundly ludic mind, someone who comprehends both the nebulous idea of “fun” and the formal mechanical constructs that must underpin it. He also – and this is what makes him a real triple threat, and an industry rarity – he also understands the business. Chmielarz is pragmatic without being jaded and visionary without being unreasonable. In a recent interview with Gamesindustry.biz, he talks about his departure from People Can Fly, his new offbeat studio The Astronauts and its even more offbeat debut title The Vanishing of Ethan Carter, and, of course, about Bulletstorm. 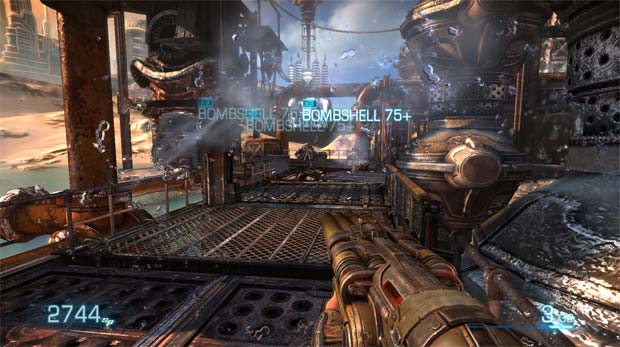 But the question I asked at the beginning – what happened to Bulletstorm?

You’ve got a big-budget, big-hype shooter using the most advanced Unreal technology. You’ve got fresh ideas in a stale genre, from the game’s Skillshot system and energy leash. You’ve got a colorful setting that flies in the face of the shooter norm, and a balls-out comedy, which is practically unheard of. You’ve got Tanya Jessen producing and Adrian Chmielarz directing, and that’d be a dream team even if they didn’t have the combined forces of Epic and People Can Fly backing them up. You’ve got an excited industry press, a great prerelease publicity thing with FOX news saying Bulletstorm would make you rape people, and – once it does ship – you’ve got really good review scores.

You’ve got less than a million units sold.

What happened to Bulletstorm?

One of the points Chmielarz makes in the GamesIndustry interview is that in AAA, budget, development, and expectations are out of sync. This creates a lack of perspective that in turn leads to assumptions that shoulder a larger-than-ideal burden of risk. If you’re making the next Call of Duty, you can reasonably assume it will sell well… so you can reasonably jack its budget into the stratosphere. History backs your assumption, but it’s still a risk. And sometimes you get a nasty surprise, either because you didn’t take everything into account or because the planets didn’t align. 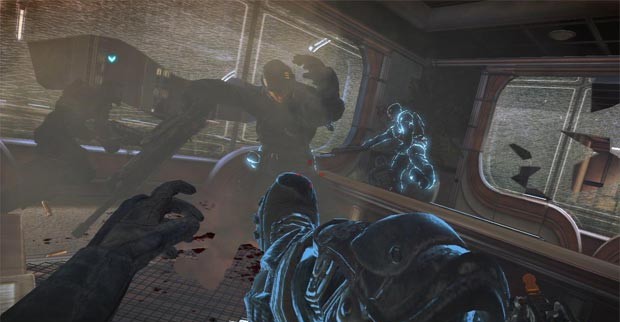 Look no further than Lady Gaga, to whom we can generally look for illumination, for further evidence. Her album Born this Way sold 1.1 million copies in its first week. She was a star. She wore a meat dress. She was on everyone’s Hot Influential People Lists. Her label could reasonably assume that her next album would do equally well – or better – given the Barbara Walters interview and the meat dress and whatever else Lady Gaga got attention for. But Artpop did not do equally well. It did 75% worse.

But why?! What about the meat dress?

There are a million possible reasons, any combination of which could’ve conspired to bring this outcome. Born this Way had a big promotion where Amazon sold it for $0.99; maybe more people bought Lady Gaga’s album than actually like Lady Gaga. Maybe people were mad about the meat dress. Maybe Artpop sucked. Personally, from my rarefied position of knowing practically nothing about Lady Gaga, I’d speculate that popularity backlash was the culprit – people always turn on something when it reaches its fame apogee.

But still, if I were a recording industry executive, I’d be a lot more likely to bet on Artpop’s success than on its failure. In hindsight it’s easy to see why the album might have failed, but as Chmielarz says, “Everybody is smart in retrospect.” 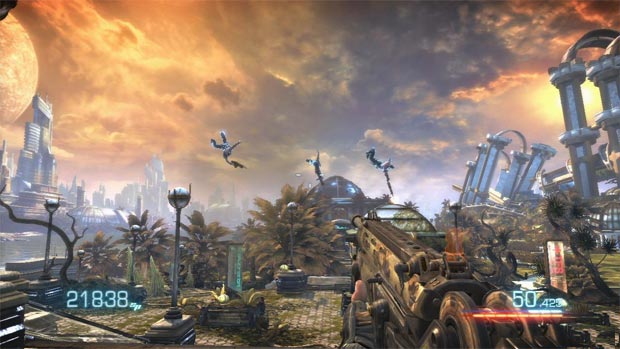 What I personally don’t get with Bulletstorm is there isn’t any obvious hindsight, and I’m not sure I agree with Chmielarz’s view that the marketing’s focus on dick jokes distracted from the many innovations Bulletstorm brought to the genre. First, it had a lot of dick jokes and avoiding that would’ve been rather disingenuous. Second, crafting a message based on Bulletstorm’s new ideas would be very hard, while crafting a message based on dick jokes is easy. Third, I’ve never been sure of the influence marketing has on game sales, and tend to believe that beyond a certain awareness threshold, news coverage is far more valuable. Fourth, did the message focus on dick jokes? Last I heard Bulletstorm’s tagline was Kill with skill, which to be honest does a pretty good job of highlighting the fundamental innovation it offers.

So what happened to Bulletstorm?

As for the risks, there certainly were some:

Risk is just that: the possibility of negative influence. Presence of risk doesn’t guarantee a bad outcome. As far as I know, there were only two measurable albatrosses circling Bulletstorm; only two flat-out, balls-to-bones BAD THINGS exerting harmful gravity:

Those are both serious negatives, but even combined are they enough to drive <1M unit sales on a game forecast to deliver four times that? I can’t imagine that GFWL or a middlin’ demo convinced three million people to stay away. The PC isn’t that big a segment, and within a week everyone was saying that the demo didn’t do the game justice.

Something else, and maybe I’m alone here: until about three weeks before the game came out, I thought Bulletstorm was multiplayer only, and so hadn’t followed it at all. Why I thought this I don’t know, but it’s a hard stop for my interest level and even my reverence for People Can Fly’s earlier work wasn’t enough to change that. After being unimpressed by the demo, I only bought the game because I’m a consumer whore who buys everything. Maybe others were similarly misguided and didn’t buy it at all? 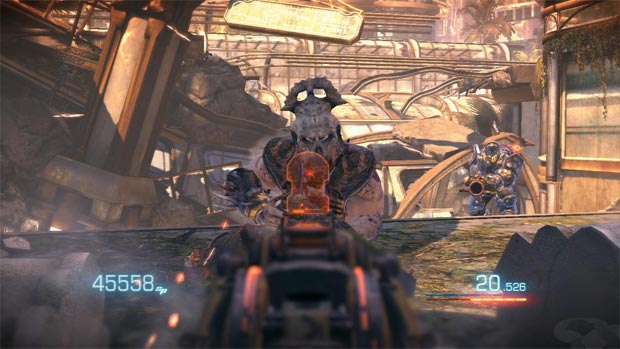 Or maybe it was the tide. Chmielarz suspects so – he’s far too savvy to blame marketing alone:

…looking back I do think that we were possibly among the first victims of this giant shift in gaming, where the middle-class AAA games began to die – not ‘middle-class’ by quality, but we didn’t have ten multiplayer modes and co-op and all of that. The saying in the industry right now is, ‘If you want to sell a game for $60, to the player it has to feel like $200.’

This is undoubtedly true. Bulletstorm’s 2011 release predated the major expectational shift we’re seeing today, but the Steam Sale was a known quantity even then and this game felt like a big budget monolith. Maybe that rubbed people wrong. It’s also possible that the gamer majority really does want Call of Duty over and over again, so Bulletstorm’s cleverness and script and stuff just didn’t resonate. Those are both impossible to measure, and in the end I suspect the game’s fate was largely determined by these or other variables, either ones that are similarly hard to quantify or just so weird no one would think they could have that much impact.

I prefer to believe that chaos theory had something to do with it, because otherwise it’s befuddling. Bulletstorm wasn’t Psychonauts, it wasn’t LA Noire, it wasn’t Hellgate London or APB or the Tomb Raider reboot. All of those “failed” for very explicit – if not always very good – reasons. Bulletstorm wasn’t like that, it had everything going for it: quality, pedigree, innovation, design, press, money, everything.

Reasons are rarely cut and dried, and we mustn’t forget that the butterfly effect is real as well, in which case it would be impossible to determine the root cause of Bulletstorm’s disappointing returns, even if it’s plain to see. Adrian Chmielarz argues for perspective in the AAA world; he asks for a return to modesty. The AAA world has forgotten that not every game is the next Assassins Creed franchise, nor is it desirable for every game to aspire to that. Ecosystems can’t survive without a food chain; the lions and tigers and bears need to remember that they owe it all to the bugs and microbes.

That’s what Adrian Chmielarz and The Astronauts are up to now – they’ve done the bear, and The Vanishing of Ethan Carter claims to be everything Bulletstorm wasn’t: quiet, staid, somber. Most of all, since I suspect Chmielarz is wise enough to take his own advice, it’s not likely to be a failure if it “only” sells a million copies. In fact I think they’d be thrilled with that number.

Call Steerpike a “fungal rimjob” by clicking this link.

7 Responses to Storming the Castle