Have you ever had a night that lasted forever?

Metaphorically, of course: time did march on, you woke up the next day, but at the time, the night just seemed endless, stretched out before you independent of actual time?

When I was younger, it always seemed to happen around Halloween. One year I did the party hopping thing, and in some sense I feel like I am still doing it. We went to a bar, and had a few drinks, then I’d be in the back of a friend’s van, costume-watching on the street, then somehow in the basement party of a total stranger, singing karaoke and drinking Red Bull to stave away the coming of the dawn. Somehow it was still dark when I arrived at home. When I was younger, I had one memorable summer midnight. We had a picnic on a mountaintop in Vermont, and went hiking after midnight with flashlights to the place where the fireflies breed: an endless twinkle of flashing and flickering of insects with no clear line between their restless dance and the millions of stars above…

Your nights are different, but you’ve probably had at least one. A night of images and flashes but no coherent thread of a story, where you were sure where you were, but don’t remember how you got there? They made a video game about all those weird hazy nights. It’s called Kentucky Route Zero. 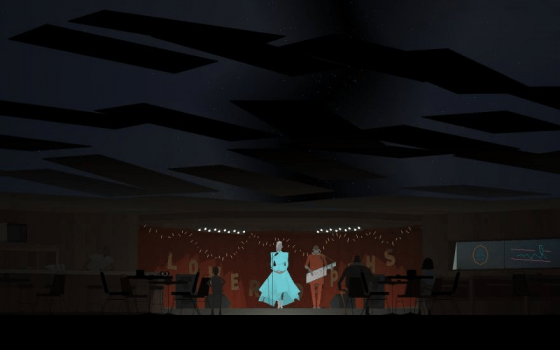 Episode Three of Kentucky Route Zero (spoiler warning) has a powerful musical segment at about the midpoint. In the game’s context, your band of adventurers is on the road and come across a pair of performers who are headed to a gig. Following them has nothing to do with your quest at hand, but yet, they leave you no choice, interrupting any dialog option you might choose to deny the invitation. After a sad song in a dark bar, these two musicians become members of the party, such as it is. During the signing of the song, “Too Late to Love You Now,” the player is allowed to select which lyrics come next.

In many modern adventure games, it’s not really possible to lose, per se. There’s no Game Over or fail sequences to speak of. But it’s entirely possible to get stuck in these games, unable to proceed because you just don’t know the right answer to a puzzle, or don’t have the right key for a partciular door. Kentucky Route Zero, a point and click adventure game in many other respects, removes that friction almost a hundred percent. Dialog selections in the game impact not just the present and the future, but also the past. So, before singing “Too Late to Love You Now,” the character Junebug implies that you (perhaps as the player, but referring also to the primary player character, Conway) heard the song before, so you already know the words. This is true no matter what, and whatever words you happen to select turn out to be the correct words, entangling the present and past as one.

By this point, I was used to the way the game handled dialog selections and there was never any fear that I’d fail the musical sequence. So when the roof opened up, and the stars shone over the dark bar, I didn’t feel worried that I was going to somehow fail or mess up the sequence that came next. The feeling I had instead was asking myself: “What the hell time is it, anymore, in Kentucky Route Zero?” 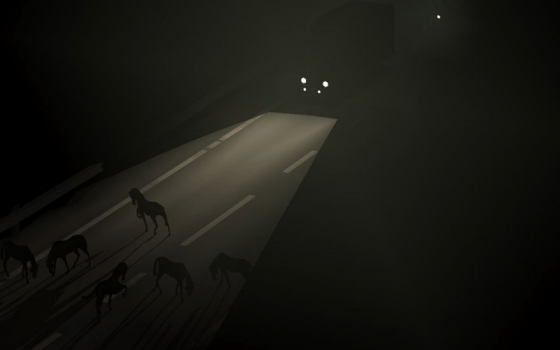 The story of the game is such a long tale, with so many weird little interludes, that from episode to episode it’s difficult to follow a coherent arc. The result becomes a story of images. Conway gets from setpiece to setpiece, sometimes by some unusual conveyance, but mostly by driving his old antique truck. But the narrative “why” becomes increasingly lost from moment to moment in the game. In a lot of games that would feel like a writing failure. In games with long, tangled quest arcs, realizing that the quest has become impossibly convoluted is like seeing the Emperor without his clothes for the first time. You’re often one step from the light shining in your eyes and wondering, “just why the hell am I doing all this?” Kentucky Route Zero made this common problem into a feature instead. You’re having one of those weird, endless nights. Conway has a delivery to make, but every other moment, anything could happen.

So when the music began, I first wondered about the in-game clock, and then I didn’t care. I remembered what it meant to be in the moment during a long, strange night when the clock didn’t matter. I thought about that night at the firefly picnic, watching the little digital stars onscreen remind me of real stars in a place that I can’t remember how I found and will never return to again.

Later in the game, when Conway says something is going to happen “in the morning” the very idea is laughable. There’s two episodes left of Kentucky Route Zero, and I get the feeling that morning is somehow never going to come. Even if it does… it won’t really come. I’ll still be in the bar, at a party, in the dark, or on the Zero, marveling at the impossibility of dawn.

8 Responses to The Endless Night of Kentucky Route Zero