The most obvious place to start – one of the only obvious qualities it has, really – is that The Vanishing of Ethan Carter is unquestionably the most visually spectacular game I have ever played. Even if there weren’t anything else to say, that might be enough. If your computer can run it (and it’s punishing, but not too punishing) you probably need to buy it just to see the incredible technology The Astronauts bring to bear on this indie mystery. It’s simply jaw-dropping. Your jaw will drop. Which is harder to do than you think. Have you ever tried to drop your jaw? I just released my jaw muscles and my jaw stayed more or less where it was. It moved a little. But I wouldn’t call it a “drop.” You have to actively drop your jaw. The Vanishing of Ethan Carter will make you do that.

TVoEC is the debut title from The Astronauts, an indie studio headed up by Adrian Chmielarz and some of his fellow ex-People Can Fly employees. Chmielarz and friends left People Can Fly shortly after releasing Bulletstorm, insisting they were tired of big AAA releases full of guns and space marines, insisting they wanted to do something small, thoughtful, maybe artistic. Had Bulletstorm performed better it’s possible they’d have remained at the studio they founded; but Bulletstorm’s “failure” (which is to say its failure to perform as expected, versus any kind of real failure) was high profile and probably quite demoralizing. It was also not their fault – it was nobody’s fault, Bulletstorm was fantastic, it just didn’t sell, who knows why – but even though I can’t imagine why anybody would blame Chmielarz & Co., working on a game like that can be really tiring. The Vanishing of Ethan Carter is the development equivalent of taking a couple weeks off to camp in the woods after a long project, realizing you like it out there, and refusing to come back.

is the first thing you see upon starting The Vanishing of Ethan Carter. Shortly thereafter you see stuff like this:

I MEAN COME ON.

With almost perfect clarity I can remember one of the more inane things I’ve ever thought to myself. The year would’ve been… 1994, maybe, and I was playing DOOM. E1M1, specifically, the first level where, if you recall, you can look through many windows and see mountain ranges outside. 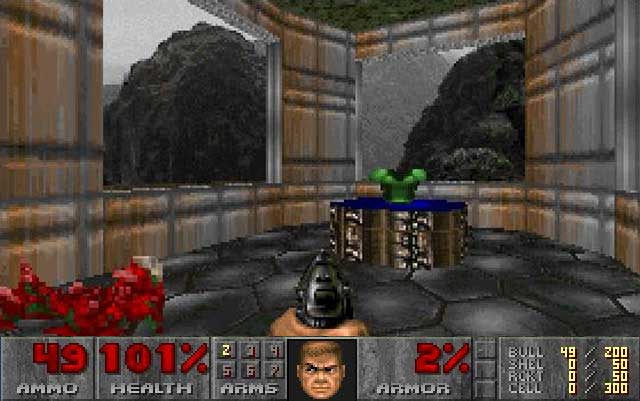 Look at those mountains and picture me – just imagine me if you don’t know me – at nineteen years old, my eyes already showing hints of that distant, melancholic wisdom, that inexpressible old-soulery that will define my adult life, my young face more innocent than devil-may-care, before years of time and misery and high adventure would take their toll and render on me the battered but roguish look of a man who’s seen the world and gets the joke but is just so over it, yet retains a rakish je ne sais quoi. Imagine me like that, lit by the glow of E1M1, and lose all respect for me as you imagine me thinking the following thought:

Dude, you are never going to see graphics better than this.

I was nineteen and should have known better, but there you have it. Looking at those mountains then, with the subtleties of their shading and the way they seemed to disappear foggily into the farther Martian distance. I had never seen anything so beautiful. And yeah, I use the world beautiful knowing what it means and knowing most people would argue that there are more beautiful things, probably outside of a video game, and that realistically I had seen them, but I have always been the kind of person more moved by beauty in fake worlds than in this real one. The irony is the completeness with which I believed the above thought. Drink it in, I said to myself, as though DOOM might suddenly go away and I wouldn’t be able to look at the mountains any more. It won’t get better.

As to what The Vanishing of Ethan Carter is actually about, that’s a thornier question. This is, as implied above, a narrative game that does not hold your hand. Paul Prospero is a figure, evidently, of some renown, a detective of the abnormal, a para-sleuth maybe a little like Edward Carnby from Alone in the Dark, but with a better nose for publicity. He has arrived at the town of Red Creek Valley at the behest of young Ethan Carter, a kid of indeterminate age who wrote him a letter. All this Prospero tells you as you walk through a train tunnel and come out into the woods a few miles shy of town. He also tells you that he gets lots of mail like this, but something in Ethan’s letter put a needle of fear in his heart. Fear for the little boy, who apparently sees and knows way too much about the spirit world; fear for the town, which at this point is still a question mark, even fear for Prospero himself, who makes the cardinal mistake of stating that this will be his last job before retirement, which any freaking moron knows never to say.

And from there proceeds a game about as unlike Bulletstorm as anything you can possibly imagine. Last I heard Chmielarz said there was no action in the game, which suits the idyllic tone of its score and the lush natural wonder of the visuals. It’s a mystery, but I think it might be more than that too, even just a few hours in as I am. The meta-mystery is what has so far intrigued me, far more than the under-mystery of Ethan Carter and where he vanished to. The meta-mystery couched partly in the mundane, partly in the creepy. Where is this place? When is it? Why is everything so crumbly? Why is there a pair of legs on the train tracks? Who do they belong to? Oh, they belong to this corpse down the way. Why is most of him over here and part of him over there? Did his legs detach themselves or were they removed? Was he a willing participant in their departure?

These and other questions will hound you throughout TVoEC, which plays very simply. I recommend a controller because you’ll get smoother walking speeds with analog sticks, but it comes from the house that Bulletstorm and Painkiller built, so mouse/keyboard controls work just fine. As Paul Prospero, psychic detective, you must detect. By the way, like The Tempest’s Prospero? TVoEC has a distinctly unreal quality, and I don’t mean the engine. The Tempest, too – though not as much as A Midsummer Night’s Dream of course – has a distinctly dreamlike flavor profile. Before long I found myself wondering if I was actually in a place at all. From time to time, you can peel away the fabric of this world and peer into an eerie blue subworld, too, but I haven’t seen any good clues in there yet. Most of the game is spent exploring and keeping a sharp detective’s eye out.

I wouldn’t say clues are “everywhere,” but many are scattered around. Some you can’t miss, because Mr. Prospero’s psychic twinkle plays them back for you – audio memory scenes of stress-filled conversations, of whispered plans and discussions of others. Abandoned houses, particularly and unsurprisingly, are common hosts for these memories. Other, stranger things, sometimes very frightening, can happen in or out of houses. Beyond that, the physical evidence (which requires finding but is rarely hard to find) suggests that something very brutal and evil happened in Red Creek Valley recently, and Ethan Carter may only have been peripherally involved.

The Vanishing of Ethan Carter reminds me, oddly, of Heavy Rain, but only in one particular way. When Prospero sees stuff that’s worth looking at or fiddling with, a sort of word-cloud swirls around it, creating the impression of his detective’s mind clicking through objective observation and deducing possibilities from there. It’s as if many disparate thoughts are coming together and eventually crystallizing into a whole. That whole then remains to highlight the object of interest. So, for example, you see something on the side of a mausoleum:

And your brain gets to work, puttering through thoughts and ideas:

Before finally settling on a pat definition:

It’s a lot like the hint system in Heavy Rain, which also textified your character’s thoughts (except one very important thought along the lines of I AM THE KILLER) to provide guidance. Oh, and in those shots there’s a rock in the background with an oil can on it, and some matches, but no oil lamp. So it says Oil Lamp? By which it means “go find an oil lamp to put this oil in and then light up with the matches,” but actually there’s more to the oil lamp puzzle which I won’t mention on account of spoilers.

So what you’re dealing with in The Vanishing of Ethan Carter is an exploration mystery set in one of the most visually stunning and fidelicious (I just invented that word – half fidelity, half delicious) environments ever created. I’m trying to avoid the word “beautiful,” not because of my DOOM stupidity but because “beauty” isn’t necessarily defined by fidelity. What TVoEC is is stunning, evocative, lavish, unparalleled visual sense of place. It’s like having your eyeballs licked, but in a good way.

Fair warning, then: this is a very slow-paced game and I hear it only takes 3-5 hours to complete. All that eyeball-lickery demands a certain degree of horsepower, too, though less than you’d expect. I’m running it at 1920×1080 on high-ish, and my aging 560Ti still keeps the framerate wandering between 20 and 50 most of the time. The Astronauts have invented a bunch of new graphics technology, the details of which I forget, to allow The Vanishing of Ethan Carter to look the way it does, and it’s really a staggering experience. Rarely will I recommend a game based on visuals alone, especially when so much else about it will be subjective (it really doesn’t hold your hand, by the way, so prepare to figure plenty out on your own), but I’m going to take the plunge here. Visually, I’ve never seen anything remotely close to The Vanishing of Ethan Carter. And the game, this cerebral mystery with a tinge of Lovecraftian horror, its heavy use of Orthodox Christian symbolism, its sun-dappled presentation of a landscape where something awful’s recently happened, that is really impressive as well. It may not be what I expected from the creators of Bulletstorm or Painkiller, which is probably unfair. Take the guns out of those games and you get the same amazing attention to detail, the same often-gruesome nihilism and the same fascination with life after death, often presented in unexpected and astonishing new ways.

The Vanishing of Ethan Carter has a lot going for it, and at $20 it’s not going to do much harm to the wallet. Even if it turns out to be disappointing (which I doubt), I want to see what The Astronauts have planned next. So make with the credit card.

Steerpike might come investigate the paranormal in your town if you email him.

But probably not. I’m just saying. Steerpike is afraid of ghosts.

9 Responses to Impressions: The Vanishing of Ethan Carter