There is a lonely house to the south of Hyrule Castle, perplexingly positioned atop a small hill for no apparent reason other than its fairly central location in the realm.  The house has been there for at least two hundred years. It is not obviously part of Kakariko Village, to the west, nor is it, in any special way, associated with Hyrule Castle itself – although its occupants tend to end up there in times of need.

Although it is easy to forget in a post-Ocarina of Time world, modern Zelda was really defined by A Link to the Past.  Link’s sole SNES outing solidified the handful of tropes that the first two hinted at, and established a generous inventory of Zelda mythology.  It introduced the Master Sword, and the power of the assembled Triforce to grant the wishes of its owner.  It was the first to use parallel worlds as a major game mechanic.  It kicked the side-scrolling, experience-grinding gameplay of The Adventure of Link to the curb, and cemented the classic top-down view as the way 2D Zelda games should be, now and forever.  It started toying with actual puzzles in the dungeons in addition to challenging enemy encounters.

A Link to the Past is remembered, and rightly so, as a pinnacle of the Zelda series and of the 16-bit era.  It remains fiercely playable.  Of all the Zelda games, this has been the one that fans most voraciously wanted a follow-up to (despite the fact it technically has three sequels already), because it is just a fundamental classic in a way that has seldom been replicated.  This is where A Link Between Worlds comes in, of course, a sequel of sorts in a series not known for its sequels, a long-awaited homecoming to a Hyrule now rendered almost quaint in its scale.

And it starts in the same blasted house. 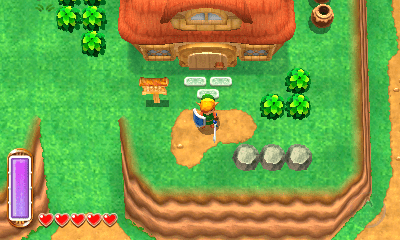 Haven’t We Been Here Before?

The Legend of Zelda has fallen into a bit of a rut over the years.  Although the games are categorically pretty great, they lose their luster with each successive title from sheer sameness.  Since Ocarina of Time‘s wild success and continued critical acclaim (and Majora’s Mask‘s lukewarm reception, despite being one of the best Zelda games ever), Nintendo has been understandably hesitant to deviate far from the formula.  Even through new input devices in the Wii and the DS, Zelda games increasingly feel like they’re going through the motions.  They’re great, but the more you play, the less astounding the next is.

A Link Between Worlds, at a glance, is the epitome of this trend.  Anyone who played A Link to the Past will recognize a startlingly large portion of the overworld – on many screens, right down to the placement of the bushes.  It sounds the same.  It uses a control scheme light on the touch screen, so but for using a stick to move, it feels very similar.

And it starts in that house.

Of course, it doesn’t start exactly the same; instead of awakening to find his uncle going out to die for ambiguous reasons, Link is woken up to go do his job as a delivery boy for the local blacksmith.  But that delivery – a sword for the captain of the guard – takes him to the castle, and then to the Sanctuary, via a route highly reminiscent of that in the beginning sequence of A Link to the Past.  It’s a new situation that manages to be very, very similar, but, to its credit, it feels more like an homage at this point.

As is usual, however, Link quickly stumbles into the middle of a crisis: a wizard named Yuga shows up and starts turning people in paintings while muttering something about how ugly he thinks this world is.  Link takes it upon himself to intervene, and one thing leads to another, as it does, and soon Link is building an arsenal, slaying monsters, adventuring through ten different dungeons, and traveling to an alternate dimension. 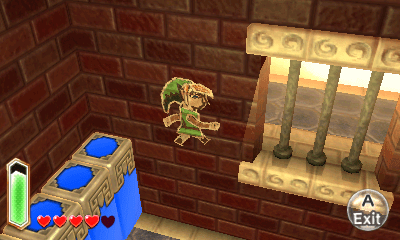 One of Link’s strangest abilities ever proves to be cooler than it looks.

All of which sounds pretty by the numbers as Zelda goes – especially considering how near identical the overworld is to A Link to the Past‘s.  Some of the hidden items are even in the same places, and the dungeons are in the same locations, too (although the Ice Ruins and Turtle Rock are swapped for some reason).  Link’s new ability to merge with the wall, graffiti-like, and move along it to reach otherwise-unreachable places is a cool ability, used well, but that is also par for the course: Zelda‘s gimmicks tend to be well-applied.

But this is the best Zelda in years.

A Link Between Worlds offers a tight, fun Zelda experience, but more importantly, it blessedly tries some more radical changes to the formula.  By far the most significant is the new item rental system.  Thanks to a traveling businessman dressed like a pink bunny-thing who sets up shop in Link’s house, Link can rent the majority of his important arsenal from very early in the game.  The bow, the bombs, the hookshot, the boomerang, and more are all available for rent for just a few hundred Rupees from basically after the first dungeon.  Link can keep these items until he dies, at which point they are repossessed and must be rented again.  Seasoned players will likely only have to rent items once or twice, ever, since the game ultimately isn’t that difficult – though it does add a bit of extra tension in those occasions when things do start looking bleak.  Later in the game, the items can be permanently purchased. 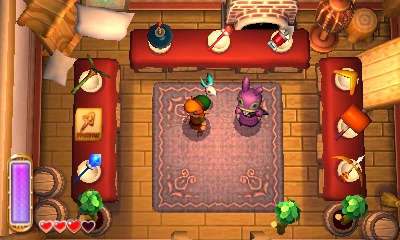 I’m…not sure I can return these bombs in pristine condition.

This has a few important effects on the game.  Rupees are plentiful; a short way in Link will be toting thousands with him.  The dungeons no longer have a singular item hidden within around which progress is built; instead, in addition to the usual dungeon items (the compass and the big key), each dungeon has an optional bit of equipment: a fragment of ore that can be used to upgrade Link’s sword, a new tunic to reduce the damage he takes, a scroll that increases his Dark Souls-like stamina gauge on which his special items draw.  These are substantial rewards, but can technically be skipped.  These items are a bit better hidden (though still not terribly hard to get) within the dungeons than the major parts of Link’s inventory traditionally are.

This means that, for the first time in quite a while, a Zelda game’s dungeons can be tackled in nearly any order.  Though the first dungeon is prescribed, the latter two in Hyrule can be tackled in either order, and all seven in Lorule (the new Dark World) are available from the first time Link sets foot there.  Indeed, the game doesn’t even really imply an intended order.  Each dungeon requires one or two particular items for many of its puzzles, but usually this item is also critical to getting to them at all, and as long as Link brings that item along he can get through the dungeon’s challenges.  The downside here is that the dungeon design, while good, does feel a bit loose; some of them don’t have the complexity of traditional Zelda dungeons, particularly late-game ones, since they can be hit in any order and there is no guarantee what items Link will have with him.

Finding out how to get to the dungeons, particularly in Lorule, requires a bit of exploration.  Lorule is fragmented, with huge ravines torn in the landscape, so Link can’t just go through and reach any location he pleases.  Some dungeons are very tricky to reach, but since they can be done in any order, getting stuck on one dungeon-opening side quest can often mean just going after another instead for a while.  This sense of freedom and exploration is something that Zelda has severely lacked in recent iterations, which have tended toward tightly designing the game’s progression according to the items Link acquires.  It feels like a daring, but thoroughly refreshing, switch – if not one that goes over perfectly.

The dungeon design is never bad, but it sometimes falls short of great, and that’s perhaps a consequence of the non-linearity.  Previous Zeldas that featured the ability to do dungeons out of order tended to have more combat-based dungeons than puzzle-based ones, unlike A Link Between Worlds, where puzzles are key.  The system needs a bit of refinement in that regard.  A Link Between Worlds could do with being a bit more difficult, too – combat is seldom boring, but it isn’t terribly challenging.  The game does have an unlockable, harder Hero Mode, but Zelda vets might just wish that were available from the get-go.

The result is an excellent mix of some old school trappings with a dash of new ideas that turn on its head a part of the Zelda series that we have long taken for granted.  A Link Between Worlds will likely be a divisive Zelda title as time goes on, because the changes will displease some, and it perhaps doesn’t reach the classic heights of its spiritual predecessor.  But it is a breath of fresh air in a serious thoroughly in need of one.

12 Responses to The Legend of Zelda: A Link Between Worlds

Taboo Snaps – A game for REAL men (and desk jockeys)