In the first of my news round-ups, I thought I’d start with the mighty Guild Wars 2. It has been a busy couple of weeks in the world of massively multiplayer games after Gamescom and PAX,  so I wanted to link a good few news stories, videos and blog posts of Guild Wars 2 that might interest some of you who share my addiction, or for those that havn’t had your ear to the ground.

In the coming days I’ll be doing a separate post for other MMOG’s I’ve been keeping my eyes on.  Hit the jump for tear inducing goodness.

ArenaNet don’t do things by halves and they have finally revealed concrete details of player versus player combat, exhibition matches and a new demo that allowed players to get their hands on seven of the eight revealed classes, access to all races including the newly revamped Sylvari and the squishable Asura as well as the character customiser.

Firstly, you can find the ArenaNet flikr pictures here and a great run through of the character customiser here.  Sadly, though the customiser looks solid having just played EVE Online it feels like the only unoriginal element of Guild Wars 2.  Wartower have also kindly provided some fantastic 1080p footage of the player versus player exhibition match here.

A personal favourite of the videos trickling out from the Guild Wars 2 camp is Total Biscuits coverage.  You can find both parts here and here and they are both absolutely worth a watch (we Brits don’t all sound like that, do we?)

If your still reading and are eager for enough Guild Wars 2 information to melt your mind, head on over to Guild Wars 2 Guru’s ultimate Gamescom thread which lists almost everything that Guild Wars 2 had to offer at the event.  There is probably enough information there to see you through until the game launches.

If you havn’t read the ArenaNet blog in some time I suggest you check out the PVP overview.  As well as providing some details relating to the first of the PVP map, The Battle of Kyhlo  as well as the making of it.  What I find surprising however, is that many news outlets have barely covered ArenaNets “Hot Join PVP” (or if they have, they have gotten it completely wrong) which is undoubtedly a genre first and deserves much more attention than it is getting.

In other MMOGs that have PVP content, such as WoW or Warhammer Online, you tend to just queue for a random arena or match and the game will do the rest for you. Where problems arise is that you have no idea what PVP match you are joining, whether the sides are even or how long the match has been going on for. ArenaNet intend to change all that by implementing in game “servers” that players create that is similar to the lobby system in League of Legends or selecting a server in any number of first person shooters. 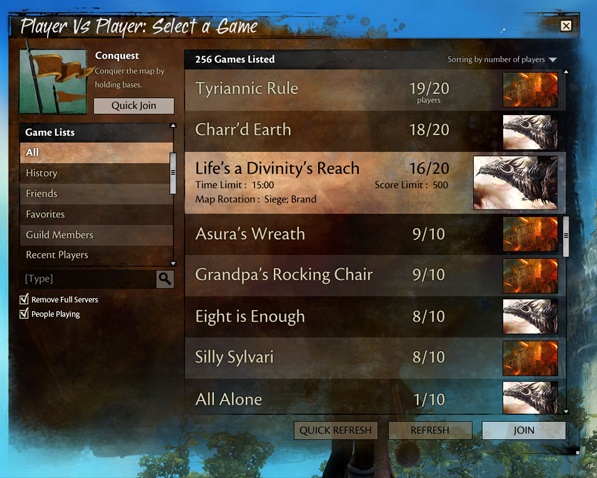 Players can browse through a list of available games, each displaying the current map, the number of players, etc. Players can search by server population or friends list. Even if a game is in progress, you can join or leave at any time. If one side loses players, the servers can auto-balance the number of players on the teams. Once the current round ends, the server loads the next map in the rotation, players can reselect teams, and the fight starts again. This kind of setup allows players to find favourite servers and build online communities by playing more than one game with the same settings and people

I must stress that players don’t host external servers or run them independently, these are in Guild Wars 2 itself.  It sounds great and will only go to strengthen Guild Wars 2’s stance as a potential E-sport.

Next up is a short but sweet article by our very own Ravious about the unveiling of Guild Wars 2’s PVP. I’ll also send you in the direction of Vorsakens latest indepth analysis of each GW2 class and the changes ArenaNet have made and how he considers it has improved or reduced the effectiveness of each class. I must warn it is in depth numerically but don’t be put off- he does great things for the GW2 Guru community!

Massively have some reasonable coverage of PAX with an Asura hands-on that’s worth a read.  Finally, and before your heads drops off with Guild Wars 2 news, be sure to head to the Utlimate PAX thread over at Guild Wars 2 Guru for plenty of links to interviews, videos and blogs.

Oh and one last thing, below is a stunning video of the latest GW2 trailer. I meant to link this over a week ago but I’ve been up to my eyeballs in news.