Time for the news.

This weekend I’m going to be participating in the Extra Life game charity drive. I’m playing games for 25 hours as part of the Schell Games team, benefiting the Children’s Hospital of Pittsburgh. I hope you will consider donating to my page here! I’m getting closer to my goal and every extra bit helps kids.

Since merely having fun doesn’t feel like enough to me, I also intend to play some games that you might be interested in watching. Barring technical difficulties, my gameplaying will be streamed live starting at 8 PM EST on Friday, November 1. You can watch the stream on my newly-created Twitch TV Channel. I’m going to be playing adventure games, either until I can’t keep the stream open anymore or until the marathon is over. If there’s any news or updates to my schedule, I’ll post them right here. 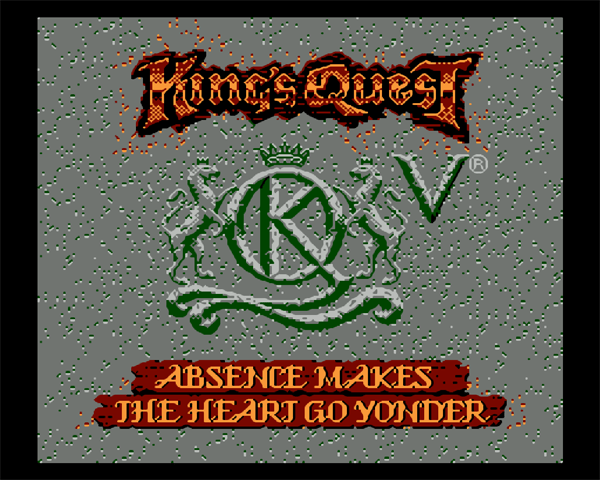 My plan is to kick things off at 8 by playing the NES port of King’s Quest V. This is an ugly, icky port of an infamously unfair game. I actually bought the cart as a kid, and I’m really familiar with the game and its quirks – but, wow, is it… not-good. I’ll show you the highlights including what it takes to be able to actually beat this game. From there I’m going to switch to palette cleanser and future My Idea of Fun Candidate Princess Tomato in the Salad Kingdom (a game often regarded as bad, but really just a silly beginner-level adventure game). Hopefully I’ll still be awake, and I’ll either move onto new titles, or take requests (I have the NES Maniac Mansion, but I’m really bad at it, so it may be indie adventures after that).

Of course none of this means much if you don’t donate. So please do! And join me Friday Evening on Twitch TV to watch games being played.

I may be doing some technical tests today, so if you want to see some streaming Horror Gaming in honor of Halloween later this afternoon, you’ll know where to find me.