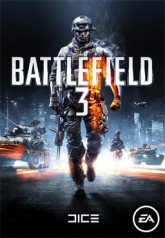 3.4/5 Middlin’
“I can only hope that these problems are fixed because without them, Battlefield 3 could be a pretty neat game. As it is, though, it needs a LOT of work.”

Graphics: 8/10 (The game is beautiful even on my mid-range GTX 260, but complaints exist with how hard it is to tell enemies from friends)

Sound: 10/10 (Sound and music are well-integrated into the game. Guns and vehicles sound realistic. Ambient noise blends into actual sound without interfering with play)

Performance: 7/10 (A few too many bugs and errors have been encountered during installation, co-op and multiplayer)

I admit being wary of Battlefield 3 when I heard about the revamped graphics engine. I knew it would take a serious toll on my mid-range PC and was relieved to realize that my GTX 260 would pass muster (if only barely). Still, the graphics for this game are worth looking at. At one point in the singleplayer campaign, your character skydives to the ground; the clouds (even on low settings) are simply stunning. You can tell that work has been done on making everything slightly grittier and more realistic, and the live-action scenes seem to flow well with the overall game.

My one complaint would be the uniforms. While they’re definitely realistic, the HUD (Heads-Up Display) for the player doesn’t provide the same recognition of friends and enemies that previous Battlefield games heightened. And while I’m relieved that I’m not staring at the same model for medics like I was in Battlefield: Bad Company 2, the way friendlies and hostiles are displayed to the player makes it difficult to identify which is which. Even the small blue triangle to the top left of your allies seems scaled down: when I played multiplayer, I shot my own teammates as often as not due to them turning the corner in front of me. Now, instead of shooting on sight, I wait for a (usually fatal) second before shooting at any players on the map.

While other areas of the game are definitely lacking, sound seems to do very well. Voices are varied both in singleplayer and multiplayer (although I never realized soldiers had to say “be advised” before seemingly EVERY order) with well-balanced ambient sound to make up for the silence between firefights. The music is subtle and yet just as fantastic as previous games.

One feature that I really like comes into play during multiplayer when one team is close to losing: music begins to play and adds “tracks” to its theme as one team’s points get closer and closer to zero. It’s effective because while subtle, it lets players know that the end of the game is close at hand.

Warning: “Be advised” that there are incoming gripes ahead.

Maybe I’m expecting too much out of a game like Battlefield 3. Maybe others have had a different experience, but the gameplay suffers from a number of major flaws that undercut the value of this game significantly.

For one, the interface (while occasionally helpful) is not always to the player’s benefit. As mentioned in my review of BF3’s graphics, it’s extremely difficult to tell hostile players from friendly ones; the resulting effect is that the player either shoots on sight, risking his fellow soldiers on friendly-fire servers, or hesitates for the fatal second that causes potential enemies to kill him. It would bother me less if Battlefield 3 had kept to the same visually-jarring same-model classes apparent in Battlefield: Bad Company 2, but the resulting effect of interface and graphics continues to muddy the distinction between friend and foe.

Tutorials are wonderfully absent in this game which is great if you instinctively know how to use all the vehicles in Battlefield 3. If you’re like me and can only control vehicles with your mouse and keyboard, you’ll start to hate the helicopter co-op mission after you’ve crashed your helicopter into the side of the mountain ten or so times; making sure your helicopter doesn’t crash the moment you lift off will occupy your time until you’ve learned to disable the mouse altogether.

Speaking of co-op, DICE has managed to absolutely bungle their first two missions. Their first mission puts you and a friend in charge of defending a camp from invaders (which would be much easier if they fixed weapon placements and what those weapons actually DO). I was excited to get the Javelin missile system, a launcher which locks on to an enemy vehicle, fires a dual-warhead rocket into the air and guides it into the top of the vehicle in beautiful one-hit destruction. At least, that’s what it’s SUPPOSED to do. You may find yourself repeatedly reloading this launcher to hit a target two or three times… at one point, I shot a tank with SIX missiles and I STILL didn’t bring it down. Since this mission lacks the ability to just use a standard, non-homing rocket launcher that doesn’t require you to stand out in the open like a stupid noob, you’re forced to slowly lock on to vehicles while every enemy shoots at you.

To add to this pain, the level designers apparently thought that putting all the guns close together wouldn’t cause any issues; sadly, they were wrong. Sometimes when picking up a weapon, you’ll be unable to pick up a different weapon because you can only select the weapon next to it. This constant switching between weapons really damages the feel of a mission where you have to act fast to stop an enemy force.

One final complaint: someone needs to do SOMETHING about the progression system. Not starting out with defibrillators makes the medi- oh, excuse me, ASSAULT class a pain in the butt. While you ARE able to hand out medic kits, this progression in reality should be reversed. The whole progression system feels like DICE decided to toss in some really useless items between the ones that actually matter and it degrades from the fun of getting one class up to a certain level.

It’s difficult to talk about this section because after playing through the entire campaign, I STILL didn’t understand what was happening. The storyline seemed to have some pretty massive flaws such as loosely-connected characters and events, not to mention that I was still scratching my head after the final plot point was revealed. If I want a brain-twister, I’ll go play Myst. Still, the game does have some pretty decent cinematic action events that don’t seem to break away from the immersive effect of the story. And I suppose I should give credit where credit is due… I liked how they portrayed characters (even if I didn’t know what was going on).

The story felt rushed and stripped of supporting points that may have strengthened the overall feel of the campaign. Some people play Battlefield 3 for the multiplayer only, but I’m a fan of both singleplayer AND multiplayer. And with this one, I was a little let down.

Ah, onto this topic. Keep in mind that my individual experience may differ from yours on this one.

For starters, Battlefield 3 wouldn’t install. This didn’t give me as much grief due to the fact that I had run into this exact same issue in the open beta and found the problem with the help of a few others; however, I wish DICE would send out uncorrupted DirectX files next time.

In an effort to make the BF3 experience more “social,” EA and DICE have made a launch platform to go into a game called “Battlelog” in addition to forcing players to start their game through EA’s Origin. This results in two separate platforms being required for play, a requirement which is especially annoying because Origin hardly does anything at all. From my play, I’ve found a number of annoying little issues with Battlelog’s system (such as the fact that the game will crash when disconnected from a server, for instance) and none of them seem to be resolved. Voice and party chat don’t flow together well as bugs exist between existing parties and integrated voice chat. Server browser filters actually keep their settings now (the beta was terrible about this), but I have to re-order the servers from highest player count to lowest every time I refresh.

I like their “Voice Activation” feature, but EA and DICE really have to do away with this in-browser launch system. It’s buggy as hell and having to re-launch the game every time I join a new one is a feature which especially annoys me.

Perhaps this game just needs time to patch up. After all, there were some major flaws Battlefield: Bad Company 2 suffered from early on in its launch. It’s not that the game suffers from un-fixable problems; many of these issues can easily be patched. Perhaps not everything, but definitely many. I can only hope that these problems are fixed because without them, Battlefield 3 could be a pretty neat game. As it is, though, it needs a LOT of work.

Email the author of this review at bearwhale@tap-repeatedly.com.