“The Experiment lives up to its name by offering a very different, shall we say, “experimental,” twist on how to play and progress in a game. Managing a primary character from a control room by turning on lights and flipping switches is unique. But is it effective and fun?”

“Someone Is There. Who’s Looking at Me?” —Lea

An initial, gorgeously done fly-over of an island beach leads us to a rusting hulk of a ship. Moving to a cabin in the bowels of this enormous vessel, we find a young lady, Lea, just waking up in a quite foggy state. You see her from a corner of the ceiling perspective, and as she looks up toward you, we surprisingly find that you, the game player, are viewing the scene through an observation camera! This point of view—player as camera, Lea as doer—is the primary distinction of an unusual adventure game.

Lexis Numerique, the French developer, has shown us creativity and innovation with previous adventure titles: In Memoriam (published later in North America as Missing) and Evidence: The Last Ritual. So it is not surprising they decided to present The Experiment (released as Experience 112 in Europe in October 2007) in a really unique fashion. I like to observe how the developer describes or sets up the game. Let’s see what Lexis Numerique has to say:

A dilapidated ship. A fully functioning control and surveillance system. A woman, Lea Nichols, the only surviving member of a team of scientists.

Monitor, control, search and explore. From behind your cameras you try to guide Lea Nichols towards freedom, but above all towards the truth. Be her eyes and ears as you help her accomplish her mission.

But beware! Remember that things are not always how they seem …

You, the player, are also presumably on the ship, in a control room, able to perform limited tasks, such as turning on cameras and lights. Unfortunately, although you can hear Lea, you can’t speak directly to her. Nodding your camera up and down for “yes” is about the best you can do. Of course, she does need your management of ship devices and does enjoy ordering you about, sometimes impatiently.

Do you like to multitask? Very soon into this peculiar relationship with Lea, you’ll be presented with up to three windows on your screen. Fortunately, the young lady thinks you’re a bit of a dolt, and she uses your initial time together as an effective tutorial. 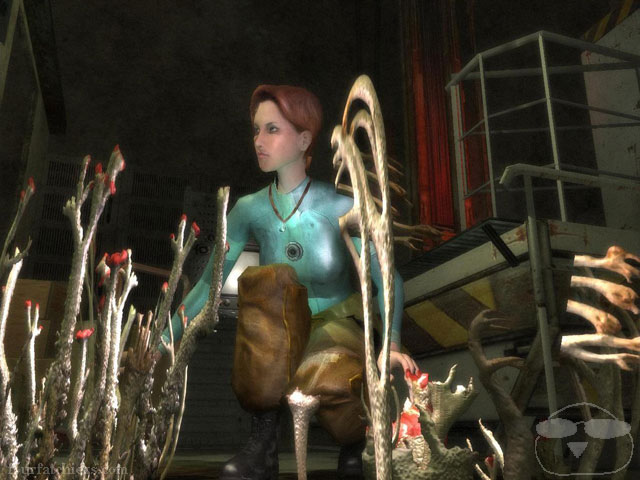 As a humorous sidebar, I was impressed when, after being away from the game for a couple of days and coming back to a save, Lea commented: “There you are! After two days with no news, I was starting to worry. I’ve found a bit of food and water.” Again, this peculiar relationship between camera controller and active doer is emphasized.

This is likely a good time to speak of some of the mundane specifics of The Experiment. Along with Lea’s in-game tutorial, we find an excellent manual, which includes comprehensive maps and even hints for the first half-hour or so. Further, once the game is installed (with no onerous copy protection scheme in evidence), you can play without the CD in the drive. All in all, packaging and presentation are very nicely done.

Indeed, “presentation” of the actual game itself is the primary distinction of The Experiment, and it can be either a bane or blessing, depending on your personal game preferences. In the darkened corridors and rooms of the ship, Lea is slowly led by and dependent on you.

Using your nicely displayed map access, you’ll guide Lea by turning on lights and using special features of the cameras. You’ll work together to decipher codes, secure passwords, read files of the scientists and technicians who are no longer to be found in person. This process forms the heart of the game, imposing obstacles and puzzles not unfamiliar to adventure game players. The primary twist, once again, is the secondary control—you as camera, Lea as doer.

The desolate ship atmosphere is quite compelling, although not frightening in a haunted house kind of way. You won’t have creatures jumping at you, and you won’t have to shoot, hit, or stab anyone. The occasional corpse doesn’t typically bother you. Rather, we have a mystery to be unraveled and solved. Toward the last third of the game, we do have some sequences requiring timing and reflexes, but these are very doable and shouldn’t impose a major hurdle. 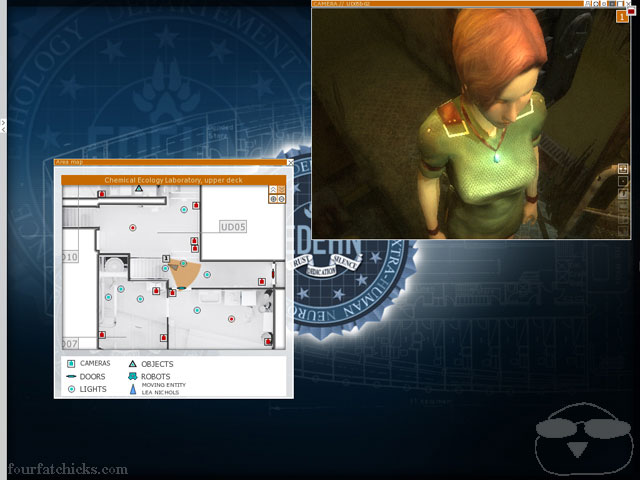 Although Lea is not the most appealing heroine I’ve ever worked with, voice acting is reasonably well done, with perhaps a few translation errors from the French. Ambient sounds and music contribute to the overall ghostly atmosphere.

Graphics seem a bit dated, but you’ll mostly be working with three screens at once and won’t think often about such precise details.

(I’m working hard here not to reveal content of the fine storyline. Let’s just say there are some interesting twists and turns. Unlike so many recent titles, The Experiment doesn’t let us down at the end but builds nicely to a satisfying conclusion.)

The Experiment lives up to its name by offering a very different, shall we say, “experimental,” twist on how to play and progress in a game. Managing a primary character from a control room by turning on lights and flipping switches is unique. But is it effective and fun?

In short, my feelings are mixed. After the initial multitasking learning curve is accomplished and the novelty wears off, we are left with a good deal of awkwardness and delay created by this secondary camera control. It’s one step worse than the complaints we often hear about camera placement in third-person perspective games. In this case, we have the third-person but with the added complication of indirect, corner-of-the-room, camera management. Further, Lea often slowly responds to the newly lit or unlocked room.

So often during the game, I wished for direct control of Lea instead of being saddled with this novel but frequently frustrating secondary approach. Instead of cluttering the monitor with multiple screens, let Lea do it herself!

Having said that, The Experiment still comes as a recommended purchase and play. The “who and where am I (we)?” mystery and story is well-written and moves to resolution with logical, though often difficult, puzzles and tasks. I’d strongly encourage you to play the demo before getting the full game. Not only is it important to see if you can run the game, but it also sets up the camera system. This will give you a taste for that and also for the upcoming adventure. If you can’t run the demo and/or the novel camera approach befuddles you, then don’t get the full game. But I’m hoping that you, like me, will move past that potential hurdle to enjoy an involving and compelling science-fiction mystery.