After the amount of yammering on I’ve done about Star Trek games, I would be remiss to not review Star Trek: The Video Game, based on JJ Abrams’s version of the franchise and bridging (some of) the gap between the 2009 movie and this year’s Star Trek Into Darkness.  The game was described at E3 as a “bro-op,” alluding to the highly cooperative nature of the Kirk-and-Spock-centered gameplay the game intends.  To adequately explore this, I called on my friend and fellow Trekker Kristine Chester of Fanboy Comics to help protect New Vulcan from Gorn invaders.

Where No Man Has Gone Before

Kristine: Video game tie-ins to movies (even without a direct connection and original story) aren’t known for possessing A-grade stories so my expectations for Star Trek: The Video Game were not terribly high going into it. Star Trek was better than I feared but worse than I hoped. As a cooperative (or “bro-op”) game it succeeds in delivering a few decent scenarios but suffers from repetitive minigames and plenty of glitches. As a Star Trek game it goes off the rails, failing to live up to what the series is capable of and instead going for the feeling of Generic Sci-Fi Story X.

Dix: The game’s story does reach impressive levels of complete genericness, with Kirk and Spock venturing through several familiar and alien environments to stop the Gorn from conquering the galaxy using a device engineered for something entirely benign that happens to have highly strategic side effects.  The Gorn, a reptilian species from the original Star Trek series, have been re-imagined as ruthless extragalactic conquerors that barely resemble their namesakes and are given no real depth.  Clumsy pacing and uninteresting objectives hinder what already plays like a plot written by someone who has never really seen much Star Trek, besides possibly the most recent movie, and doesn’t much know what to do with any of the material.

Kristine: This is in many ways felt like a rehash of the 2009 Star Trek film, but with Gorn and, for once in Trek’s history, without time travelers. The pacing felt near identical just without that bit where the crew gets to know one another – you know, the part that made the original movie fun. Some of the interactions between Kirk and Spock are decently entertaining but aren’t anything you haven’t seen elsewhere for these two characters. The game frequently makes terrible leaps in logic such as the near glee it seems to take in putting the remaining 10,000 Vulcans at more risk. 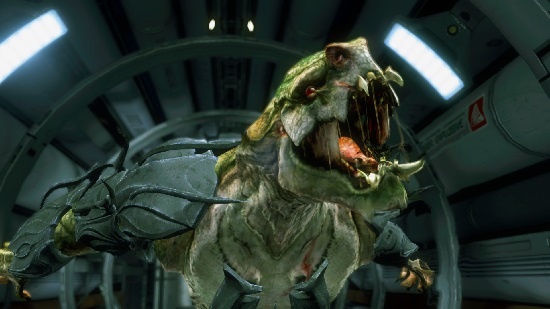 Gorn In Name Only

These leaps of logic extend even further to Trek tech. Half the time the reason why the transporters can’t be used is never mentioned, and the other it’s a bullshit argument, because it’s a technology that makes getting out of tough scenarios too easy, letting Kirk and Spock avoid all of those scenes of action. Not that I wanted easy, but a decent explanation would make the Trekker in me happy. The rest of the Enterprise crew is used to a moderate effect but overall remain in the background. There are a few cute bits with McCoy in particular, toying with the idea of him being the third member of the away team, as was the custom with The Original Series, but mostly this is a Kirk and Spock story.

Dix: As Trek gamers we get used to asking ourselves, “Yes, but is it really Star Trek?”  How can these games get so far off the mark sometimes?  But there were definitely moments, I felt, that fit with the flavor of the Abrams movies – albeit mostly for the wrong reasons.

Kristine: To me Star Trek has always been more cerebral, which makes capturing its essence in a game difficult. Besides the issues I already mentioned with Trek tech I can’t fault the game for hitting the mark it was aiming for. Having now seen Into Darkness, I think they captured the tone of the films perfectly and many of its sequences are taken directly from one film or another. The problem is Abrams’s style is not quite Star Trek in my opinion. If you reskinned the game as an original sci-fi setting I don’t think anyone would notice.

Dix: Most of the time, Star Trek wants to be Uncharted with a cooperative campaign.  The game is a cover shooter at heart, but the controls are fairly rough and make dodging from cover to cover difficult; the AI, meanwhile, isn’t terribly good at making use of cover, which leads to dull encounters.  Kirk and Spock’s arsenal doesn’t help matters much, with no weapon deviating from the standard fare and few encounters requiring more than the default, unlimited ammo phaser pistol with which each character comes equipped.  This weapon, as well as the characters’ tricorders (which works mostly like a poor man’s Detective Vision from Arkham Asylum), can be enhanced with various buffs purchased with experience points, earned by finding and scanning various objects in each level.  This take on collectibles, from Metroid Prime-style scannables to tribbles, is the extent of the game’s exploration component.

Kristine: I was rather fond of Kirk’s repeating phaser feature myself, but many of these upgrades are not as cool as they seem. Sound decoys will fail to attract the enemy every time, and healing or buffing your partner in the middle of a fight is difficult at best and most of the time not worth the extra effort when you can just pick them up when they fall. In order to earn more XP you can achieve special objectives called Commendations, but these basically boil down to, “Don’t kill mind-controlled good guys,” and, “Be sneaky.” Star Trek is no Arkham Asylum or Metal Gear Solid. You will never be sneaky all the way through a section, especially not with those controls.

Dix: The game is at its best when played with a friend in certain segments where Kirk and Spock are given a two-pronged objective, usually involving one character scanning or hacking something while the other shoots at something elsewhere.  These set pieces are not entirely memorable, but coordinating with a friend to bypass them is the most rewarding part of the game. 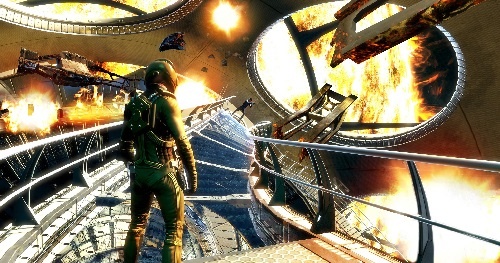 Kirk and Spock spend lots of time in and around exploding things.

Kristine: Agreed though mostly this boils down to a simple minigame in order to hack through doors or giving one another a boost into an air vent. Occasionally, however, Star Trek presents a truly co-op dependent scenario such as one person crossing a canyon filled with enemy Gorn while the other picks them off with a sniper rifle, or as you mentioned, one player solving a hacking minigame while the other provides covering fire. To the credit of the minigames, there are a number of varieties and while they get old over time, they’re not so difficult as to be frustrating.

Dix: I was always glad to reach one of these sequences because they tended to offer the most interesting moments from a gameplay perspective: none of the shooting mechanics are anything we haven’t seen elsewhere, and better, but occasionally I got the impression the cooperative puzzle-solving was at least trying to be something kind of different, if not necessarily new.

Kristine: The puzzles did seem to be borrowed from other games, such as one section that was definitely Portal inspired, but these sections were a welcome change of pace; divvying up tasks and working together was some of the most fun the game has to offer. It’s also rather notable that we could kill Gorn in relative silence but the puzzles were when we communicated the most and when I was most  invested in the game.

Dix: But platforming, when it rears its ugly head, is a messy and frustrating affair, with none of the stickiness of Uncharted.  Kirk and Spock run and jump like they’re constantly not quite sure of what they’re about to do, which is not a productive attitude when the fate of the Federation hangs in the balance and you’re leaping through an exploding starbase.  It’s very easy to miss jumps without having a good sense of why, and since that usually leads to death and reloading, it can get old quick.

On the bright side, the platforming does sometimes offer genuinely funny moments, by virtue of the game’s animations, which range from poor to comically bad.  The most laugh-out-loud moment in Star Trek is undoubtedly the first time you see Spock balance on a narrow beam.

For the World is Hollow and I Have Touched the Sky

Kristine: The graphics aren’t bad, just not exactly good either in this modern age of HD. The character models are serviceable but their animations, including mouth movements during dialogue scenes, are laughable at best.

Being aboard the Enterprise is fun and a great opportunity to explore some more of what the ship looks like, for all the five minutes you’re on a recognizable set like the bridge. The Gorn environments are muddy, dark, and like every other sci-fi alien landscape: completely without any real substance. The coolest setting in my opinion was that of a Federation space station under attack, which managed to combine some classic Trek feel with the reimagining and provide a decent playground. Sadly, besides some of the decent set-ups, that entire sequence could be cut from the game’s story without any ill effect. 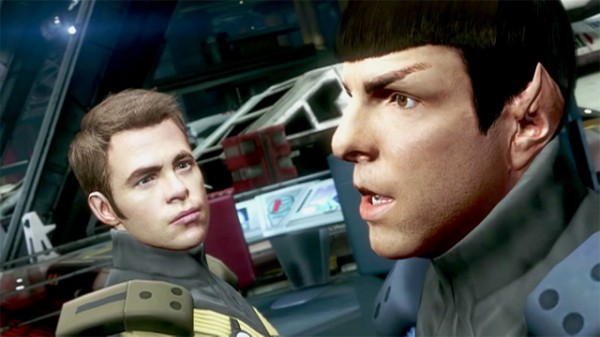 Dix: Sound doesn’t fare too much better.  Though the game brings to bear most of the movie’s cast to voice their characters, and some of the dialogue writing is punchy enough, the delivery often feels wooden.  It’s a microcosm for the game as a whole: the right components without the execution quite coming together.

Regrettably, the end result is a game that disappoints across the board, and is difficult to recommend to even dyed-in-the-wool Star Trek fans.  Only the barest resemblance to the franchise exists here, and nothing has quite the level of execution it needed.  Whatever your thoughts about the current Star Trek movies and how they’ve revitalized the franchise, it’s safe to say that they haven’t brought any appreciable change to Trek gaming.

4 Responses to Star Trek: The Video Game (A Cooperative Review)