Fez is actually two different games. Only one of them is the game you were promised. I like the other game much better.

Of modern indie platformers, there are two general types. One is the type of game where the platforming itself is extremely challenging – the masocore games like Super Meat Boy. These games may have hidden items, collectables, and other secrets, but the primary focus of the game is on platforming difficulty. There is also the cerebral type of indie platformer, such as Braid. In Braid, the physical platforming itself isn’t so difficult, save in a few sections, but the game is full of collectables that are frequently challenging to reach, which require spatial puzzles to solve.

When Fez begins, it is clearly, obviously, a game of the second type. It’s a charming game, but a few years too late to feel revolutionary. The game has a bit of a history: it was in the IGF; it was vaporware; it was in the IGF again. It was picked up as an Xbox Live exclusive. It was controversial. Its creator said some Things. Somewhere in all of that you’ve probably seen a trailer that advertised the game’s core mechanic. Gomez, the game’s main character, comes from a two-dimensional world. But Gomez can turn reality around himself, and see the world from different points of view. When the world has been turned, which happens 90 degrees at a time, it flattens out again. This means that some areas that might be inaccessible from one angle are in reach when the world turns. It’s a 3D world, condensed into a series of 2D spaces.

I think it’s theoretically possible to buy Fez and to only play this side of the game. And if that’s the game you wanted to play, then you’d probably be satisfied, but a little uncertain. As it turns out, the mechanic of turning the world to line blocks up, then jump to them, doesn’t really lend itself to as many brainteasing puzzles as you might think. The order of operations is generally: “How do I get to that place?” Twist, twist. “Oh.” Sometimes a room might throw a wrench in the situation, like a crank that lines blocks up only temporarily, or a pump that allows you to raise and lower toxic water. Whatever the case, you solve the puzzle, line the world up, and grab the collectable: either a large golden cube, or a small cube shard, eight of which are needed to make a full cube. Collect enough of the golden cubes, and you can open doors which lead you to more cubes, and, eventually, the end. Or, an end. 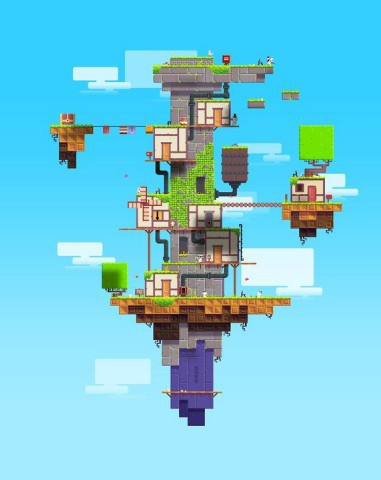 So far I’ve mostly refrained from spoilers, but now I have to use them. If you’re desperately afraid of spoilers, and you enjoy games that are mostly riddles: stop reading, and get this game before I ruin it for you.

Because at some point you’re going to find the other game that’s in Fez. It snuck up on me when I read the Achievements List, and saw something about “Anti-cubes.” Anti-cubes are blue cubes that you have to solve more difficult puzzles for. You may stumble across one or two in the course of playing the standard Fez game. Since they count as regular cubes for the purposes of opening doors, there’s no difference between getting them and the regular cubes, except that the processes for finding Anti-cubes are weirder, and harder. They’ll force you to think outside the box a little.

I walked into a room, and saw a QR code on the wall. “Is that really a QR code?” I thought. “Do I have to scan that, with my phone?” Yes. 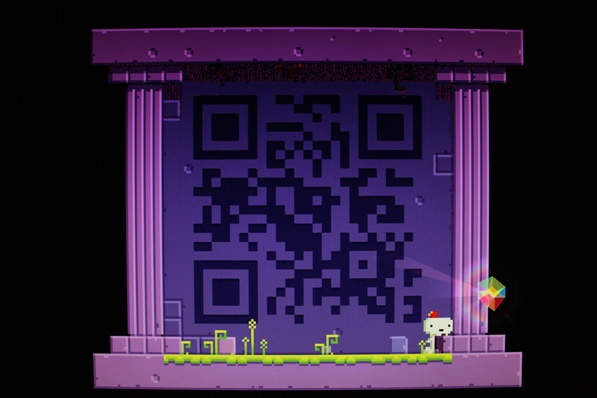 Later, I opened a chest. Inside was something the game called an Artifact: the Writing Cube. Flavor text indicated to me that it was how I could learn to read the letters in the game.

That’s interesting, I thought. Inside this same room, there was a sign, with some of the game’s glyph-like text scrawled on it. I approached it, with the writing cube in my inventory, figuring I’d get a prompt now to read. That didn’t happen. I went in to my inventory, and tried to click the cube, but nothing happened there, either.

I noticed, at the base of the sign, an adorable pixel fox. It was jumping over a sleeping hound, back and forth, over and over.

“That’s cute,” I thought.  And then: “Oh.” First the mind-mannered “oh” from previous puzzles. Then the Red-Letter-Media-styled sigh of deeper, greater understanding. “Ohhhhhhhh.”

I liked the Myst games as a kid. Sure, they’re slow-paced, literally Hypercard slideshows that you click through without much interaction save the world of obtuse pattern-matching puzzles. But the pattern-matching puzzles were some good stuff, if you cared to dig in. I remember in particular the game Riven, which required me to, among other things, learn to count in another language, then do math in base five. The other game that Fez is, is Riven, with pixel art and a little jumping. 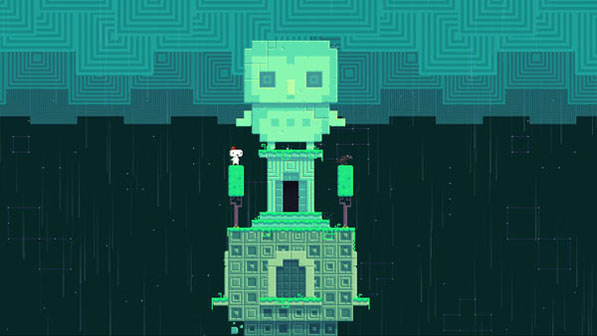 One could treat Fez like an ARG, combing the internet for clues, but this doesn’t strictly seem to be necessary and would ruin the greatest moments of discovery that it has to offer. I did find one useful tidbit, before swearing off any remaining spoilers, which is that in a NewGame+ — after seeing the regular ending — there’s an input code which allows a super-jump. This allows a player to skip most of the platforming challenges. This is fine, because all those challenges are from the first game I was talking about, the one that I saw in the trailers that turned out to be only sort of okay.

Fez begins in a simple world of two dimensions. The people of the world speak of three dimensions as heresy. They deny the existence of “The Devil Square,” that which is also called the cube. However, a mentor shows you the ways of the third dimension. He provides for you a guide, a little Navi-like character who floats around Gomez’s head. The guide isn’t terribly helpful when it comes to the game’s deeper puzzles, but will happily chirp at you to explain the turning of valves and the opening of chests.

The guide is depicted, not as a cube, but, it seems, as a tesseract: a fourth-dimensional solid. 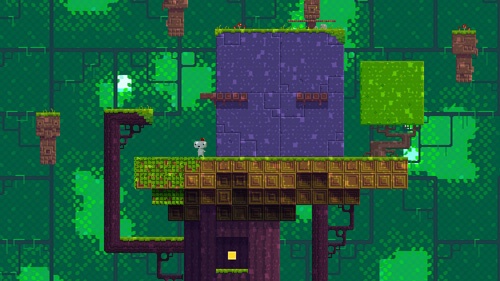 But my Lord has shewn me the intestines of all my countrymen in the Land of Two Dimensions by taking me with him into the Land of Three. What therefore more easy than now to take his servant on a second journey into the blessed region of the Fourth Dimension, where I shall look down with him once more upon this land of Three Dimensions, and see the inside of every three- dimensioned house, the secrets of the solid earth, the treasures of the mines in Spaceland, and the intestines of every solid living creature, even of the noble and adorable Spheres.

Or if it indeed be so, that this other Space is really Thoughtland, then take me to that blessed Region where I in Thought shall see the insides of all solid things.

While it may seem like Fez is not cohesive, it works as a playable literary allusion. There are two dimensions, in Fez, for traversing. There is a Third dimension in Fez, which is the dimension used to solve its spatial puzzles. Then there is the Fourth dimension, that dimension of Thoughtland, and once you reach that dimension the dimensions below it are diminished in their importance.

That dimension, should you make it there, is the one worth traveling.

As long as we put up with it