Despite no family history, my blood pressure is apparently higher than Cheech & Chong. One specialist, upon remarking that I was maybe a millimeter of mercury – maybe less – from stroking out right there on her table, opined that perhaps I am “carrying my stress wrong.”

Games like Impire, which causes headaches, do little to ease my mind.

I’ve always intended (though never actually gotten around) to writing about it for this site, but Dungeon Keeper 2 is one of my very favorite games of ever. I’m a little more neutral on the original, but the sequel, man, I love that with all my heart. Alas, it’s one of the least future-proof games I’ve ever encountered; even the GOG optimization is profoundly weak. Bullfrog is long since out of business and despite a few sort of halfhearted attempts to mimic the style, we’ve never seen a game like it.

The two attempts to recreate the feel of Dungeon Keeper 2 that leap to mind are Elixir’s Evil Genius (which even the kindest had to admit was irretrievably flawed) and Realmforge’s Dungeons (which was execrable). For some reason no one has been able to match its magic, despite the fact that the Dungeon Keeper formula is pretty basic. It is, basically, a real-time strategy with a few twists.

So along comes Impire, right on the heels of A Game of Dwarves, both budget titles published by Paradox Interactive; both real-time diggers with a sense of humor, both utterly unable to capture what made Dungeon Keeper 2 such a great game. Of the two, Impire is better made and comes closer, but that’s not saying much.

I’d Rather Take It than Play Most of Their Games

Typically, when gamers see this during a credits screen

they tend to shrivel up a little bit. How Cyanide stays in business when dozens of far better studios die on the vine is beyond me. The Paris- and Montreal-based company has never created a game that’s remotely good, and is responsible for some – like A Game of Thrones (not to be confused with that of Dwarves) – that are veritable crimes against the medium. That Impire is far and away their best game says something pretty damning.

Impire is a management game in which you dig out dungeons, populate them with ferocious beasts, manage economies and upgrades, and pummel your foes, both do-gooder heroes and competing evil overlords. So far so good, right? That’s Dungeon Keeper exactly. In Impire, a sorcerer desperate to earn his evil chops summons the demon Baal-Abaddon to serve his bidding. A screw-up during the incantation transforms Baal; where once had towered a fifteen-foot, flame-wreathed nightmare now stands a midget imp with an attitude problem, and hilarity ensues.

No, really! It does! Impire is actually pretty funny, and it knows that the whole dungeon-keeping concept depends on the silliness of evil. Baal was a demon and now he’s an imp. His summoner is evil, but so incompetent that he can’t make a name for himself. The dialogue and villains are chuckleworthy. 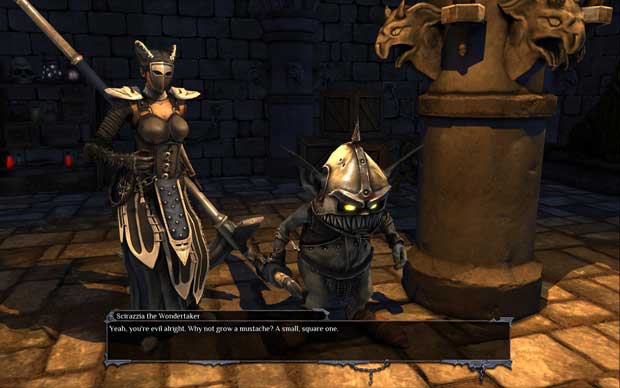 Moreover, what Impire innovates, it innovates well. You summon monsters directly to your dungeon rather than luring them based on the amenities you offer, and then have the opportunity to assign them to squads of four. Squads stick together, patrolling the dungeon and leveling as a unit, which makes planning a lot easier. And you can send squads out to the overworld on raids, to complete objectives, gather treasure, or just cause chaos. Beyond unit management, Impire offers a large selection of rooms to construct, along with traps and dungeon improvements, plus a significant upgrade tree that all but guarantees your unique play style can be accommodated by the game.

In fact, if it weren’t for Impire’s crippling fundamental issues, I’d be recommending it heartily. It’s funny, looks pretty good, runs fine, and adds enough uniqueness to the world of Dungeon Keeper clones that you can’t fully dismiss it as a Dungeon Keeper clone. Sadly Cyanide took its potentially fun game and ruined it through nothing more than its own characteristically mind-boggling ineptitude.

The first warning you get that something’s not right with Impire is the game menu. It makes no sense, jumbling beta multiplayer stuff in with single-player settings, scattering buttons hither and yon, and really going out of its way to be unnecessarily confusing. It took me a good five minutes to figure out for sure that I was actually starting the single player campaign. The menu of Impire is like trying to turn on the television at a mediaphile friend’s house – forty-six remotes, nine inputs, seven devices, and then it’s all in Spanish.

Once in-game, Impire only has two flaws, but they’re doozies: interface and information flow. 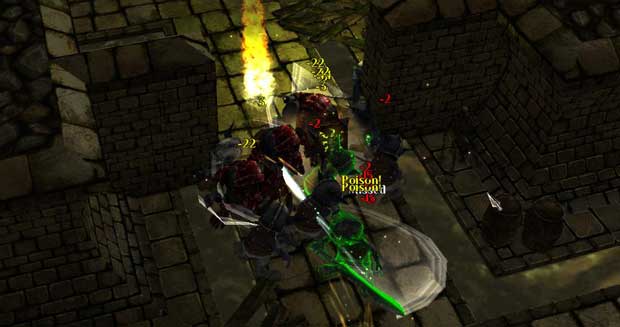 This is combat. If you can tell what’s going on, you’re better than me. I think poison is involved somehow. In case you can’t see, there are also six instances of “-22” (in yellow), three instances of “-2” (in red), “Missed” and something I can’t quite make out. Plus that green thing, whatever that is.

Tooltip-sparse iconic buttons are one thing, but requiring the player to move amongst several different menus to view or accomplish stuff that should be onscreen at all times is unforgivable. Want to review your squads? Gotta go to the Squads Menu. Want to hire new creatures? Gotta go to the Management Menu, or right-click on a monster-producing room… which is often miles away from where you’re looking. Want to build a room or hallway? Back to the Management Menu, which runs in real time but which doesn’t allow you to give any orders other than building. The radial right-click context menus do help with some of the mess, but all in all gameplay of Impire is unnecessarily complex because you don’t have the front and center access to tools and information you need. It’s unintuitive and frustrating, because the interface isn’t hard, it’s just completely obtuse.

Not to mention that some commands simply don’t exist: there’s no way to queue instructions for units or squads, for example. This would be okay if your creatures were better at managing their own daily lives, like the creatures of Dungeon Keeper 2 were. In that game, hungry creatures went to eat on their own. Bored creatures entertained themselves on their own. Newcomers automatically established lairs near creatures they had an affinity for. Workers of all kinds gravitated toward the rooms where they liked to work. The key was building an efficient dungeon, so food or entertainment or lodging were never too far away. You weren’t responsible for micromanaging, you were responsible for making it possible for your creatures to micromanage themselves. 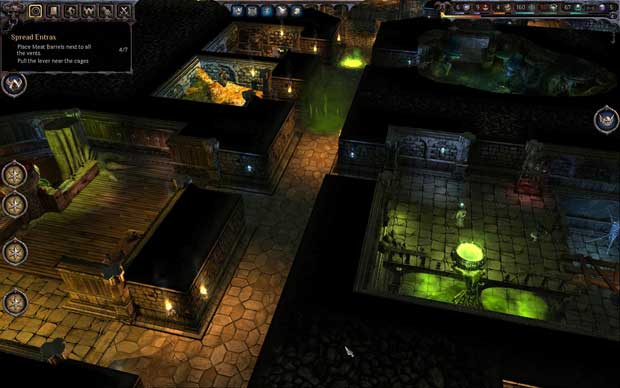 In Impire, you have to tell your creatures to eat. You have to tell them to train. You have to tell them to do everything, and you can only tell them one thing at a time, so it becomes an endless exercise of sending a squad to the kitchen for a meal, then telling it to work out in the training room, then dispatching it on patrol, then teleporting it to the location of invading heroes… and, of course, manually upgrading their equipment on a creature-by-creature basis. The result is that you’re constantly doing little-picture busywork when you should be focusing on the big picture.

Your Dungeon is Full of Yoghurt

The first several missions of Impire act as an hours-long tutorial. Enough control is released early on that this isn’t an irritant, but what Impire doesn’t tell you is as voluminous as what it does. Icons pop up all over the screen, floating nauseatingly as you scroll. Icons for rooms, icons for squads, icons for Baal, icons for objectives. Hovering over them doesn’t reveal what they are, so start memorizing. The narrator will go into agonizing detail about things like the upgrade tree and foe tags without ever actually telling you how to use them, then punish you for looking at a menu screen because the game’s in real time no matter whether you’re in an interface that allows direct control or not.

Other times it’ll pop in with a completely incongruous, never-explained remark like “new ladders have been added to your dungeon.”

Squad One advances on an Overworld raiding target.

What the crap does that mean?

A special pet peeve of mine with games like this has to do with the digging interface, or lack thereof. Admittedly, Dungeon Keeper 2 was from a simpler time; a tile-based, isometric, one-level view was the best the technology could do, and as such it was pretty logical where you could and couldn’t dig. Connecting rooms was a matter of smashing a hole in the wall and building a corridor. Not so in Impire, where rooms come in pre-fab shapes, with pre-fab entrances. Not so in Impire, where it refuses to allow you to dig tunnels in earth that appears to be perfectly diggable. Not so in Impire, a game that doesn’t even allow you to connect rooms to each other. I guess it’s a toss-up between the gross limitations of Impire’s digging and the unmanageable lunacy of A Game of Dwarves, though I can’t help but think that there’s a simple golden mean in there somewhere. Oh wait! There is! It’s called Dungeon Fucking Keeper 2, which got it right in 1999.

And So We Wait

If Impire were a flat-out bad game I’d be much happier, because that’d be easier. But it’s not. It’s a very well-meaning game, one that’s almost fun, but for itself. When Dungeons came out in 2011, that game was easy to hate. It was terrible. Everything about it was bad. Impire is not the same way at all; it’s not terrible and almost nothing about it is bad. But the tiny handful of things that are sabotage the rest of the experience almost beyond repair. 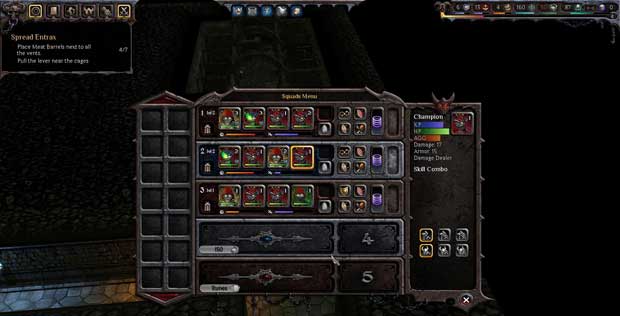 In general I’d say if you’re a Dungeon Keeper obsessive who’s willing to withstand a lot of clumsiness in game design, you might be able to enjoy Impire. As for me… I don’t see myself spending a lot of time with it. It raises my blood pressure. It makes me mad and frustrated, because here’s a game with tons of potential that capitalizes on none of it, and in so doing de-funs itself. Honestly I don’t know if I’ve ever played a game that actually excises its own fun before, but Impire manages. I’d like to play more. I’d like for Impire to be my holdover, my evening go-to until Bioshock Infinite comes out. And I’ll keep trying, at least for a little while, but in my high-pressure heart I don’t think its chances are good.

Thus we dungeoneers who so enjoy their keeping must wait again for a modern take on the old classic. At this point all our hopes are pinned on War for the Overworld, a recent Kickstarter success that’s made no secret of its roots… the team behind it are actively trying to recreate Dungeon Keeper (not Dungeon Keeper 2, but I’ll take what I can get), balls to bones. And good on them, I say. I backed War for the Overworld and I really hope it’s excellent, though a complex game from an untried team, when so many veterans have failed, is a scary proposition.

When the inevitable Steam sale knocks it down to 99% off, Impire will be worth it. But at $19.99, you’re better off leaving that gold in your treasure room.

Do a great impression of Steerpike – even the ears – at Steerpike@tap-repeatedly.com.