10/24/2011|Amanda "AJ" Lange|Editorials19
Home » Home » Editorials » On Cosplay and Privilege
It’s that time of year – the spooky time of year – when people’s thoughts are occupied with monster movies, horror games, and dress-up.  Halloween!
I accidentally stumbled in to a discussion this weekend with a friend about a segment of this annual topic: the dreaded “women’s costume.”  First, some background: I was in line at Party City the other day, shopping for what I intended to wear, and I saw the woman in front of me bought the costume that is pictured up in the header, on the far right.  That’s right: Sexy Mario.

Not Sexy Princess Peach. You’d be expecting that, of course.  If you’re interested in that, you’ll find all sorts of varieties with a quick Google!  But there’s also Sexy Mario, and Sexy Luigi, costumes designed for women to wear, which include miniskirts and fake mustaches. 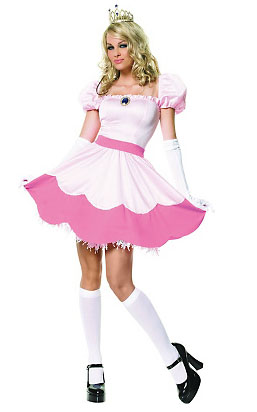 Now what my (male) friend said later, related to this, which accidentally caught the brunt of my feminist ire, was the following: “I really like cosplay. But a person should only wear a costume that’s size-appropriate.”…Wait, hold the phone here. What exactly does “size-appropriate” mean? Specifically, he said, the costume-wearer needs to have the body type of the character that they’re portraying.

Now my friend was quick to mention that this is not a double standard.  After all, he’d expect a man to wear a costume appropriate for his shape, too.  But that’s the reason I’m titling this soapbox “Cosplay and Privilege,” because, this is one area where a man may just not recognize that he is, in fact, privileged, compared to a woman who wants to cosplay.

I have nothing against game characters wearing sexy outfits. I want to put that on the table right now, because there’s so many articles beating the drum about this everywhere, and I don’t want to add to the din.  I like characters that look pretty and cool, even if their outfits are improbable.

But where it comes to someone trying to make and wear those outfits, especially around Halloween: I say, live and let live. I think there’s a line you can draw where a person may just have bad hygiene, or be in something offensively skimpy, and depending on the outfit that line might be drawn at any person’s size. But I also think that it’s a fun, harmless fantasy to dress up, and people are entitled to try on the outfit that they like.

The game industry has traditionally been okay with depicting a variety of different male body types. In lots of different video game fandoms, there is at least one fat guy. Sure, it may not be the big hero; it may be a comedy character, like Rufus from Street Fighter, or like Donut Drake. But these characters exist. And to be slightly larger in certain male roles is, if you’ll pardon the pun, not too much of a stretch. 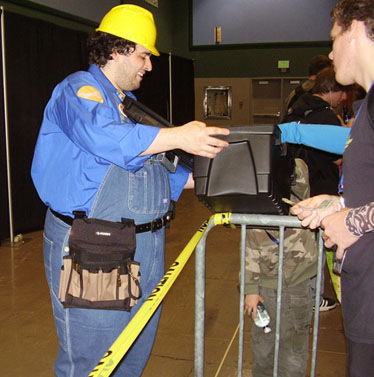 On the other hand, there’s a very small variety of female body types allowed for characters in games.  The most perennially popular of course is “thin, with large breasts.” Occasionally we also see “thin and girlish:” that is, thin with small breasts, for the waif-type characters.
I suppose there are some options for fat women, if you must be “size-appropriate.”  I can think of two from Disney: Ursula and the Queen of Hearts. Now go ahead and scroll back up to my header.  Yup, center-row. You know, I really don’t hear anyone complaining, either. And look at how skinny you should be if you’d like to portray a fat Italian plumber! 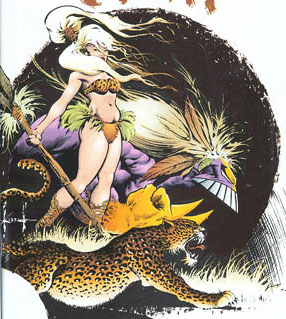 Now it may surprise you to know this, but these are not the only sizes that women come in. It is possible to be neither fat, nor thin, but somewhere in the middle.  It’s possible to be naturally curvaceous, but with thick legs.  It’s possible to be pear-shaped.  It’s possible to be basically curvy, but have a bit of a round tummy.  If you fall in to that last category, like I did when I was younger and thinner, there is exactly one female character in all of geek media that I can think of that you can dress up as “appropriately.” Thank you, Sam Kieth. It’s a start. Of course the only cosplay I can find of Julie, the world’s only comics heroine with a belly, is done by a girl with a flat belly. I’m sure I’m the first to complain.

I’m just not sure that male geeks get this: that all the cool female characters out there generally look the same.  They all have a very small variety of body types, while it’s acceptable for male characters to have a wider variety of body types.  And that when you say, people should only cosplay something that’s “an appropriate shape,” you’re shutting out a lot of women from a lot of options.

It’s a different situation if someone is a company spokesmodel: a professional cosplayer that is designed to advertise a product.  You might call them “booth babes.” It’s understood that they’re there to wear very accurate outfits, look pretty, and draw attention to the booth. There are a variety of opinions about the appropriateness of this practice, but all I’m getting at is, if you’re hiring someone to portray someone for your advertising, then yes, she (or he) should look the part.  This is simply not a category that contains every woman. Some women just want to dress up: for fun. 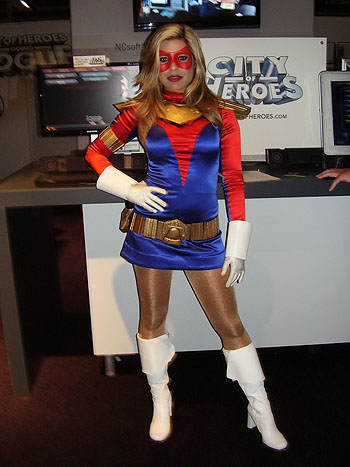 This is one reason why I wince whenever I see the larger game news sites post a “cosplay gallery.” Some costumes are so well-engineered that you just have to admire the craftsmanship, and that is worth commenting on. But a lot of the time, these galleries are just a thin excuse to ogle women. And if for some reason the woman’s body isn’t perfect, the comments will go to town explaining how she’s ugly and why. (This sets aside the other reason I wince, which is that costume gallery pictures and videos are neither game commentary nor game news, and so they aren’t really all that interesting to someone who wasn’t at said costuming event, but that’s a side note.)
This is a symptom of a larger problem in geekdom. Where it’s easy enough for a man to fit in, women in geekdom are bound to feel ostracized if they don’t also live up to a certain standard for looks.  Women game writers, developers, producers, etc, are worth less to much of the hardcore game audience if they’re not attractive, and, if they are, they can be harassed endlessly for that too. There’s a variety of women of all ages, shapes and sizes in the world, and if they want to be geeks and gamers, they should be allowed in to the community. And Halloween is that time when we can try on different roles, of different sizes, and find the fun in escapism and imagination.
So Happy Halloween!  What are you dressing up as? I’m going as “I’m-probably-too-chubby-to-be-Batwoman-but,-you-know-what,-if-you-really-think-that,-screw-you.”
(Photo credits: some costumes taken from Party City web site; cosplay photos taken at PAX in 2009.)

19 Responses to On Cosplay and Privilege