My love for competitive fighting games started in the early 1990’s, with the arcade debut of Street Fighter II. Back then, I was in middle school. I liked the character of Chun Li, a character who was a woman fighting in an otherwise-male cast, claiming to be the Strongest Woman in the World as she flashed across the stage with her high speed kicks and jumps. She was a popular character choice for guys I knew, too, but not because she was an inspiration. Because if you did the Spinning Bird Kick, you could, like, totally see her panties, for a whole two frames.

At PAX East I got a chance to try out a game called Girl Fight. Girl Fight is a fighting game that makes the fleeting experience of seeing Chun Li’s panties in to the entire purpose of the game. This game is reminiscent of Tekken or Dead or Alive, with sidestepping, grab and block assigned to buttons, and very few projectile-style moves. Unlike Tekken, however, Girl Fight stays true to its name, and uses female fighters only.

What this really means is that, instead of half the cast being improbably proportioned women in impractical combat outfits, like so: 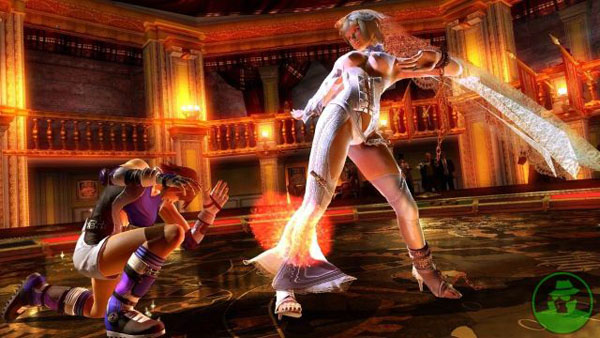 the entire cast is made up of improbably proportioned women in impractical combat outfits, like so: 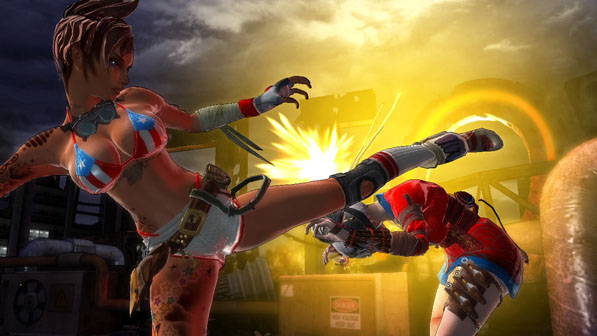 Some were shocked by Girl Fight when it showed up at the Game Developers Conference earlier this year. Others were merely annoyed by it. I was not shocked or bothered when I finally got to play it. I thought it was okay, acceptable, even kind of cool.

Girl Fight is, basically, using a little sexuality to build up interest in what would otherwise be a fairly run-of-the-mill 2.5D fighter. The game, in play, does have a little more depth than it appears to initially. Each character has a set of different customized combos, which give her move list some variety, but all share from the same list of special moves. The special moves, which are like psychic powers, are selected prior to battle, doing things like setting your character on fire or draining health from her opponent with a blown kiss.

It was a fun little diversion for a few minutes, though people seemed reluctant to take me on in the game after a while. I like to think that’s because I was doing awesome at it, but, it’s probably more that passersby are ambivalent to unknown fighting games. I think my favorite character from the prepared group was the cyborg, who is a bit of a heavyweight. But more are going to be added to the mix before the game is complete. 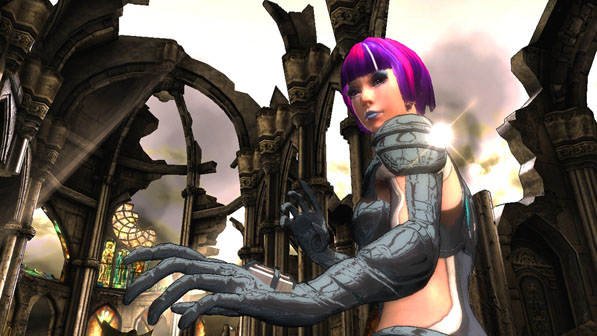 One screen over, my eye was drawn to a slightly stranger game: Deadliest Warrior: Ancient Combat. The game, which is a revamp of a previously-smaller downloadable title, is based on the Spike TV “reality” series of the same name. Perhaps you’ve seen it: using some dubious methodology, battles between ancient heroes of the past are imagined and virtually enacted. The show aims to solve very important historical conundrums, such as “Who would win in a fight between Sun Tzu and Vlad the Impaler?” The fighting game essentially takes some of these conveniently public-domain figures and makes them duke it out. 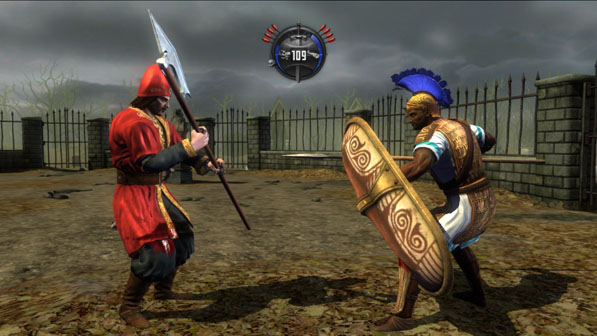 This game doesn’t seem to be trying to appeal to the male gaze: the only selectable woman, Joan of Arc, is wearing totally practical clothing. So just so no one gets bored, the game is bathed in copious amounts of blood. The “zombie mode,” which was turned on by default, allows a Deadly Warrior to fight minus any number of his limbs, or even his head. The winner is the first character to remove all limbs from the opposition and bisect his torso. Mostly, it’s all over once you lose your arms since you are no longer able to wield a weapon. But your head is mere collateral damage, not really necessary for any kind of success. Frequently a combat might come down to one headless individual, waving his sword wildly, doing battle against a half-torso hopping around on one remaining leg. Both combatants become so slick with blood you can hardly see what they were originally wearing. 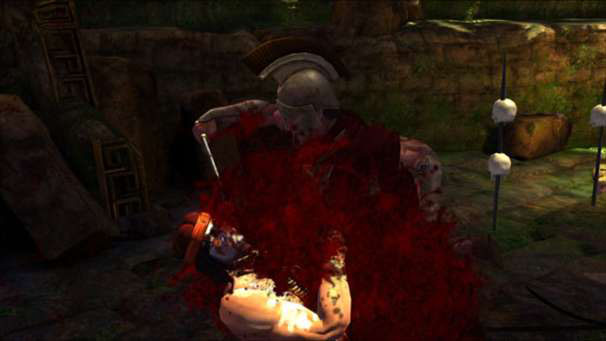 It’s exactly as silly as it sounds. And strangely compelling, and eye-catching, in the way that Time Killers was temporarily more interesting to me in the arcade than Mortal Kombat was. Time Killers was an old 90’s fighter where the characters used weapons. They could still fight without their arms, or go for a direct decapitation to finish opponents off instantly. Mortal Kombat was the better game here, but there is something magical especially to someone young about the allure of seeing something even more exotic and horrific in every new game iteration. Maybe you’ll get to see someone’s intestines spilled out all over an arena floor. Maybe you’ll even see some panties, or part of a boob?

In the original Killer Instinct, a Rare fighter released for the arcades and published by family-friendly Nintendo, the only female character was an assassin named B. Orchid. She had a finishing move where she pulled open her top, flashing the opposing fighter. This killed them for some reason. The implication is that the opponent saw something so mind-blowing he died happy, but I like to pretend that it was something horrific instead. Perhaps an alien mind worm, radiating deadly psychic rays, was nestled into Orchid’s cleavage. Or, maybe the opposition was just treated to the unsettling sight of one horrible, fused, torpedo-like uniboob. Either way, when I was a teenager, this was the ugliest character, with the dumbest finisher. It was the first time in a fighting game I couldn’t bear to “main” the female character. My favorite choice here was the robotic knight, Fulgore. That was 1994.

Really, there’s something deeply strange about the way American culture condones even extreme violence, while making sexuality taboo. You almost don’t notice it until you see a game like Girl Fight, where women are all fighting in precariously poised outfits. That sort of hand-to-hand contact is fine: they can grab each other, throw, and wrestle. But if they were to, say, make out a little bit, like it seems two combatants are about to do in the Girl Fight cover art, all bets would be off.

On the Daily Show last year, Jon Stewart made the comment that while it’s perfectly acceptable for the women in Mortal Kombat to rip each other to shreds, a “nip-slip” would be right out. And he’s close to correct. Actually, Mortal Kombat, being an M-rated title, can at least step a little closer to the acceptable sexuality line, but it doesn’t really cross it. Mileena is probably the most overtly sexual character, making creepy yum-yum noises, and feeling herself up after she devours the heads of her opponents. The first time I performed her finisher, it squicked me out… and I very rarely am squicked out these days. Just watching a video of this isn’t quite the same as being complicit in it, but maybe you’ll get the idea.

Because outright sexual displays are taboo in this kind of entertainment, video games, and fighting games in particular, often use extreme violence against and perpetuated by women as a surrogate for sex. If that sentence sounds wrong, and weird to you: yeah, this situation is really kind of wrong and weird. Violence is arousing, from a psychological standpoint, meaning it pushes some if not all of the same buttons as sex. It’s also taboo, though not as taboo as sex, meaning it can be depicted acceptably in American entertainment. That combination leads to a lot of situations where violence is made intimate, as a sort of sexual surrogate. You can’t eat someone out in Mortal Kombat. But you can eat someone’s head. 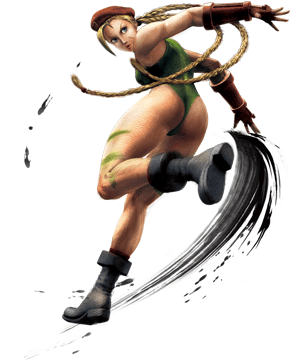 I discuss these women, their moves, and their fashion sense not to slut-shame them. The conversation about whether any fighting game outfit is somehow “realistic” has really started to bore me overall. While I have a little fun at the top of the article referring to fighting game women as impractical and improbable, the truth is that it’s just an observation. It’s not something that pisses me off. Even Orchid feels run-of-the-mill to me these days, despite crossing a line for me back-when.

A resource like Women Fighters in Reasonable Armor, a much-lauded Tumblr, is a nice inspiration for fantasy artists going for a certain style. But I’m displeased with, and, really, bored by, the complaints and accusations that “reasonable armor” is the only armor that women fighters ought to be allowed to wear. There is absolutely a time and place for the “slut plate,” the “battle bikini,” the “combat thong.” Cammy is absolutely rocking it.

This week sees the release, to PSN and XBox Live, of a little game called Skullgirls. I haven’t gotten my hands on this one, yet, but to all accounts it’s a well-balanced tournament-ready quirky little 2D fighter. It’s also another all-woman show, and just as heavy on the fanservice as any other title in the above mix. Quite cute, really: fun, colorful character designs; it just makes me happy to look at this. 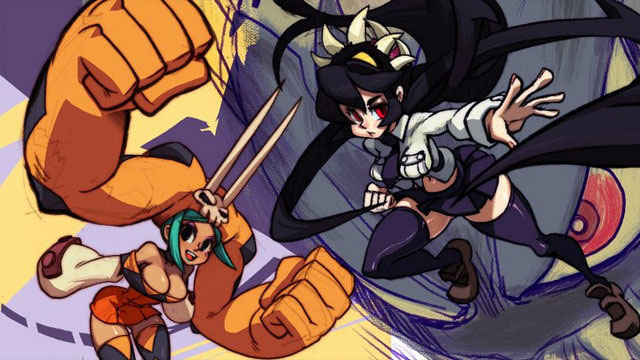 Yet this is also a community where a tournament-level player said, now-famously, “sexual harassment is part of the culture.” Where does this sexual harassment really start? I just can’t get pissed off about Girl Fight and I think I even enjoyed it. But does the constant depiction of the women in fighting games as sexual objects make this real-world harassment seem more acceptable?

As a little girl, I looked up to Chun Li. But the boys just wanted to look up her skirt. Can we have both?

6 Responses to Kiss Me, Kill Me