Due to circumstances outside of my control, I was away from the internet and most games this weekend (other than my trusty old DS Lite). While I was sitting in an airport terminal, waiting for our flight to board, a copy of the New York Times – Dead Tree Edition – happened its way across my lap. On the front page of the Business section, I saw an article about Slim Jim’s marketing strategy. It was presented without irony.

I implore you to read the entire thing, since it’s all painful. There’s an associated commercial on YouTube, but I’d rather not link it myself since it’s not so popular so far and I don’t really want to give Slim Jim the hits and satisfaction. But please do read the article.

Okay. I know. There’s nothing new there. And yet there’s so much to unpack here. It’s a horrible, tangled web of cultural assumptions about manhood, about food, and of course about video games. 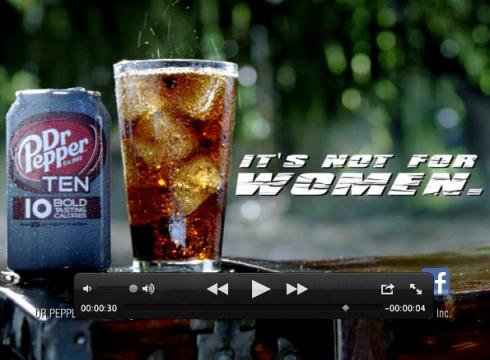 Our culture has some weirdly gendered notions about food. Just for starters: some foods are for women and some are for men. Chocolate, diet soda = coded female; beef, beer = coded male. It’s okay for women to want “man foods,” like  a drippy Carl’s Jr. burger, as long as they are attractive women. Of course a fat woman eating manly food (or any food, or doing anything) is disgusting. Cosmetics are marketed to women as an alternative to fatty food (described as “whipped, delicious”). If marketers decide to sell diet soda to men for a change, they have to emphasize that women are not allowed to drink that particular diet soda, lest men who drink it feel “girly” and devalued.

I actually eat a lot of dried meat, though not Slim Jim. I’m anemic, like lots of women, and, I’m on a low-carb diet, like lots of women. Those two factors make beef jerky a reasonable grab-and-go snack choice for me, giving me nutrients I need without crap I don’t. But beef jerky is not marketed to me. It is “man food.”

Well, wait… it’s not man food. It’s boy food, because, as a man gets older, his “snacking regimen diversifies.” Now it seems to me that one good way to sell more jerky would be to open up the jerky market. Married men, and even women, might enjoy jerky: the portability, the flavor, the health benefits (!). But this is why I’m obviously not a marketer. The trick isn’t to say it’s okay for men and women to enjoy jerky. The trick is to explain to men why they should remain boys for longer so they can eat more jerky.

Enter video games! “That bastion of boyhood.” Video games are certainly not for women in the world of Slim Jim (or even in this section of the Times). But, like Slim Jim, they are not even for men, who have dirty, filthy grown-up lives and responsbilities! And video games are about “avoiding the grown up thing.” Dead Space 3: ’cause it’s for kids! I mean, obviously not kids – it’s M-rated and we don’t want to actually market to kids – let me backpedal that – it’s for “bros”! They need their “brolectrolytes”! And EA is more than okay with this! “It’s good for the game and good for the brand,” says author David Vinjamuri. Someone who disagreed could apparently not be found by the Times before print deadline.

I mean, I disagree, obviously. That put me in my angry place. But I’m just a consumer.

So, like I said, this is old hat. This is the same mentality that causes booth babe galleries, the Spike TV game awards coverage, and other circular-logic poison that keeps shoving video games into the cultural ghetto. And I am so exhausted by it, and this article is a perfect little example of how this treatment of the medium can be totally taken for granted as part of the video game culture conversation.

I don’t expect anything from Slim Jim. Slim Jim doesn’t want my business. But EA – and the New York Times – should try to do better.

17 Responses to This Shrivels My Game Sack