While the rest of the T-R silo dwellers are wandering the wastelands of Fallout 3, painstakingly making their way back to a bloodstain in Demon’s Souls or negotiating the jump mechanics of Portal I decided to go retro with Cranberry Production’s new point-and-click adventure Black Mirror II, the sequel to the reasonably well-received Black Mirror (well, except for the voice work of the main character).

Taking place 12 years after the events of Black Mirror, we meet Darren Michaels, a snarky 20-something Boston college student summering in the sleepy, little backwater of Biddeford, Maine. There he meets the lovely and soft-spoken Angelina Morgan, a British grad student working on her thesis. They’re instantly smitten with each other; however, Darren’s lecherous boss is also interested in Angelina and that could be problematic. One afternoon, Darren notices a mysterious man who appears to be following Angelina around town and takes it upon himself to find out why. Eventually, Darren will find himself in Willow Creek where the “Gordon Curse” continues… 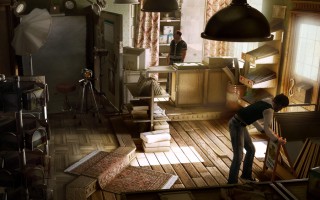 I’ve played long enough to make it to Chapter 3 and I can definitely state that I’ve been enjoying myself. I couldn’t tell you how long it’s taken to get to this point, but I can tell you that during one play session I sat down around 3-ish to play a quick hour. When I finally stopped, I discovered I’d just spent 4+ hours in Biddeford gathering clues. The bending of time is always a good thing. Like its predecessor, Black Mirror II’s visuals are extremely detailed and drop-dead gorgeous 2D.  Cloud formations scud across the sky (don’t look too closely or you’ll realize that same cloud floated by just a minute ago), Darren’s coat gets wet in all the correct places during a sudden downpour and water or glass reflect appropriately. Once the notoriety of the murders wore off, Willow Creek did not fare well in the ensuing years, yet the decay of the village is beautifully rendered. When characters speak in Black Mirror II their movements appear natural and gestures reinforce their conversation; unlike some other adventures I’ve attempted to play recently, there’s none of that distractingly odd fidgeting that bears no relation to what’s happening on-screen that some developers have inflicted on gamers to mimic humans talking to one another.

While we’re on the subject of talking (nice segue, wasn’t it?), Black Mirror II doesn’t suffer nearly as much from mediocre voice work as Black Mirror. The actor voicing Darren does a credible Boston accent, but I suspect he’s not a native English speaker based on the pronunciation of some words. Don’t get me wrong, in this case it’s not a deal-breaker but it can be jarring. One of the amusing things about Darren is that he’s yet to learn the nuance of the “did I think that or say that out loud?” mechanic and frequently has some rather nasty things to say to the people around him. The other voice actors’ accents don’t necessarily fare as well, most particularly those actors portraying the villagers in Willow Creek; however, they act their parts well. I did have issues with the ambient sounds and background music cranked up so high as to drown out some characters – trying to hear Darren describe things simply wasn’t possible while his boss coughed up a lung in the background. Even after adjusting the music and background sounds to acceptable levels, it’s nigh-on impossible to hear Angelina speak (sub-titles to the rescue). The sound engineer responsible for audio balancing (or lack thereof) needs a swift kick.

I’ve not run into any puzzling that’s left me scouring the ‘net for a solution, yet. I have hit a couple of roadblocks due to not locating specific items, but that’s because I chose to pixel-hunt the old-fashioned way and neglected to make use of the “highlight all hot spots” feature. Once I added that to my initial visual sweep of an area, I’ve not had any more issues. As with Black Mirror before it, Black Mirror II is very conversation and organic-to-the-story inventory puzzle heavy. If you prefer your adventure games with less talking, the merest hint of a story and more brain teaser type puzzle-solving, then this probably isn’t the game for you.

There’s a demo; however, it’s in German. You won’t know what’s going on, but you’ll definitely be able to complete the first puzzle without any difficulty.

Black Mirror II is available from Lace Mamba Games for the paltry sum of £19.99 (download) / £29.99 (boxed) or Interact for a mere US$34.95. As of this writing, I’ve not heard of any plans to put it on actual shelves in North America.

It’s entirely possible I could finish this and complete a full-on review, unless I get distrac… SQUIRREL!

Update: Bastards! Forcing players to re-run a sewer maze, while being chased?! Seriously, people? In other news, the actor accents got better and the audio balance is still crap. Carry on.

3 Responses to The Mirror Crack’d