About five years ago, on the message board 4chan, a Japanese artist posted a charming but strange concept illustration. The picture depicted five girls, envisioned as the potential love interests in a Japanese-style visual romance novel. So far, so ordinary, but there’s a twist: all of the young women had a unique disability. One was blind, one deaf. One had no legs, another, no arms. To round out the cast was a burn victim with half of her body scarred from fire.

It takes a special kind of indie developer to look at that illustration and think: yes, we are making that game. The developer who gelled around this idea is called Four Leaf Studios. The game is called Katawa Shoujo.

The name translates roughly to “Disability Girls,” but apparently there’s some controversy over the translation as the connotation of “Katawa” is more negative than this would imply. It’s more or less “Cripple Girls.” Given this, and the fact that this project originated on 4chan, one would be ready to assume the worst: a pornographic game about taking advantage of girls who can’t fight back. 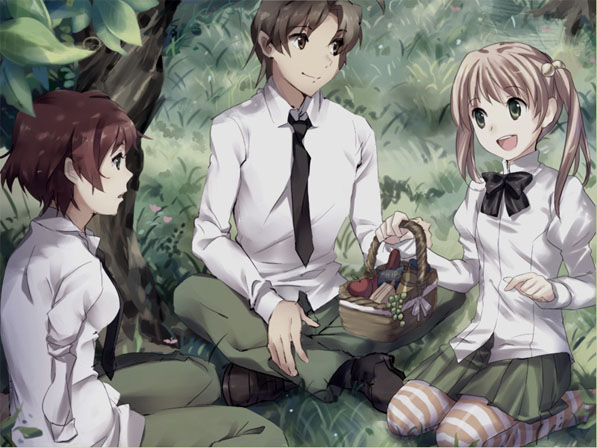 The game takes place in a school for physically disabled students. The protagonist is no exception to the rule; he was transferred to the school after a heart attack at a very young age. He is discovered to have arrhythmia, a heart defect that requires him to take daily medication, and could interfere with his love life and school work in lots of negative ways. The game follows the story of his transfer, and his conversations with the other students that lead him to learning more about living life with a disability.

If you’re sold on this strange premise, keep in mind this isn’t really a game in the traditional sense. It’s a visual novel, and though it’s made by an international group it’s very much in the Japanese style. Mostly, you read, look at pictures, and listen to music. Occasionally, you’ll be given a choice to click on that can cause different branching events. 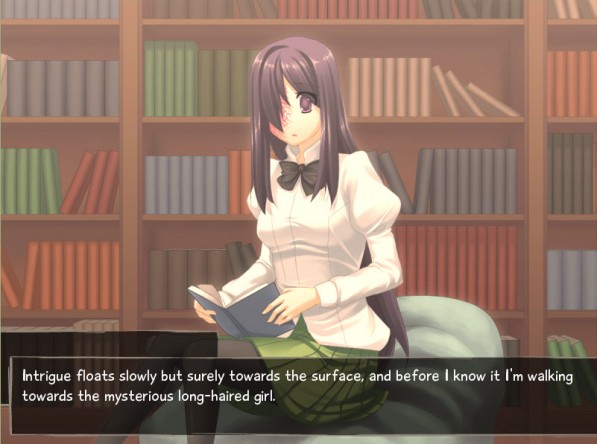 Sometimes it’s not actually clear how branches will progress the story. Basically, choosing different dialogue options changes the personality of your protagonist in subtle ways. If you don’t want to introduce yourself to the class when you first arrive, your character will be characterized as more shy in several future encounters. A decision made early in the game can have a ripple effect on other events down the line. This makes your choices feel very organic, and the story seems very logical as a result. On the downside, if you fail a scenario (which is possible; you can even die, if you play your cards wrong), it’s not always exactly clear which decision branch caused the failure. If you get a bad end, the text may hint where you probably went wrong.

Don’t expect you will make these decisions a lot. The branching points are not only subtle, but they are few and far-between. You might play for a half an hour before encountering one, and that’s if you are a fast reader. The game has options to skip and speed up text for future playthroughs, to make getting different branches easier. But if you aren’t interested in a mostly-passive story-reading exercise, don’t bother with this one at all. 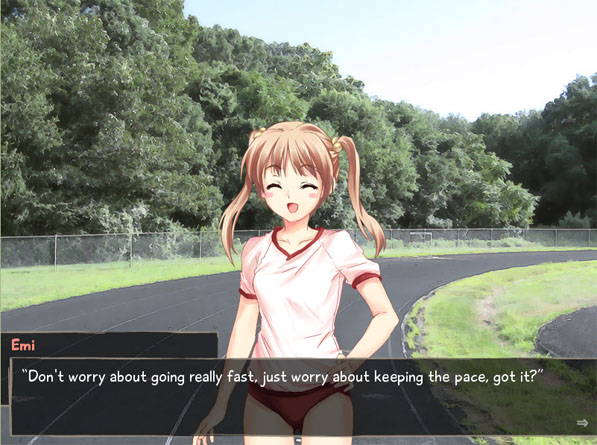 The game also has adult content. There is a filter to turn this off, but, I’ll confess I don’t know what it does, because I’m an adult. I suspect it keeps the kissing pictures in, but removes the most egregious sexual text and images from the game for a “safe for work” playthrough. The sex in the game would probably be more characterized as “erotica.” It’s softcore and very tasteful. I haven’t played traditional Japanese eroge, but I know them by reputation and have read lots of reviews. They can sometimes venture in to rather uncomfortable territory. Katawa Shoujo, on the other hand, goes a long way to make each of the romantic choices feel human, rather than just objects of fetishistic desires. As a result, sex that might seem deviant is instead romantic and sweet… and sometimes sort of realistically awkward.

I can’t really speak to how realistically the disabilities are portrayed from a first-hand perspective, because I’m not disabled. However, it does seem that great care was taken to make each portrayal true-to-life. The young women in the game are not defined by their physical flaws. They have personalities aside from this, and may even be resistant of the protagonist’s “help.” I think this is extremely refreshing. Since most video games are about people with super powers, disability is often used in games only as an excuse for bigger super powers. The characters in Katawa Shoujo are instead regular people living with disabilities in real-world ways. Falling in love with one of the young ladies isn’t falling in love with her disability, but falling in love with her as a person.

If anything, in true anime fashion, the weakest character is the protagonist. Of course, anyone would be a little listless in his position, but he also has poor observational skills at times. He doesn’t pick up on clues clearly in front of him. This might occasionally frustrate you until you get the opportunity to guide him. 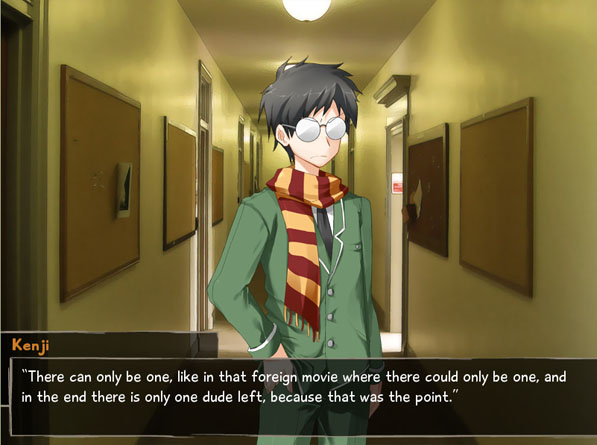 The writing overall is solid if slow paced. There are some strange bits with your comic-relief male dorm-mate that break up the romantic tension (and remind you there are male students at the school) and several side characters that will sometimes pop in to give you advice. Now and then the writing feels a little strained by the format: it’s clear the authors would like to reference American pop culture, but the Japanese-boarding-school setting doesn’t really allow for this. Some of the writing feels like something translated from Japanese, even though it was presumably penned in English from the start. In specific, at least one character keeps “-chan” suffixes intact. I would say it reads a little like the translation for Persona 4. 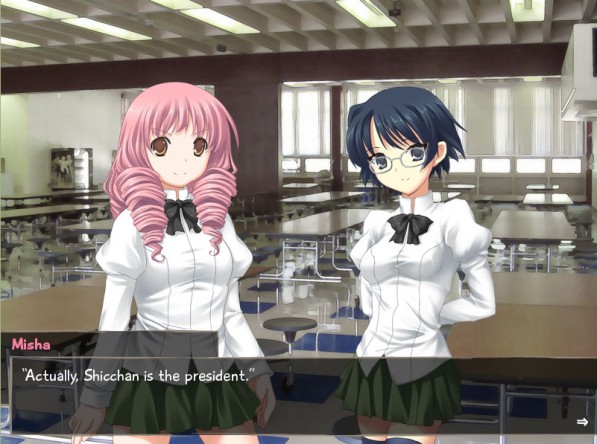 As you can see from the screenshots, the art is highly professional. What you can’t see from screenshots is that the music is, as well. The years of focused development and direction really show on this title. It’s actually long, as well (I’m at about fifty percent completion as I write this), depending on how fast you happen to read. However, it’s totally free to download.

You already know if you’re not the target audience for an anime romance novel about disabled schoolgirls. This depends most on your tolerance not for disability, but for romance: long walks in the rain, last-minute dashes to the airport, lunches on the rooftop. If that sounds as if it would bore you to tears, this isn’t for you. But if you want to try out this quirky, cute experience, don’t let the premise scare you off. It’s lovely and thought-provoking and I recommend it.