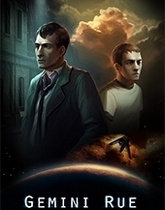 Available for PC
Time Played Completed (7-8 hours, give or take)

“Anyone who is familiar with the adventure games that were being made 15 or even 20 years ago will feel right at home here. Gemini Rue is a classic in every sense, one that is definitely set to appeal to enthusiasts of the genre, but also something that I would recommend to any computer gamer who simply loves the experience of getting lost in something familiar yet new.”

We’ve Done This Before

“She wasn’t supposed to die.” A man is strapped to a chair; he’s surrounded by a pair of scientists and their mysterious “director” in a menacing operating room. This is happening because something has gone terribly wrong. Some sort of escape attempt was made from this… facility, this… place. There’s already been one casualty. The man in the chair begins to regain consciousness; he seems destined for a fate worse than death: he’s about to be reborn with no knowledge of his own self.

“I still don’t see why we can’t just let him keep this memory,” quips one observer.

It’s too late. An apparatus is forced into the back of his skull; the man writhes in pain.

“Delta-Six, you’re in our hands now.”

Thus begins Gemini Rue. From the opening titles you may not put this game down until the credits have rolled. I was ensnared myself, having wrapped things up in all of two long sessions. This is not a game that artificially prolongs itself with overly difficult, bizarre or improbable puzzles. If there’s a computer terminal that is unresponsive, you might just be able to kick it. And if there’s a locked door, you might just be able to pick it. Gemini Rue is an adventure that puts story above all else, and while you might scratch your head here or there, for the most part you’ll use detective work and logic to hurtle forward.

Things are instantly familiar to anyone who has played a ‘point-and-click’ before. You left-click to walk places, and you right-click to interact with objects and people by using your eyes, hands, feet, and of course talking. “I can’t use my mouth with that,” is maybe the slightest bit of comic relief you’ll find here, that which is continuously repeated by protagonist Azriel Odin. In classic adventure gaming form you’ll do a lot of talking to yourself and the world around you; Gemini Rue plays it straight all the time, and never lets on that it will try to be anything else. It’s 2011 and it’s 1993. Joshua Nuernberger settles in comfortably to both the genre’s past and present, essentially erasing any line that lay between them.

After your initial glimpse into Delta-Six’s predicament you’re introduced to the second playable protagonist, Azriel Odin. The meeting you were supposed to have has fallen through, and Mr. Odin is unimpressed to say the least, as he’s been left, quite literally, standing in the rain. You’re on the Colony of Barracus, in the city of Pittsburg (all locale names seem loosely based on or lifted completely from random American cities). Barracus is a gas giant in the Gemini cluster, and on this planet it doesn’t seem to ever stop raining. That’s because the Gemini government are almost always culling valuable resources from the planet’s surface. This presumably has caused egregious devastation to its well being; as one habitant notes to you: “What are you doing outside in the rain? It’s a mining day.” 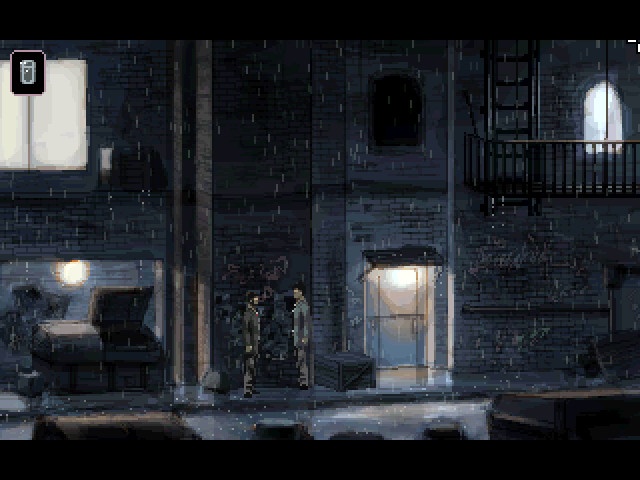 This rain, man. It

Just another sad detail in this place’s evidently cruddy streak. Nonetheless it’s what sets a perfect tone for much of the sleuthing you’ll have Azriel going on about. His side of the story often plays out like a procedural detective story, even if you get the feeling it’s likely to amount to more than the sum of its parts. Like I said before, the challenge isn’t so high, but the satisfaction is in how you simultaneously piece together Azriel’s motives as he pieces together his quest to locate his brother, and how that story unfolds in both obvious, rewarding ways and subtler or unexpected ones, too.

A short while into Azriel’s journey comes a break, and finally you assume control of Delta-Six’s often aloof narrative. He wakes up on a very unsatisfactory looking bed, in a small room, more like a cell actually: something out of dystopian fiction. “Wake up, Delta-Six.” Ah, I love the smell of being bossed around in the morning! Soon it’s off to… weapons training? It’s certainly an odd thing, not something you expect to be doing in what amounts to, in your eyes, a prison. But here you are. And over the intercom is “the director.” He’s displeased at the thought of having to re-train you once again, but Delta-Six obliges him, and it’s here that the player is introduced to what is possibly the one foreign mechanic to the classic adventure gamer: combat, with guns no less! It’s quite painless actually, almost a cute mockery exposing nude in front of your eyes just how funny and basic the cover system is in reality. You’ll use two keys to duck in and out of cover, you have one optional key to hold your breath (the reward being a headshot, or as Steve Carrell would say: “it’s a killshot!”), and the spacebar is the trigger. It’s simple, non-frustrating, and actually occurs during the course of the game no more than half a dozen times. And in keeping with adventure game logic, it’s really more timing based than reflex. 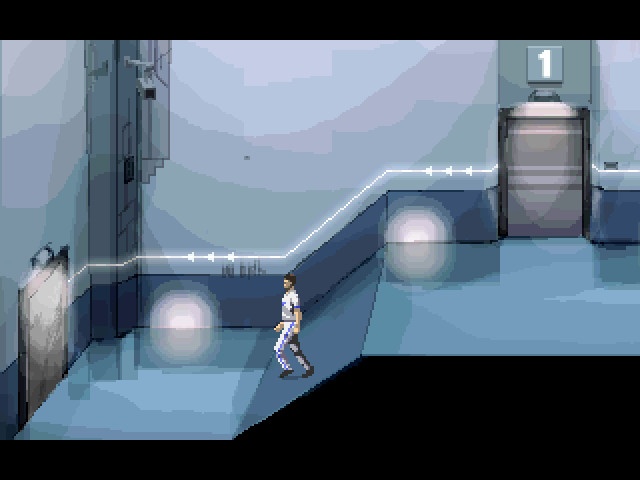 Oppressed living or not, I

Once you’re done with that it’s off to the mess hall to be rewarded for your agreeable behavior with a meal. This is the first time you’re introduced to one of the recurring motifs of Delta-Six’s– or Charlie, as we soon come to know him by, thanks to one of his non-memory-wiped acquaintances– story: a group of people, frustrated and angry at their lack of awareness and inability to trust strangers, as they all are to one another at some point, or even those they think they know. It’s a stark contrast to the gritty streets of Pittsburg: cell blocks lined with docile inmates; giant, steel-coloured, sterile hallways littered with security cameras and doors that won’t open. It adds in equal parts a feeling of mystery and hopelessness.

When both stories reach a certain point, fairly early on, you’re then free to switch between Azriel and Delta-Six as you see fit, until, once again, a certain point in the story is reached, where you’ll then assume control of one or the other as is relevant, and as morsels of information are rationed out to both you and the characters. I made a manual switch once, as I was probably just thinking I was clever and trying to be my own director. This feature is largely unnecessary but I guess is in place so you don’t have to feel at any point in time that one journey has taken precedence over the other. Again, I was sucked in deeply and just kept going.

It works out that most of the heavy lifting, and head scratching if there is to be any, occurs in the first two thirds of the game. As the stories become inevitably intertwined you’ll do a lot less busy work running around and a lot more straightforward problem solving. It may sound like cheapening of the genre’s core but honestly I found that it only enhanced my enjoyment; it’s not so much a linear path that you’re set upon, but a gripping narrative which unfolds in both a logical and satisfying manner. By a certain point it has nowhere to go but forward. Still, I hardly ever felt rushed to the point that I couldn’t sit back and take in some of the beautiful hand-drawn backdrops, even if it’s an obviously intentional retro style, which for whatever reasons might annoy some. 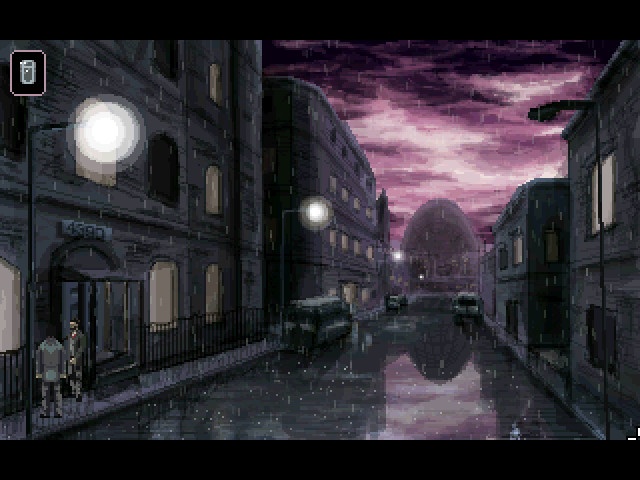 Pretty, ominous... all around it

Without going into any great detail of the story I will say that this is a game which, in the end, highly delivers on its early, hinted promise. It’s obvious from the get-go that you’re not just playing as two separate characters for no good reason, and that eventually somehow they will become relevant to one another. To say that Gemini Rue satisfies in how it unravels its mysteries is an understatement: as in most good games you can sense when the climax is about to hit, and here is a coda that’s as good as any I’ve ever seen. As someone who absolutely adored adventure games in their heyday and has ever since lamented their decline, for me Gemini Rue felt simultaneously like a trip back to the Golden Age and a breath of hope for the continued well-being of the genre. This, brought on by an intimately-sized group of artists who obviously care deeply for its future.

Website: Wadjet Eye Games [According to their website the physical version of the game, which was initially available for pre-orders only, will sell through February 27th (the day this has been posted!) and thereafter be discontinued.]