First, my humble thanks to everyone for the sympathetic Tap-Repeatedly response to my unexpected medical adventure(s). I continue to be warmed by your kind wishes and can happily report that I am healthy, active, and glad to be alive.

I can also report that I think I have finally solved the mystery of why I was bleeding in the first place. Sort of had to. None of the medical professionals I interacted with had any explanations to offer, so I became a detective on my own behalf. This is that story.

A Bit of Background

I am a muscular, if overweight, 61 year old male with controlled high blood pressure. My doctor has, for years, had me on fish oil, lisinopril (keeps my blood vessels from contracting), and low dose (81mg) aspirin. The only effect these pills have had on me is the desired one of lowering my blood pressure.

In October of 2011, I went into the hospital with a very mild chest pain and was prescribed, in addition to the drugs I was already taking, a drug which is supposed to further lower my blood pressure: metoprolol, a beta blocker that would slow my heart and expand my blood vessels.

Six days later, after taking my daily doses of low dose aspirin, fish oil, lisinopril and metoprolol, I was taken to the emergency room with a massive lower gastrointestinal bleed (LGIB). Massive, used in this sense, refers to the loss of more than two units — a unit is just less than a pint — of blood. In three days, in episodes that resembled diarrhea, I needed six units of blood to replace what I expelled — roughly half the blood in my body.

On the fourth day, no longer bleeding, I was discharged from the hospital and told to restart all drugs except low dose aspirin. I was to restart the aspirin in a week.

Three days after restarting my aspirin, I was back in the hospital with a second massive LGIB. This time I lost seven units. The decision was made to take me off aspirin permanently.

As I mentioned, not one of the professionals attending me during these two bloody episodes had any explanation for why I was bleeding. Tests were performed, procedures were done, questions were asked. The results were all negative. While many things were ruled out, nothing remained as a possible cause. If all the results had been reduced to a gesture, it would have been a shrug. As my multiple hospital stays slid silently into memory, I found myself less and less satisfied with the idea that massive bleeding, especially in an old man like me, just happens. That seemed like a lazy excuse for an explanation. Nor was I satisfied with the idea that I had suddenly become allergic to aspirin after taking it for years without incident. I wasn’t even satisfied with my own theory that the clot-busting heparin (an anticoagulant I was given during the diagnosis of my heart condition) had somehow made me hypersensitive to the anticoagulant effects of aspirin.

It wasn’t the aspirin.

Or, to be more precise, it wasn’t the aspirin alone. The bleeding only occurred after several days of taking two drugs together. Taking either one alone produced no side effects. The chart revealed that, prior to the first bleed, I had been taking both aspirin and metoprolol for six days. After the first bleed, I was told to restart all drugs, except aspirin, and then restart the aspirin after a week. Within three days of taking the metoprolol and aspirin together, I was bleeding again. My bleeds were the result of a drug interaction which produced a rare severe side effect. Following my last hospital stay, I was taken off both aspirin and, eventually, metoprolol. Whew.

Since one can’t call or email a doctor in the USA in 2012, I wrote an actual physical letter — with an envelope and a stamp and a return address and everything — to the internist who originally prescribed the metoprolol for me. My intent was to let him know what metoprolol and aspirin are capable of when they get together. To date, there has been no response.

Drugs.com naively puts it this way:

Call [HA!] your doctor at once if you have any of these serious side effects [while taking metoprolol]: easy bruising, unusual bleeding (nose, mouth, vagina, or rectum)…

The [HA!] part I added. Writerly license. Sue me.

The list goes on at some length, but the only thing that caught my eye was  the “unusual bleeding” part. Oddly enough, the package insert that came with my metoprolol prescription made no mention of bleeding, unusual or otherwise.

Drugs.com goes on to say:

In addition, beta-blockers (like metoprolol) may exert an antiplatelet effect, which may be additive with the effects of some salicylates (aspirin). 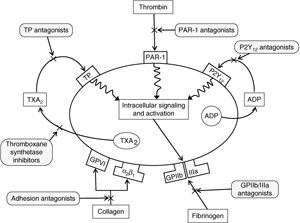 Antiplatelet is one of the three types of anticoagulant. Aspirin is an antiplatelet. I was, without knowing it, taking a double shot of pharmaceuticals which prevented my blood from clotting. While taking one or the other was no problem for me, taking them together was like chugging a battery acid Big Gulp.

I did manage to reach the physician’s assistant who saw me during my first bleed and the nurse of a surgeon who had been called in to advise during my second bleed. The physician’s assistant, an eager young fellow, heard me out, thought it sounded provocative, and set off to do his own research on metoprolol. The nurse was surprised at the suggestion that there might be a adverse drug interaction with low dose aspirin and metoprolol because it’s common to prescribe them together to heart patients. I pointed out that the rarity of the effect could lead physicians to assume, based on the largely uneventful experience of their patients, that it never happens. As a food safety expert once told me, “Rare is not the same as never.”

I also groused a bit about one of the attending physicians calling my bleeding “inexplicable,” which, the nurse agreed, is not something you want to hear from a doctor. Unless, of course, the doctor is being played by Richard Carlson and he’s reacting to something bizarre in a 1950’s Jack Arnold science fiction film. Then it’s fine.

And there is more from Drugs.com:

Metoprolol may also increase aspirin absorption and/or plasma (blood) concentrations of salicylates (aspirin); however, the clinical significance of this effect is unknown.

I’d suggest the clinical significance of increasing the absorption of an anticoagulant and/or concentrating an anticoagulant in the blood might include spontaneous bleeding, but I’m just guessing here.

So THAT’S what Happened!

As far as I’m concerned, the mystery is solved. My particular body chemistry reacted badly to two commonly prescribed drugs that are commonly prescribed together. Not surprising that the folks keeping me alive didn’t have time to wonder about what might have been responsible for bringing me to the ICU.

Rapid blood loss, no matter how often it happens, tends to crowd out contemplative curiosity.

The side effects also explained the progression of my bleeding episodes. Once in the hospital, the blood flow slowed and stopped because I was taken off all drugs upon admission. As the aspirin and metoprolol cleared (left) my system, their anticoagulant effects abated and I quit bleeding. Once I restarted my prescriptions, their anticoagulant effects returned and so did my bleeding. Simple.

For those with an interest in health care costs, some numbers:

Cost of drugs to get me into this mess: about $7 USD

Cost of hospitalization to get me though this mess: $65,000 USD

Thanks again, dear Tappers, for your concern and sympathy. Your emotional support has meant more than you will ever know.

Side by Side: The Unholy War