Hi Tap! I’m out at GDC 2014 this week, reporting from the expo and talking to the people who make the games. I hope to post some previews and news throughout the conference! This first writeup is just a trip report with some highlights from my first two/three days. 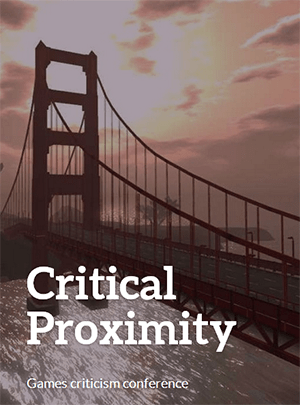 I say two to three days, because, technically, GDC started for me this Sunday. I attended Critical Proximity, a pre-show conference about the field of game criticism. The conference was full of interesting microtalks. I’m not going to write about them in much detail, though, for two reasons. One, because talking about the talking that happened about talking seems like it would give me a bit of a headache, and, two, because they are already available for free online and you should really check them out for yourself. I thought the talks near the end of the program, in the final block, were some of the most interesting ones, but was also really interested in Alex Cox’s talk about the divide between gamers and non-gamers, Gaines Hubbell on game writing and the academy, and Alan Williamson’s examination of magazines as dinosaurs. Go, watch videos!

The Monday and Tuesday of GDC are the summits and tutorial sessions. Just because of my interests, I found myself gravitating toward the talks in the game narrative summit most often. Game narrative has interested me as long as I’ve been a gamer, and I’ve met a lot of smart cool game writers over the years that I knew would have interesting things to say.

The first talk that I caught at the summit was about The Stanley Parable. In this talk Davey Wreden and William Pugh discussed the design of a game without any traditional game challenges. In The Stanley Parable, since choices were the primary game mechanic, it was important that the choices stand on their own and be fundamentally interesting.

After that I saw the talk by Deborah Henderson, with Microsoft research. Full disclosure: I’m a Microsoft employee now. But even objectively, I find player research in order to improve games completely fascinating, and I would have attended this talk anyway just to see how she does it. Henderson analyzed how interact with the stories of games, both Microsoft and non-Microsoft products. Using this analysis, the studio is trying to improve players’ recall of stories in games. They can discover what story beats players are not finding interesting, how to get players to pay better attention to important bits of stories, and when plot twists in stories are going to be predictable, with some basic but intense qualitative analysis. The hope is that analyzing stories earlier on in a development process will make game stories better and more interesting for players and increase their recall and enjoyment.

Sheri Graner Ray and Jennifer Hepler gave a very dense and fast-paced talk in the afternoon about engineering dialog trees in games. This talk had RPG leanings, and was largely about how to create a good quest-giver in an RPG or open-world style game so that players would remember the quest and act on it. The instructions here were very specific rather than broad. There was lots of useful actionable detail for a game writer, Maybe it’s not too important for me to go into that here, but I think I’ll be looking to pick these techniques out in the next few games I play. 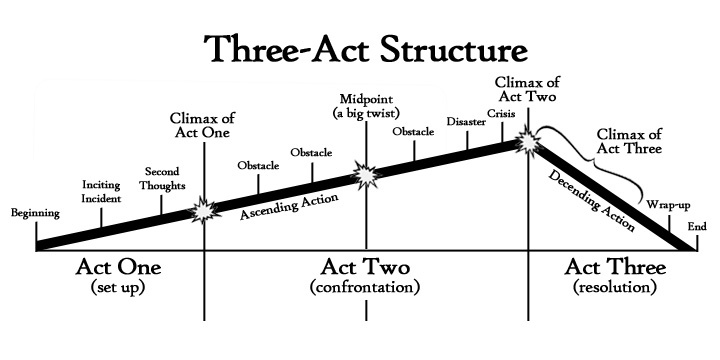 Tom Abernathy and Richard Rouse III discussed story structure in games and whether or not it was important. The talk was called “Death to the Three Act Structure,” and discussed said structure in some detail, including an example from the movie Toy Story and from the game Uncharted 2. Then it tore it all down, saying that there’s no one right structure for the stories of games and no easy way to break game story structure down. It examined some games that use different structures, such as The Last of Us which, with its season-based content and clear high and low points, is a lot more episodic, or, Fallout 3 and its open-world setup. But they were honest in saying they weren’t sure if there was any particular formula that would work in terms of making a great game plot.

Tuesday morning I took a break from narrative talks to get the news on the upcoming updates to the Unity game engine. This means I missed some talks I was pretty interested in, but hopefully I’ll be able to watch the recordings later.

The narrative summit on Tuesday afternoon contained an “Hour of Love” discussing game romances. There was a talk by Michelle Clough about sexy male characters and their relative absence from games compared to sexy female characters designed for the straight male gaze. Then there was a talk by Chris Dahlen talk about engineering different types of romances in games. Both talks were critical of current relationship models in games, to a point, though Clough says Bioware is the western company that’s closest to doing it right for straight women in games, and Dahlen gave a nod to Dragon Age as well. I’ve gone into more detail a few times about how romantic content is important for women (and that women who like men sometimes seem underserved), so I was pretty happy to see this addressed.

There was also a talk from Thomas Grip from Frictional Games on how to integrate game challenge with story. This was interesting partially because he made the assumption that challenge was a requirement for a game, making it almost a counterpoint to the Stanley Parable talk that dismissed challenge as necessary. For those who are worried about challenge integration (or just working on an AAA title where they don’t have much of a choice), he gave some actionable tips on how to add mystery and suspense to a game via the narrative side without creating much additional overhead for the design of the gameplay side.

The big takeaway from the Narrative Summit this year seems to be to write better characters and better character interactions. Most game writers and developers have come to the conclusion, either via research or direct experience, that “plot” in a game is over-rated. Very few gamers actually care about following it. When gamers say they are interested in a game’s story, what’s really interesting to them is what characters they’re interacting with, and/or what story beats were caused by their direct interactions with the game’s characters and its systems.

An overall takeaway that seems to be bubbling up from the conference as a whole (as well as Critical Proximity) is an increased call for more diversity in game development. Diversity is still a bit of a problem in this industry, but even talks not supposedly about that topic have given it some weight. Even the Animal Crossing panel today devoted some time to discussing the importance of having women on the development team and how their influence changed the design for the better. I don’t have statistics on who is attending now, but, at least anecdotally, there’s lines in the women’s restroom this year. I can’t remember that happening in previous GDCs. Maybe it’s a start?

I’ll be back later with some information about a few specific games at the show. According to Steerpike I’m a Correspondent now, and that’s a big responsibility!