Here is another cool thing I did at GDC: play a lot of the games in the IGF. Some of the games have been released already, while others are still works in-progress. The first game I played there fell in to the latter category: Gunpoint. Gunpoint is a work-in-progress being designed and programmed by Tom Francis, with help from indie artists and sound designers.  He keeps an extensive development blog, and I’d been following the project for a while, so I chatted with Tom at the event. Somehow from there I managed to get him to send me a test build to play with at home, for the full Gunpoint experience.

Gunpoint is a stealth-action-puzzle side-scrolling game. The player-character is a freelance spy, who is tasked to break in to buildings and get important code off of computers. He does this by using super-human leaping, gratuitous punching, defenestration, and a tool that allows him to re-wire the electrical systems of buildings to troll the heck out of security. For more explanation of the hook, here’s Tom trying to explain it to an asshole in his talk at GDC. I missed seeing the talk live, but it appears to be all there and in order.

When I actually started playing Gunpoint at GDC, I thought I pretty much knew how it would go because I’d been reading about it. But at first, I was pretty bad at it. There’s a certain category of Flash games that use a mouse-and-keyboard style control, and that’s what’s happening here. Typically, a game like this uses the keyboard to move, with the mouse to aim and shoot. Normally I’m not really a fan, because the two input methods are so different. It’s a little like trying to pat your head and rub your belly at the same time. But this type of input works really well for Gunpoint after some practice. The mouse is used to aim a jump, and adjust the angle of the jump in order to launch. Launching at a guard when his back is turned means a chance to get a few punches in, and knock him cold. Launching when his back is not turned, means, well… pain. 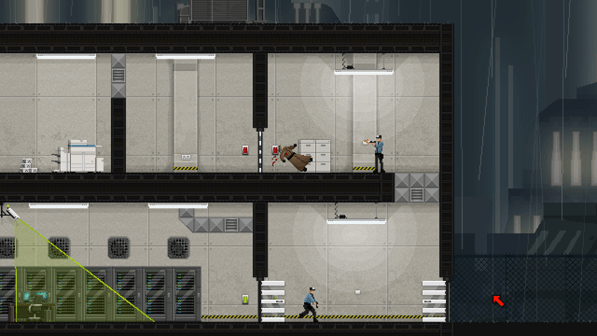 But that’s okay. Retries are unlimited, and saves are allowed mid-level. Generally, to succeed, it’s best to plan a route through the building out in advance, timing big jumps carefully, but there are always going to be surprises. There’s almost always more than one way to solve any particular puzzle and get out alive. Sometimes, especially near the end, my solutions felt pretty luck-based and hacky, but I think being able to potentially limp my way through was part of the charm. The game is relatively short so far, but there’s replay value inherent in trying to redo levels for a better or more elegant solution. Lots of missions also have secondary optional objectives, such as trying to traverse a whole level without alerting security cameras.

Sometimes alerting a camera may actually be helpful, though. The Crosslink mode allows the player to rewire certain elements of a building’s security; that’s the puzzle part of the game. Shown here, for example, are light switches on the walls. Right now, they’re wired, predictably, to lights, but if I wanted to I could remotely rewire so they opened doors instead. Or, I could rewire the security camera, so that when I pass under the camera, the door would automatically open. Other levels include motion detectors, alarm systems, different types of security guards to foil, and tricky timed vault doors that only stay open for a limited time. I learned to hate those. 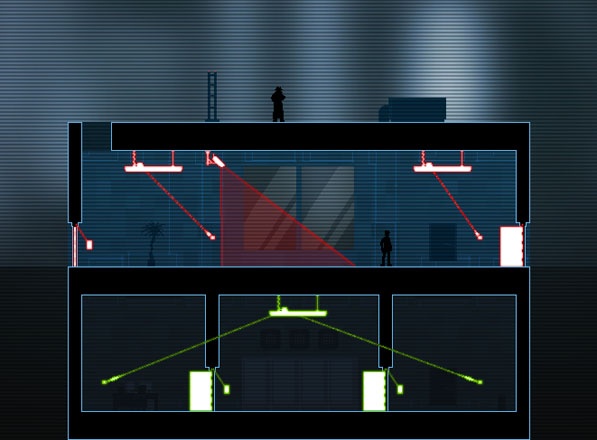 The character also has access to a gun, but it’s mostly used to threaten people, not to shoot them. It’s all paced fast, with no protracted run-and-hide sequences; either get away, or get shot.

Here’s something that surprised me a little about this title: it’s made in GameMaker. I became more acquainted with GameMaker at the Global Game Jam this year, so I recognized the little loading bar that pops up when I initially booted the game. GameMaker has some quirks, but I think it’s cool to see more games made in authoring tools like this. It’s a great thing for people who want to get involved in game creation but aren’t interested in writing a lot of raw code, and opens the floor up to more developers.

If you go here, you can see a list of all the features that Francis plans to add before releasing Gunpoint, on a date described as “later than July.” Or, you can just have him e-mail you when it’s done, if it’s the sort of thing you’d be interested in. I’m especially intrigued by the promise of additional story sequences to tie it together. Based on the fun I had with the demo I’m looking forward to grabbing the full build later this year!

4 Responses to A Preview of Gunpoint

Culture Clash: The Game of Life