After a rush on Black Friday, I am now the proud owner of a PlayStation 3 console. That allows me to pick up on some games that I have missed (more on that later). But it also allows me to watch Blu-ray movies, such as the Red Vs. Blue full series Blu-rays that I was itching to dig into, but unable to previously view.

Even though I got these at the start of the month, I’m actually a little glad I was able to watch them simultaneously with playing Halo 4. (And more on that, later, as well.) Halo 4 actually turns out to contain a surprising amount of Red Vs. Blue inspired throwbacks. And Red Vs. Blue slowly develops, over the course of the series, away from being a pure farce and more into being an actual wing of the Halo franchise. It’s an interesting symbiosis.

Let’s start at the top. The first season of the show, maybe the second, is what I (and others) really loved and remembered about the series. The short backstory is that a few talented people realized, if you did a certain motion in the game, the soldiers sorta looked like they were talking to each other. And thus was developed the Seinfeld of Halo: a show about guys in armor in a box canyon talking to one another, lamenting the pointlessness of their existence. The full series name and subtitle in that era is Red Vs. Blue: The Blood Gulch Chronicles. It’s a mad catch-phrase generator.

As I said when I watched the compilation, this is all from the perspective of a returning fan who hasn’t entirely kept up with the show, and didn’t realize just how big it had gotten. In that sense, watching the first two seasons of Red Vs. Blue next to later seasons is a little like watching early seasons of The Simpsons. The characters are there, and they’re how I remember them, but they hadn’t developed into what they eventually locked into. Just as an example, Private Caboose is essentially the Homer Simpson of the show. He starts out kind of dim, but that’s about it. He devolves over the course of the first few series until “the dumbest one” is his primary character trait, his voice drifting from relatively normal into a more distinct, stuffed-up sounding lisp.

In early seasons, there’s precious little action, so voice acting needs to entirely carry the show. In that sense, voices getting slightly more distinct over time is welcome, since it makes it a little easier to track who is who. I had forgotten how quickly people start dying on the show, and how quickly they start coming right back. For a show with a consistent cast, it’s never afraid to shake things up in the name of increased farce. It also jumps through multiple versions of the Halo engine. All of this means that consistent voice acting is important. Color alone can’t always let you know who is supposed to be who when characters’ armors change, or when characters jump from body to body as they are sometimes wont to do. 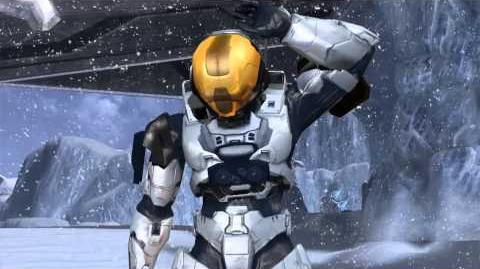 There’s even an RvB Wiki now! That’s where I borrowed this picture from.

There is a definite tonal shift of the show as it progresses. It starts out as pure sitcom, and gradually resembles a more action-focused space marine cartoon. This shift is mostly gradual, but there are a few jumps. Between seasons Five and Six, the part of the series called The Blood Gulch Chronicles actually ends, and the segment called The Recollection begins. Now there are entire sequences of dialog and plot exposition that don’t have gags or one-liners dropped in. I was already braced for this from watching the compilation DVD, but it does work a lot better in context than without. A few retcons are occasionally required to make this story all make sense in the long term, but it seems to come together pretty well as long as you’re on board with the idea of things getting darker. If you’re not on board with that, this’ll be about where it loses you.

The show takes another turn around Season Eight, where the action is ramped up to an astonishing degree. In previous seasons, there were fights, but they were staged by people… literally playing Halo at one another. But in 2010, Red Vs. Blue brought on combat animator Monty Oum. I recognized his distinctive style before I even read the credits: he’s known for doing game-inspired battle machinima such as the Dead Fantasy series. I could never entirely get behind Dead Fantasy; while the animation is really cool, a choreographed fight without any apparent purpose is not interesting to me by itself. But when there is a story and you know why people are fighting, it’s fun, elegant stuff to watch. Weightless, superhuman combat with weapons and vehicles start to dominate the RvB runtime from here out. Clearly inspired by The Matrix and other modern action cinema, this rivals just about anything in actual action movies.

I’m making a note of this next part just because it was unexpected and fascinating to me. The show often shows command characters without full face helmets, even in the earliest seasons. But in the later seasons, Spartan helmets also come off. This never happens for the main cast; like Master Chief, we need to just imagine what they look like or it might spoil the fun. But among various tertiary cast members we start to see Spartans out of helmets, and even out of armor. The out of helmet animations and lip sync at this point look pretty good. Out of armor, the full-body human models look weaker in design, and kind of rubbery, so it’s probably good that they tried but didn’t linger too much on it. With combat scenes, they still stick to armor. I have to say, it’s somehow ballsy to have a three-way combat among  all female characters and have them all in full power armor the entire time. 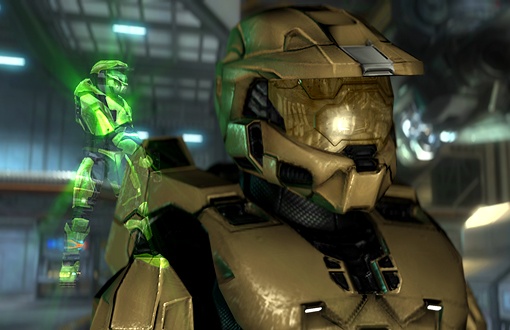 This will be the second-to-last article I write this year that’s mostly pictures of Spartans.

To be clear, in the second half of the series, Red Vs. Blue is still a funny show sometimes. It still has good comedic timing. But it is increasingly a show about action and story rather than just comedy. And, it increasingly becomes an actual show… about Halo. That’s where the parallels between Red Vs. Blue and Halo 4 itself become very interesting. The opening sequences of Halo 4 talk about things like the ethics of the Spartan super-soldier program. Spartans were originally created to fight humans, but the timing of an alien invasion with the program was somewhat fortuitous for justifying the existence of the program. In Red Vs. Blue, indeed, Spartans mostly fight humans (mostly each other). Halo 4 also discusses the problem of AI rampancy and the degrading of AI code over time. These are big plot points in entire seasons of Red Vs. Blue.

This all culminates in Season Ten, the season that completed this year. It has a lot of those fast-paced action sequences, and a surprisingly downer ending. I’ll say no more about that, but I’d like to pen a warning to any real-world AI developers. If you’re really dead set on naming a series of AIs or super robots after Greek letters, you should probably go ahead and skip “Sigma.” If Megaman X and now Red Vs. Blue are to be believed, this does not have a good track record at all. In Red Vs. Blue, this sinister AI is voiced by Elijah Wood, which just goes to show you there is at least one Hollywood actor that loves his internet TV.

Let me sum up by discussing the discs. It’s ironic in a way that watching a ten-year-old game machinima is my first contact with Blu-ray as a format. The increased fidelity of the picture that supposedly comes with Blu-ray is obviously lost here, considering a good deal of this footage was actually recorded on the original XBox (the majority from the 360). But one big advantage of Blu-ray is that it fits a lot of content on one disc. And that means bonus features. Commentary nodes can be activated for everything.

In total, there’s fourteen Blu-rays here. There’s ten that include one season of the show each. Each season is presented all in one chunk without interruptions.  Each is about the length of a feature film, though it varies from season to season. There’s also the occasional side-story miniseries, inserted on the discs whenever chronologically appropriate. There’s two full discs of the Grifball miniseries, also, though I personally find the core show to be a lot more entertaining. There’s a making-of behind the scenes DVD. There’s then one additional disc of additional bonus content. It includes ephemera like Rooster Teeth’s Comic Con video, Red Vs. Blue original trailers and bumpers, and even clips shown previously at Barenaked Ladies concerts or during the Spike TV Video Game Awards. Basically, if Red Vs. Blue showed up in something, anything, it’s on these discs.

And it’s a lot to take in at once. But a box set like this scratches my completionist, “must have everything” itch and makes me feel cozy. If you’re not a big spender or already own most of the series Season Ten is also an individual Blu-ray. Good possible Christmas presents for Halo fans who, alas, already bought Halo 4 but you were planning to get it for them for Christmas so your previous present idea was totally ruined. Again apologies to my husband on that one.