So Uncharted 3 releases next week.  I’ve been eagerly awaiting this game since…well, since about 18 hours after Uncharted 2 released.  And the early reviews are great.  But it seems like every time a lauded, high-profile release comes along with a linear story, we get into this crazy conversation about…well, about how inferior linear stories are.

For that matter, Arkham City kind of leads into this conversation, since its story is absolutely linear in the telling; the player can just take his sweet time in progressing it if he chooses to do so.  Increasingly, players expect to be able to direct not only the action in a game, but the course of its story, and understandably chafe at games that don’t give them this freedom.

Now, I don’t think we’re exactly in danger of linear stories disappearing from games entirely.  But it’s not the unfortunate evil that a lot of players (and, arguably, developers) make it out to be.  Sometimes, it’s not all about you.

…Except When It Is

Well…okay.  Video game design, and everything that goes into it, should be all about the player; the “you” who is playing the game.  Sometimes games stumble with that.  That’s not how other forms of entertainment are, necessarily; movies, music, and books can all be quite self-centered and succeed for it.  But not games.  Games are about giving the player an experience.  That needs to be built to maximize the player’s positive response.

And that’s where we get the idea of player choice in the first place.  A game, as my professor Jesse Schell defines it (quoting Sid Meier), is “a series of interesting choices.”  That’s any game, not just video games.  But video games, obviously, can offer certain interesting choices that it would be hard for other games to do.  That’s where we get this idea of making choices that shift the narrative around.  You are the hero.  This is your story.

And that’s, you know, awesome.  I love that there are games in which I feel like I’m an important part of a situation.  Some of my fondest memories, at least from the perspective of narrative experience, come from games that gave me a lot of latitude to direct my character’s actions.  But they don’t all have to be that.

…Because Sometimes It’s About Them

Occasionally we still get into this realm of discourse where we assume gamers are all pretty much the same.  Even those of us on the inside.  I think this is partly because, for a while there, gamers had the perception of being besieged by non-gamers: the video game violence debates and the allegations that games were making all of our kids fat and stupid and lazy and so on.  That kind of thing makes it easy for a group with a common interest to band together, in spirit, and assume an us versus them mentality.  We’re us.  Us is together.

Well, and then there’s the highly adversarial element that thinks that if you don’t like exactly what they like you must be an idiot.

But the fact is, as with anything, there’s a huge array of people that play video games, and it’s growing every day.  Contrary to what seems like popular belief, it would be tremendously unwise to cater only to a specific set of gamer.  Besides, none of us have time to play all the games that are made for us, much less the ones made for people that like the other stuff.  And believe it or not, there are those amongst us – say, me – who can still really get into a linear story well-told.

Why not just see a movie?  Well, for one, because movies don’t always offer the stories I want to hear.  Also, I like gameplay, too.  The fact that I like games with lots of cutscenes (if they are well done) does not mean I hate interactivity.  If I’m bothering with these games then the developers have done something right in their conception; they’re making it worth my while.

Oh, Yeah, And Also Those People 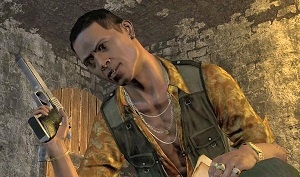 I would have stopped at nothing to rescue Eddie Raja.

Besides which, sometimes a story works best if the “author” (a term which may not always quite fit games, but you know what I mean) is in total control of it.  No matter how hard they try, BioWare just isn’t going to turn Hawke or Sheppard into legendary, iconic characters: no two are quite alike.  There’s something to be said for the Nathan Drakes of the game world, these characters who we can sympathize with because they’re, in their own way, like us, but not us.  The characters we can watch learn and grow, possibly in ways we’d have never considered had the choice been ours to make.  I doubt I’d have made some of the mistakes that Drake does, had Uncharted been a series that gave me control over his decisions, but those mistakes are important to his tragic arc.  Without them he’s just another gamer avatar in an action game.

There is a time and a place for both approaches.  In the end, they both have the same goal: first to entertain, and then maybe, in the better cases, to engage the player further – morally, intellectually, emotionally.  Games have a unique ability to do this by dropping players into the world of the game, and making them face actions and consequences of their own.  That much is true.  But good stories never go out of style.  Sometimes I want to make these world-shattering decisions as I go, but other times…

…other times I just want to go along with someone on the journey.

8 Responses to It’s Not All About You