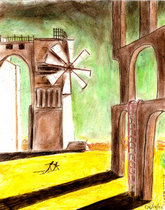 “My greatest fear of overturning one stone too many– disturbing the memories I had from my original experience– was something not to be realized. Within fifteen minutes I had accepted that I was once again in this beautiful space, and that it would not be for worse.”

The re-creation, redefinition, or re-release of a work of art or entertainment must answer one question: why? The way in which that question is answered may vary but the answers remain consistent: suddenly what was new in your work is now old and ugly. A film is re-released to DVD to capitalize on the gains in picture fidelity that consumers didn’t even know they wanted. Just as it will one day be scrubbed cleaner for its Blu-ray audition. This has become accepted practice for the video game industry also, with so much new real estate to capture in the move from 4:3 to 16:9 aspect.

The reason this happens is understood. But is the reaction? Our consumer reaction being, of course, new…improved?…must have… but why must we have it? Is there something one could get out of watching The Godfather, Part II on a Blu-ray that they couldn’t on video tape? No, I don’t think so, though I do think there exists room for many other answers. Maybe you forgot what happens and just want to see it again. Maybe you’ve convinced yourself that picture quality minutia really does matter. Maybe you just didn’t own a VCR, a cassette deck, a PS2. I can’t tell you the reasons you wanted to purchase that film you’d already seen, or that game you’d already played. I only can tell you mine.

When we approach this remade work what exactly should we address? How it’s changed, how it’s stayed the same, the new content or the old? I approached Ico & Shadow of the Colossus – The Collection with apprehension. After completing Ico last year I honestly didn’t know if I’d ever choose to return. What came from my experience of it was nearly unspeakable romanticism: quite literally; I wanted to write about my emotional experience immediately after it had ended, but simply was unable to form a meaningful expression of that experience for almost a week. When the words finally rained, they poured, and soon after crystallized into the spoken embodiment of my profoundly emotional deliverance. In a way it was all that I had left in reality. To physically return to something which in my mind had become this hazy memory of warmth and affirmation … it was a risk that could undermine those memories and grind away at their cocoon.

You’re reading this so it’s easy, and correct, to reach the conclusion that I indeed challenged myself to re-experience Ico. Of modifications there is very little to mention: it runs as well as it ever did on PS2 because it came early in that system’s life cycle and so proved not overly taxing. Most noticeable– to be honest perhaps the only difference I noted– is the picture filling the entire screen; the absence of a vertical letter box naturally pleases the eyes for sure. Quite thankfully– and unsurprisingly– absolutely nothing has been tampered with – no glass viewing windows inserted into the stone walls, no new grating action tracks laid down over the ambient minimalism, just the castle in the mist – as it was.

One thing worth noting for North American players is that the PS2 base version used for this collection is the original PAL release, not NTSC. I noticed something different early on when combat seemed to go on a bit longer than it had previously. A quick investigation told me that I was experiencing minor differences which were native to the original European release of the game. Minor indeed, but interesting that these differences exist at all. In the PAL and hence remastered version the shadow creatures will frequently thrust themselves to the ground, rendering them immune to your attacks, and they’ll also leap over you to avoid attacks; it makes combat segments slightly more challenging. Also different are two sections of the same puzzle area, one of which contains a somewhat awkward jumping puzzle requiring precise timing and reflex. Amusingly, in the original North American version this puzzle is mitigated by virtue of a ladder which allows you to bypass the whole awkward part; in the PAL version the ladder is broken. Subtleties like this ever so slight simplification for American audiences I find quite amusing; who in the design team thought these few changes needed to exist? Surely it’s a conscious decision that is reached … but how curious? Nonetheless they’re small and careful changes that, in retrospect, did not break Ico‘s vision (which is of course properly realized as the PAL version – and now the godawful NTSC “horned boy closeup” version can be truly forgotten!)

When You Put That Skylight In

My greatest fear of overturning one stone too many– disturbing the memories I had from my original experience– was something not to be realized. Within fifteen minutes I had accepted that I was once again in this beautiful space, and that it would not be for worse.

As I played, what I also accepted was that while my notions of what I experience may evolve, the content from which I was being stimulated would never change. There was a change, but it was in me: I had learned to rationalize what exactly it was I understood, what it was I loved about this place. My childish fears that some invented nostalgia would be lost … these were squashed. For once, here is a world that pervades my thoughts, and it’s not a yearning for the past, for safety, or for escape; it’s nothing that needs protection. It’s a genuine desire to project myself, however temporarily, into this vision that Ueda realized. A place that makes perfect creative sense, it is unadulterated; a joy to inhabit. Nothing exists without purpose. There is fear, but no confusion. Your goals are all, at some point, within your sight, and you can reach them with problem solving, trust, and devotion. Everything is clear.

To quote from an article on the collection in my local paper: “Beyond the basics needed to express their ideas, these are games whose power has little or nothing to do with their tech. Their operating system is the human mind/body/soul – they are true art and thus will never need to be excused.”

What I initially failed to understand was that this was not a game being remade because it begged to be accepted by its modern contemporaries, nor whose creators deemed a fresh coat of paint essential to prevent its stagnation. Ico has been remade because it will always be sought out. A painting can be gazed upon by generation after generation; if treated properly it will last forever. PlayStations will burn out and be tossed away; this very medium by which we experience the video game form is prone to decay more than any other. That is why it has been subjected to redevelopment, that is why I expect it won’t be the last time.

Ico is provocative, it is personal. It is ambiguous, yet subject to discussion. It is emotional without sentiment. It is grand and sweeping without blunder. It is a master of storytelling, though from it what story can be discerned? It is a triumph of the human spirit, but with it comes great sorrow: it is an indisputable work of art; one which demands to exist as long as there are human minds to ponder it.