You know the problem with perfect things? They’re perfect. And the moment something exceeds expectations, everyone expects more. Shadow of the Colossus was – and is – transcendent; “perfect,” even. Except for one thing. And though that one thing wasn’t enough to seriously tarnish the game, after that encounter it was super hard for me to be objective. I found it difficult to forgive or forget a flaw that would have gone unnoticed in any other game. Because Shadow of the Colossus was perfect, imperfections stand out.

The Eleventh Colossus isn’t actually hard to defeat: you wave a torch in its face and when it cowers you whale on it. Eventually you can knock it off a cliff and kill it down there. But he is so annoying, so frustrating, that I nearly abandoned the game then and there. In the end I consulted a walkthrough and beat him; like I said, it wasn’t hard. But that bitter taste stayed with me for the rest of my play, in a game that otherwise reveled in brilliance.

This is human nature, I think. The more we love, the more we see the flaws; the more unfair we are when we judge them; the more difficulty we have letting them go. The Eleventh Colossus ate up maybe 30 minutes of a 16-hour game. That’s like three percent. But even now, when long years have buffed away any other complaints I might have had, I remember less that it transported me and more that it couldn’t do it throughout – the Eleventh Colossus had broken the spell.

Tempest in a Teapot

Fair? Certainly not. It’s completely unreasonable to penalize a game that’s otherwise a diamond because of one miniscule issue. After all, I admit I’d never have noticed it in most other games, because most other games have a raft of small complaints. Even in the very good ones, there are sufficient rough edges that you’re able to overlook them. You’re not being desensitized to flaws in these games, you’re simply not super-sensitive. The flaws sit within a more realistic perspective. Did I heavily penalize Half-Life 2 for the Ravenholm mission? Or the excision of fiction regarding the Combine Wall? Or the bizarre story? Or the fact that the protagonist never speaks despite being engaged in myriad conversations? I did not. I mentioned them, or most of them; I said they made me unhappy. If the Eleventh Colossus had been in Half-Life 2 I would have mentioned it, but it wouldn’t have tainted the experience, because while Half-Life 2 is outstanding, it’s not… it’s not like being in the presence of the divine.

I bring this up because I finally finished Portal 2’s single player last night (review forthcoming), and I was surprised to find myself kind of angry at the game. I couldn’t quite explain why, only that for the last few days I’d felt something unpleasant when I booted it up and almost – almost, not quite – didn’t enjoy myself as I was playing. And that was disorienting to me because there’s essentially nothing to complain about in Portal 2.

In despair, I called Dobry for assistance. And we discussed. And he was able, as he so often is, to talk me down, to point out the irrationality of my feelings. And during our conversation I finally realized what it was that had thrown the switch in my mind: I had had an Eleventh Colossus moment in Portal 2, and that was affecting my whole outlook. 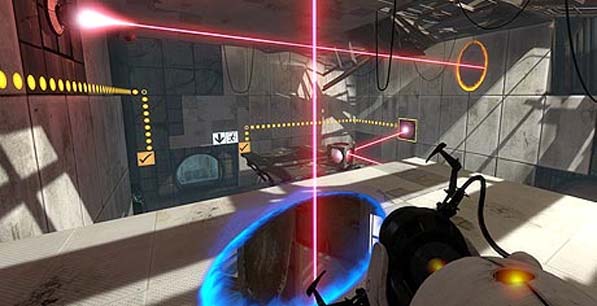 You see, in the Portal games (and I’ll go into this in greater detail in the review), you get stumped but never frustrated. The puzzles are so well made that precisely one second before your brain says “fuck it, I have no idea,” you see the solution. At worst your brain says, “I have to sleep on this.” In many instances I would solve Portal 2 puzzles in my head after waking up the following morning. But once or twice in Portal 2, I was baffled enough to get irritated. And that really threw me, because it never happened in Portal and Portal 2 is absolutely positively a worthy successor in every single way. So when I hit a tiny snag, my mind turned on it.

Now, here we are again, talking about two instances in 14 hours. And in fairness to Valve, the instances where I got stuck in Portal 2 weren’t exactly the same as the Eleventh Colossus. The feeling was the same, but the Eleventh Colossus is bad design – a foe that knocks you down continuously so you’re helpless to do anything. My roadblocks in Portal 2 were just puzzles I couldn’t figure out; the answers were there. But still, that one spark of frustration affected my whole outlook, to the point that I was beginning to resent the game.

After Dobry sorted out my Portal 2 dilemma he began to berate me (this is also something you can count on Dobry for).

Probing the issue a bit further revealed that I suck because I didn’t finish Homeworld, a sublime masterpiece of design and environmental mood.

Why didn’t I finish it? Eleventh Colossus moment.

About halfway through Homeworld, you arrive in a system where the enemy has set up an orbital research facility to study the aftereffects of a supernova. They’ve been harassing and terrorizing your fleet throughout the game, and this is a chance for a petty if satisfying instant of revenge: you try to wipe out my people, I’m gonna sneak up on your stupid space station and blow up your stupid science project. So there.

The entire system is awash in radioactivity from the supernova. It’s so bad out there that the ships in your fleet take continuous damage unless they stay in very narrow lanes of asteroids, where the space debris block enough of the radiation to make traversal possible. In and of itself that’s not a problem. It adds a layer of challenge to what might otherwise be a straightforward mission.

But the supernova remnant is so obnoxiously bright that it’s quite impossible to see the ships in your fleet most of the time. It’s difficult to be stealthy, and more difficult still to stay within the confines of  little asteroid passages, when you can’t see where you’re going. I tried and tried and finally… Eleventh Colossus.

I stayed with Portal 2 and Shadow of the Colossus despite those moments, but I abandoned Homeworld. Its moment was no worse than the others. And the game is brilliant.

To be honest, though, there were moments when I wanted to quit Portal 2 and Shadow, and it’s distinctly possible that I didn’t because I felt a responsibility – either to review them, or to complete these two very important examples of the art form, or because I didn’t want Dobry to be mad at me. As much as I had adored every moment of Homeworld, as much as that game was pretty damn close to perfection, I didn’t have any responsibilities associated with it.

To demonstrate how humans differ, I present the example of Thief, which Eleventh-Colossused a large number of players in a key mission called The Haunted Cathedral. 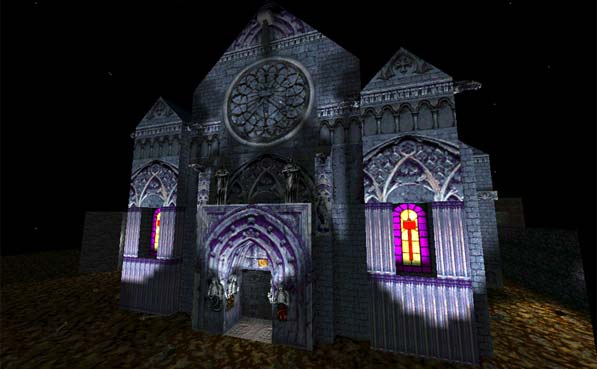 The Haunted Cathedral. Which you never actually enter during the mission that bears its name.

Like the brightness of Homeworld’s supernova, like the puzzle I couldn’t see, like the Colossus that knocks you over, it was a tiny thing that did most players in. The conceit of the mission is that despite its title, you don’t actually enter the haunted Hammer Cathedral during it. You’re supposed to, but it’s magically locked and you have to embark on several other missions before you’re able to get in. No, The Haunted Cathedral takes place almost entirely in the City streets, in a district that had suffered a terrible and inexplicable fate some years earlier. Out of the blue it got overrun by demons, ghosts, and other horrors; no one knew what their problem was or how to get rid of them. Not knowing what else to do, the City government simply walled off the entire neighborhood and declared it off limits. Since no one had time to grab their stuff before being evacuated, there’s a ton of treasure just lying around. And to beat The Haunted Cathedral, you have to gather a truly ludicrous amount of cash. Most of it is easy to find, but about 2% is quite well hidden. We’re talking hours of nook and cranny peering, at night, in a deadly and huge region.

It sucks to need $1,000 worth of loot, to have $998.50, and not be able to move on until you find a god damned charm bracelet or something. You have $998.50. Call it a day. It drove a lot of players away from Thief. As it happened I got lucky and found that last $1.50 on the crossbeam of an attic roof in a burned-out house after only maybe an hour of combing the area, so I didn’t get an Eleventh Colossusing in that game.

And like Dobry, who finished Homeworld and holds it in the esteem that it deserves, I berate people who quit Thief because of The Haunted Cathedral.

“It’s annoying, but it’s not that hard,” I say. “It’s like a couple hours. In the scheme of things it’s nothing. You suck.”

And so it goes.

The World is Not Enough

The failure lies not with games but human nature. One of our many great shortcomings as a species is our innate inability to be satisfied. Some are better at ignoring it than others. Some people can have only one drink and then stop. Some can find it in themselves to forgive a trespass from an individual or thing they’ve idolized. But many – most – can’t.

And the more satisfying something is, the more it fulfills you, the more of it you demand. The more of it you need. And the less able you are to absolve it when it doesn’t live up to your logarithmically growing expectations. A surfeit of joy is a terrible thing; the more we have the more we want. It becomes, eventually, impossible to satisfy.

The funny thing is, I’ll play good, mediocre, or even poor games for hours and not suffer the way an Eleventh Colossus moment makes me suffer. I played Final Fantasy XIII for 91 hours, 17 minutes, and 38 seconds. Despite playing through the original Portal at least ten times, I haven’t racked up near that many hours on it. And the original Portal is one of the, maybe the only, instances where the game is perfect all the way through without even a hint of an Eleventh Colossus moment. How can this be?

In part because Portal is short. Two hours and you’re done. Though I bemoaned its brevity at the time – not as a flaw but because I wanted more – Portal was smart to end before it had a chance to hurt me. Portal 2 is of course much longer, and though not an instant of that time is actually unpleasant, the simple fact of its length introduces the possibility that I or someone like me will find in it something that deflates its magic balloon. Meanwhile, Final Fantasy XIII was what it was. The many disappointments and frustrations it served up were par for the course, and while I eventually abandoned the game out of frustration, in some ways my memory of it is fonder than my memory of Portal 2 will be.

Perhaps, in the end, we all live in the shadow of that Eleventh Colossus.

47 Responses to The Eleventh Colossus

Why The Emerald Dream Can’t Be An Expansion