04/10/2011|Matt "Steerpike" Sakey|Editorials11
Home » Home » Editorials » Everything is Personal, Especially When it’s Not

Getting involved in teenage dramas? Check.

I am the worst teacher ever.

Welcome to don’t take it personally, babe, it just ain’t your story – the latest from acclaimed indie developer Christine Love, creator of Digital: A Love Story and another deep, complex, well-written and amazingly heartfelt examination of teen sexuality, the inexistence of privacy in our modern communications environment, and so much more.

I have to point out here that I love Rock, Paper, Shotgun, as I was turned on to this game (as I was to Digital: A Love Story) by RPS dude Alec Meer. I’ve played through don’t take it personally, babe, it just ain’t your story twice now, and I think there’s a lot to be found in it. As can be expected in a game of this nature created by a single individual there’s not as much branching as you’d see in your Dragon Age 2s, but you might find yourself enjoying this one more. The price of zero hundred thousand dollars certainly appeals more. 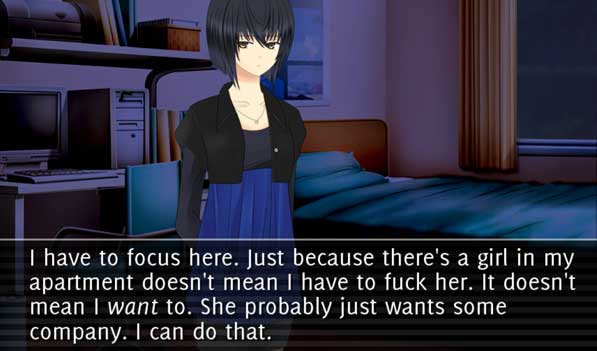 Prepare for moments of discomfort sufficient to make you shudder even when alone.

Told as a Visual Novel – a play format that has been hugely popular in Japan for years but never really caught on in the west – don’t take it personally, babe, it just ain’t your story does not put you in the role of John Rook, a 38 year old, twice-divorced crisis addict who reinvents his existence by getting a job teaching literature at a swanky private school in Ontario.

“It does not?” you say? Well no. It does not. If Alec will forgive me paraphrasing him here… don’t take it personally, babe, it just ain’t your story. You’re in it, as Rook, and you very occasionally make decisions for him, but most of the time you’re watching a tale unfold through the glass. In general, Rook is a pretty good guy. He cares about the wellbeing of his students, though he does fall far too easily for the wiles of Arianna, one of his junior-years who is convinced she’s in love with him in ways only a 16 year old can be convinced. And he does let the relationship go too far – way too far, far enough for prison, even as you the player have very little control in the matter. One of the points this game tries to make, and does well, is that today’s oversexualization of young people, particularly young women, puts individuals in authority in a terrible situation, while demanding that they do what is always obviously right. Rook is no pedophile, and Arianna doesn’t mean to lure him into destruction (she actually thinks she loves him), none of which makes any difference at all, really.

Sweet Valley High this is not.

But the affair between Rook and Arianna is hardly a blip in the complex theme of don’t take it personally, babe. The real message here, as it was in Love’s earlier Digital: A Love Story (though even more deftly handed in this game) is that our world is changing, that concepts of communication and privacy are fundamentally evolving. And some of us are going to get left behind.

Anthropologists think that there was a period in very early tribal prehistory when some Cro-Magnon children were born without sloping foreheads, looking in general a little more like we look now. To the more ape-centric they must have appeared deformed – or, as Larry Gonick suggests in his Cartoon History of the Universe, baby-faced, that too creating a crawly shiver of pedophilia. But the baby-faces possessed shocking mental powers. Over time, some historians speculate, they began to group together within tribes, possibly even inventing high-speed languages with their massive brains, and communicating at a pace their furrier ancestors couldn’t begin to follow.

Welcome to the world of social networking at a near-future high school. 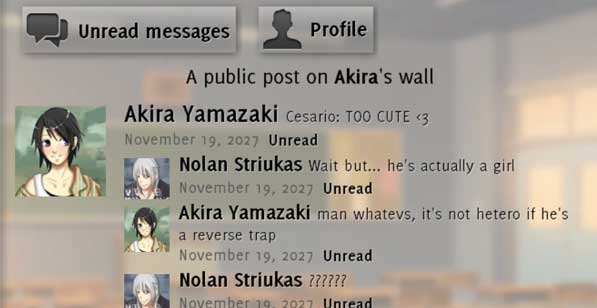 Students at Lake City Academy are happy to discuss Twelfth Night, but they do it in their own way.

It’s 2027, and all the students in Lake City Academy get their own computers. The teachers get them too. And everyone is connected via a FaceBook-style social network called AmieConnect. It’s got walls to write on, private messages, opportunities to share pictures, the usual stuff.

What the students don’t know is that all faculty have complete access to everything the students write and post, even the private messages. If they’re sexting, Rook reads them. If they’re shooting naked pictures to one another, Rook sees them. If they hated his lecture on Twelfth Night, Rook knows it. Somehow completely unshocking, Christine Love weaves this invasion of teen privacy into the story as something you actually have to do in order to proceed through the game. You’re told early on that it’s the school’s intention to monitor and prevent cyber-bullying, though we can all see the more prurient realities hidden in that supposedly banal and positive outlook.

But the message here is that kids today don’t see privacy the way we “adults” do. Sexting? Really? Do teenagers of 2011 not realize that the internet never forgets? Do recent college grads not comprehend that the first fucking thing I do after conducting a job interview is check out their FaceBook page?

Or, as don’t take it personally, babe suggests, do they simply not care any more?

don’t take it personally, babe, it just ain’t your story is a commentary on the future of social networking and the meaning of privacy. As Rook navigates the internal politics of teenagers, struggles with his own capabilities as a teacher, and deals with the usual student-body horrors of suicide, bullying, realization and acceptance of homosexuality, and all the other dramas that come part and parcel with the raging hormones and confusion of that age, he himself remains both an enigmatic outsider and a hopeless Old Person. At 38 he barely “gets” this way of communicating – it’s made clear that he “grew up in the era of FaceBook,” compared to AmieConnect FaceBook is postcards via pony express. Students never look away from their laptops. And even as he’s lecturing, bing, when he’s trying to make a point about Viola’s bing struggles or what Poe bing was trying to evoke bing with bing the Raven and bing why we should watcbinghing a bing movie version bing and why bing we can’t, or maybingbe shouldn’t do Romeo and bing Juliet because of the suibing bing bing bing.

And all the messages go to him, and by proxy you, and you just can’t keep yourself from bing reading them. Which in turn, of course, because Rook was clear early on in the term that he was available for his students no matter what troubles they had, leads to drama. And high school drama is the drama-iest drama.

You and me both, brother.

One thing that amazes me – one of the many, this is a great game you should try even if everything about it turns you off, it’s free and has artistic value – is that almost none of the game is funny. Even the parts that “could” be funny. It’s a tribute to Christine Love’s deftness as a writer. She is without fear; cold and brutal at times, and comfortable skewering those things she feels needs skewered. The worst I can say about her presentation of this game is that it could have been a fair bit longer, included a fair few additional characters, and required even more investiture from the player. As it is you have to keep track of a whole lot of things and put entire chunks of disparate story together without much help. Like a conversation among the Tap-Repeatedly community, understanding exactly what’s going on in don’t take it personally requires an almost metanatural skill to reassemble scattered shards of tale and conversation from a dozen or more atemporal sources. And even then, I guarantee you, the end will be a surprise. 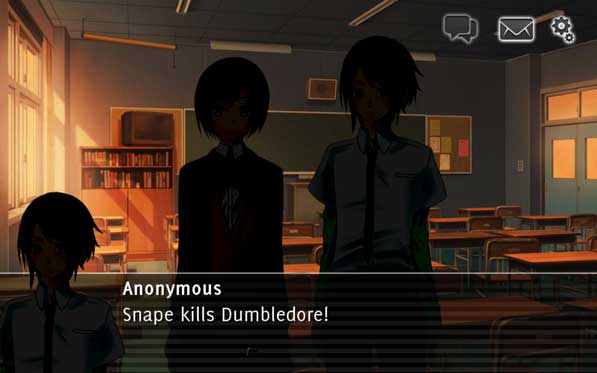 He does, you know.

A huge portion of the story relates to the two relationships between the four (probably) gay students in Rook’s class, and one of the things Love is able to take advantage of is the near-futurism of the game. One can hope that by 2027 teachers, parents, and other students will no longer be homophobic, that equality on that at least will have become a reality. Love’s narrative spends no time on it (again, deftly, by not making it an issue in her story it becomes a non-issue), and there’s no “should I be gay” this or “is it right to be gay” that. The ones who are are, the ones who aren’t aren’t. The ones who are unsure sort of experiment until they figure it out. Pretty simple really.

What I took away from don’t take it personally, babe, it just ain’t your story was a profound sense that Christine Love had captured the pointless melodrama of high school, when everything is all important and every snicker or failure means the end of the world, but all the successes are fleeting. In high school we love more energetically than we’ll ever love again; we certainly hate more energetically than we will again. The world is a huge, dramatic ball of chaos and excitement, and students build it further because it makes meaningless lives exciting. It is only after that time when reality breaks us down a little, when that meaninglessness becomes overwhelming, and suddenly no longer is every catastrophe or triumph boiled in melodrama the level of a silent film.

Look, if you must, at this very site. We don’t have secret lust trysts or anything (at least none I know of or have been invited to), but the reality of technology has changed our lives in ways that seem almost magical. Of all the people who contribute to Tap-Repeatedly, as writers, commenters, or forum-posters, I have met in person two. I’ve spoken with about a dozen. And yet beyond that some I have known for more than ten years and cherish them as much as I might cherish my closest friends. Does that make me weird or sappy? Nope. It makes me a consumer of this modern world of communication, where I can record podcasts with friends from the UK, check in on the careers of others living in the Balkans, shoot LinkedIn messages to those Down Under, and still stay a human who does stuff in the real world. Times, they are a-changing, my friends. 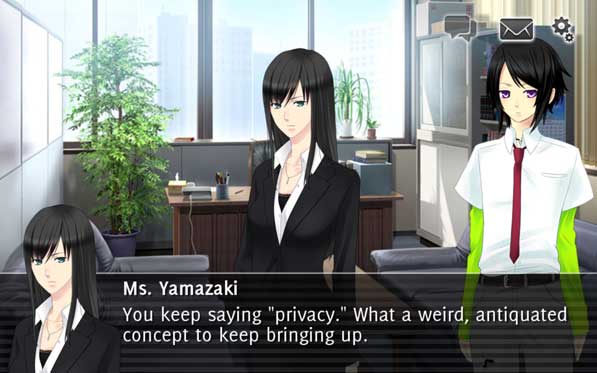 While don’t take it personally, babe, it just ain’t your story focuses its theme largely on how the very concept of privacy is evaporating, the larger message here is that we live in a world where separation is no longer an issue. From the drama of a high school to the drama of anything else, we are all connected. And don’t take it personally resonates with that message from beginning to end.

11 Responses to Everything is Personal, Especially When it’s Not