So because I don’t actually own an Xbox 360 (nor an Xbox, for that matter), I’ve always had to find other ways to play the (very few) exclusive games in their libraries that I cared about.  So it was that I find myself blitzing through Halo: Reach on my brother’s console during a recent trip home.  Because, seriously: Halo.

What began rolling around in my brain as a review of Reach quickly turned into something else.  Reflection.  A look back.  A requiem.

As long as you haven’t been living under a rock for the last decade, you know that the Halo series has received gobs of praise from critics and players alike.  Some would say more than it deserves.  Hell, I  would say that, and have.  Yet, when I look back on my experience with these games, and this universe, it’s a little unlike anything else I’ve played for, well, ages.  And I’m of the rare breed that hates online multiplayer and seldom cares for shooters in general.

So here we are, nearly ten years after Halo: Combat Evolved hit shelves for the first time.  And here I am, far from Halo‘s target audience, a vocal detractor, and I’m wringing my hands over the future of the series.  Here’s why.

Before you skip the rest of this as yet another instance of Halo fanboyism, let me be blunt: I do think, by and large, that the Halo series is overrated, at least as regards the things people really point out about them.  What made Halo: Combat Evolved as popular as it was, aside from being an early entry in its generation, was that it did a lot of old shooter things very capably.  It, and its sequels, demonstrate a greater proficiency than the majority of games in the genre across the board.

But few of Halo‘s features are truly outstanding.  The weapons are satisfying but not terribly interesting.  The vehicle controls are a bit floaty.  The level design can sometimes be bland and repetitive, especially in Halo 2.  The multiplayer works well but doesn’t offer up any real surprises.  (The exception to that last point, I should note, is Halo 3‘s Forge.)

I’m not accusing any of the Halo games of being bad.  Far from it.  They are remarkably adequate.  And when you consider how many games don’t even get that right, it still leaves Halo as a solid achievement of craftsmanship and design.  What the Halo games aren’t, generally, are the incredible landmarks of gaming that legions of fans make them out to be, and will often argue that they are to the bitter end.

Well, at least, they aren’t for the reasons most believe.

What always really got me about the Halo series, and still does, is the storytelling.  Now more than ever, I think.  On the surface I can see why: for the most part the games are paced pretty well, the characters are entertaining, if not deep, the situation is appropriately dramatic.  But the plot is also one hundred percent sci-fi cliches: the super soldier, the alien threat, the super weapon, the space zombies, the ancient advanced civilization.  I could honestly care less about the Flood and the Forerunners, which might be why I probably enjoyed the campaign of Halo: Reach the most.  The conflict against the Covenant has always been the most interesting part.

But lots of other games have the same pieces and I don’t care nearly as much.  The Resistance series, for instance, has an interesting arsenal of weapons, the mystery of the Chimera, and the whole alternate history thing going for it – but once I’ve played them, because they are very good, I move on and don’t worry about the series until the next installment.  I care even less about Gears of War, whose engaging combat and design gives me reason to play them for a weekend but not really spare them any more thought. 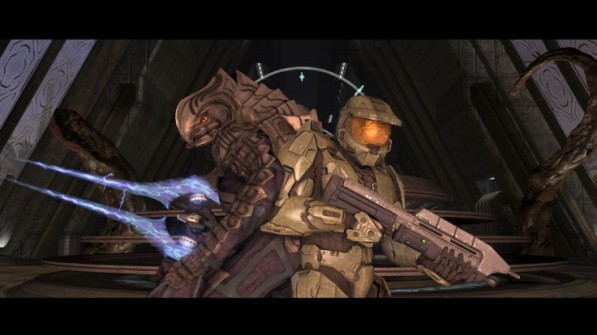 The thing of it is, the universe Bungie created is somehow vibrant and compelling.  I adore it.  I always want to know more about the Covenant and human civilization at the time.  I want to know what else is out there.

There’s certainly plenty of material for checking that out.  I’ve devoured a few Halo novels over the years, and the Halo comics that I’ve read have been cool, too.  Halo Legends, the DVD of animated shorts in the vein of The Animatrix, is lots of fun.  Lots of game series these days get novels, at least, to tie-in, but few interest me.  But Halo did.  And I’ve never been disappointed by that.

What Once Was Lost

I find the universe of Mass Effect very dull.

Let me qualify that statement a little.  My favorite hobby on this earth is tabletop roleplaying.  This involves, amongst other things, hours of reading big hardcover books about the setting of these games, and I love that.  So you’d think that BioWare’s encyclopedic additions to their universe would be right up my alley.  I’d think that too.  And to some degree you’d be right.

But they leave few unanswered questions.  And the problem that arises with that, and with the expansiveness of most RPGs, really, but especially Mass Effect, is that it can be very hard to make the universe feel like it wasn’t conceived for that particular adventure.  And the fact is, Mass Effect‘s does.  Over the course of the games Shepard & Co. engage themselves in so many random side quests that everything feels nice and tidy.  And the world isn’t like that.

The thing Halo gets right that Mass Effect does not is that Halo‘s world feels bigger than Master Chief, even before there were games without him in them.  Mass Effect has never, and may never, felt bigger than Shepard.  Sometimes less is a lot more. 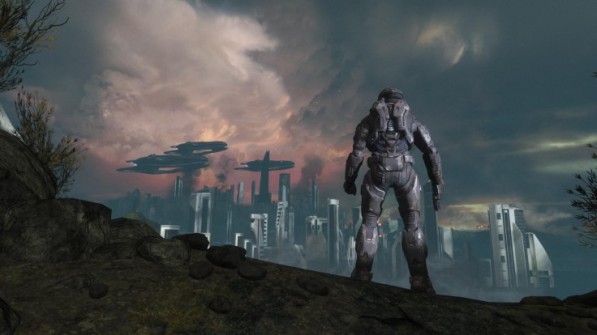 The fall of New Alexandria is a powerful section of Halo: Reach.

The thing is, the universe of a game like Mass Effect (or, to be fair, Dragon Age, or most JRPGs, or whatever else) feels milked for all it’s worth already.  But the Halo games focus on one corner of the universe – the war with the Covenant and, mostly, the part of that war that centers around the Halo weapons, which when you think about it is relatively minor in the larger conflict, probably.  But there’s loads of little hints to more depth.  I’ve always thought that the Halo games have magnificently interesting names for things: what has caused human civilization to name ships things like Pillar of Autumn?  Or Truth and Reconciliation?  And things like 343 Guilty Spark or 2401 Penitent Tangent – I mean, maybe someone at Bungie just started bashing words together, but I’m not sure I care.  Either way, that’s fertile ground.  And that’s just with the names.

Gun Pointed at the Head of the Universe

So to prevent more vaguely coherent rambling, I’ll just get to the point.  The Halo series has one of the best game universes of this generation.  Maybe the best.  And I wish I could rightly express why that is.  But good world-building is like that: you don’t really notice it until you look.  But I think that’s a big reason that the series has remained so popular, even though people rarely cite that as why.

It’s safe to say that the Halo series will be here for a long time.  Even with Bungie moving on to other projects, Microsoft Game Studios and 343 Industries will continue to build up this mythology, no doubt.  But because of this shift in who’s doing the creating (despite many 343 personnel being Bungie vets), I think I’m right in being worried that this game universe, so well-served up to now, might be squandered in successive sequels and such that just try to cash in on the popularity.  Nevermind whether they’re good games; I want them to be part of this world. 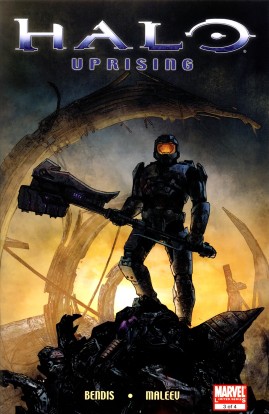 Part of what prompted me to write this little thing was a quote I ran across from comics scribe Brian Michael Bendis, perhaps best known for his work on Ultimate Spider-Man but really one of the best comic writers in action today.  He says:

“I think Halo is our generation’s Star Wars. It’s got a rich and untapped back story and world view that completely inspires me and millions of others. That’s why the game is such a hit, that’s why it raises past being a game into a cultural phenomenon, because it has richness to it that other games, and frankly, a lot of movies and television shows simply do not have.”

The first thing I thought was, “Seriously?  Star Wars?”  Then I thought, “Well…maybe.”  I think it isn’t there yet, to be sure.  Having not been around for the original release of Star Wars I can’t really compare the two in the moment.  But I think Halo does things that Star Wars also does, and that both do very well.  And Halo does smack distinctly of its time in history, right down to the eerily pertinent themes of religious warfare.  (It’s easy to forget, actually, that Halo‘s development predates the “war on terror.”)

I guess the key thing to latch unto in Bendis’s quote is “untapped.”  Halo gives the sense that there is so much left unsaid, undone, unexplored, that the urge to dive back in is inexorable for someone like me who likes to explore those frontiers.  Frankly, it doesn’t matter if Bungie designed it this way, or knows these answers, or didn’t even intend for the questions – sometimes that’s what the best world-building is.  And Halo is some of the best world-building there is. 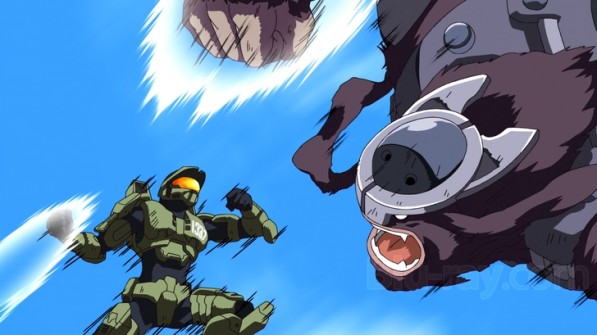 So I know 343 Industries is probably mostly concerned with delivering on the multiplayer expectations and so forth.  A lot of people want that Halo brand of action.  Hell, I do too.  But it is in 343’s hands to make or break this “cultural phenomenon”.  Because there’s lots of us unsung fans who want that, and that’s, I think, where gaming’s battle for proper recognition will be won or lost – not on the battlefields of Xbox Live, but of hearts and minds.

They’ve got a tough act to follow, but maybe, just maybe, Halo can continue to be a franchise that gaming can be glad to call its own.  Let’s hope they’re up to the challenge.  (PS: Call me.)

12 Responses to Rock Anthem for Saving the Franchise

The Scheme of Things