If you have been hanging around around the Steam catalog lately, you’ve probably seen this indie game from Zachtronics Industries. The Steam action catalog seems pretty thin right now and my son and I have been playing a handful of manual puzzle games recently. Sink or Swim, Rush Hour, Alcatraz, TipOver, and River Crossing have got me in the mood for puzzle games.

At a low level the  premise is that of designing and implementing the movements and operations within a chemical assembly factory to manufacture molecules from atoms. The factory consists of a couple of atom movers (called waldos) that can pick up either single atoms or the output from other factories and move them about the assembly space, allowing the player to create/break inter-atom chemical bonds in a set of special bond building spaces. Once the specified output molecule is constructed, it needs to be shuttled out of the factory either as the standalone solution to the level, or as input to a subsequent factory in one of the more complicated, multiple output levels.

I know what it sounds like: yuck chemistry, but thankfully, you don’t need to know anything about chemistry to play: the individual stage goals represent the chemical bonds pictorially and that devolves into thinking about simple movement and manipulation pretty quick. There is, honestly, an atomic periodic table available for reference but no description of how an atom’s position within the chart defines the number of bonds an atom can sustain, so it has proven unnecessary (so far) and that’s a good thing indicating the clear capture of a real world phenomena as an abstract game play mechanism.

In my second year of Engineering, the mandatory common path organic chemistry class stood as an obstacle of Everest-like proportion. An alcoholic instructor sacked mid-term led to the department head taking over, and each day he tut-tutted the previous instructors progress and vowed to, ‘pick up the pace a little,’ and slide after slide of incomprehensible chemical product would flash by at subliminal speed leaving me with a sick feeling in my gut. Probably an accumulation of ketones, maybe some alpha-placalids, beta-phenoboloids, and zeta- polyaphnards were causing my issues, but the keen little chemical and petroleum students absorbing each slide like little molecular sponges made the situation  worse. Then my major project partner quit Engineering entirely in the middle of our term paper and I was at sea.

I escaped (with major GPA damage) a repeat, but there are parts of my visual cortex that still don’t work properly and I still smell the smell of phenol when my left turn indicator blinks, and the experience honestly made me question buying this game. Why would I enjoy a chemical factory game if I have no tolerance for chemistry? The answer to that question is that the factory portion of the game is more a  programming language than a nano-molecular assembler. There’s a set of possible operations and an execution sequence for transforming the input to output criteria and that is pretty much the definition of a programming problem. You have freedom to approach the problem any way you like with the caveat that the physical space limitations and the command tool set often restrict you to the fairly optimal path. During the problem solving phase and particularly once  you get it working, the movement and precision of elements within the factories can be quite entrancing.

There is music but I haven’t found it noteworthy either positively or negatively. I have reduced the volume to a whisper as it is a little intrusive in hard thinking times. I have yet to check if a player can provide his/her own tracks as that would help with the limited selection. The entire in-game music selection  can be heard during the trailer at the Steam page

There is a story which consists of a multiple pages of text that are unlocked as various problems are solved. I’m early on and the story is in introductory stages. The teaser hints at surprises but so far the game has been all about the puzzles. 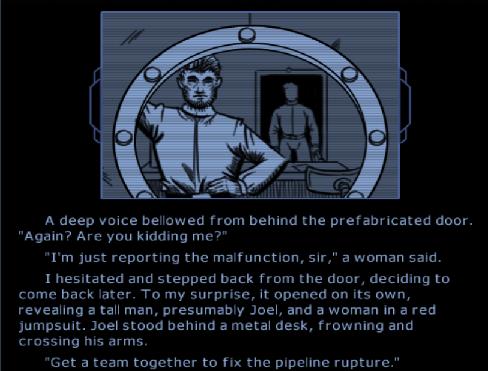 The factory editor where I have spent most of my time is well done. Placing the commands and routing atoms through the factories is pretty painless using either the mouse exclusively or using keyboard shortcuts to support the mouse. One small complaint is that occasionally you may find that you’ve not left yourself enough room to do a subset of operations and there doesn’t seem to be a way to shift a group of operations to a new location, but this is rare on the whole. There are a few tutorial levels, but I was hoping for more as I didn’t honestly feel prepared for some of the early challenges. On the one hand it’s a positive that the run time engine tells you clearly that you can’t rotate a molecule in such a way as to have atoms pivot outside the factory, but I wish I hadn’t had to discover that after I placed 20 widgets counting on being able to do that very thing.

I haven’t yet got my head around doing some of the more complex things with the primitive command set, either. I keep wishing for a loop control and a decision/branching control as I’m already finding accomplishing the goals at level three a bit tricky. This has been enjoyable though, and the game both allows you to revisit any level to try to improve your process efficiency and to compare your process design against that of others in both parts used and overall steps required to generate the required output. I would not normally do that until I had worked over my design, but the whole scheme comes right out of the box. In the case of the linked video of my process for problem 3-1, clearly the ‘comparison’ is against some savant petro-tech schooled chemical monkey’s theoretical design and not an elegant real world working solution but that didn’t diminish my enjoyment of the process and naturally I already have many many several major process improvements in mind for my next iteration. The YouTube video generation process is also included right in the game and that’s a nice touch. I’ve run across one tiny potential bug of not being able to switch the color of a single flavour of an already-placed instruction, but the game has worked very well otherwise. The PC version performed a .net update on install, but nothing else, apparently the OSX version requires MONO, and it’s available on Linux.

I’m enjoying it. Twelve hours already, yeesh. It has a minimalistic feel and feature set that isn’t unreasonable in a $10 game with some nice replay and online comparison perks that should make it a good value. I’d be content with just the puzzles, but I’m hoping the story provides something interesting as well.