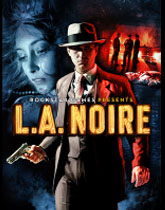 One of the best detective games to date…but not quite the stuff dreams are made of.

There’s a lot of things I can say about L.A. Noire, but since it might save some readers time, I’ll start with this: this game is not Grand Theft Auto with a badge, nor is it Red Dead Redemption thirty years later.  If you’re expecting the same kind of violent shooting action, you’ll be disappointed most of the time.  It’s all here, but it’s not what L.A. Noire usually gets up to.

This is a game made for people like me.  The sort of people who justify the number of police procedurals on network television.  The sort who really want you to be as intrigued as we are by the Zodiac killer.  The sort that don’t need a reason to hum the theme to Dragnet.  At its core, L.A. Noire is a police procedural game: find clues, question suspects, follow leads, repeat.  And mostly these sequences are not terribly sensational: more Dragnet than Castle or CSI.  The occasional foot chase or car chase or gunfight breaks out, but protagonist Cole Phelps is not Max Payne.

And actually, it’s the fact that this isn’t Grand Theft Auto that most often causes L.A. Noire to stumble – because it sure looks like Grand Theft Auto and sometimes plays like it too.  Consequently, some gameplay features seem curiously out of place, or even completely extraneous and, dare I say, pointless.

For what it is, the core formula works.  The cases are interesting enough, and often paced reasonably, and occasionally very well.  The clue-finding mechanics, which basically have Phelps wandering around a crime scene waiting for the controller to rumble, manages to be engaging; a clever use of the game’s score signals when all clues have been found.  Occasionally some clues have to be manipulated a little, taking the form of a small puzzle; one early case has Phelps reassembling the pipes on a heating unit.  These aren’t exactly mind-benders, but they vary up the gameplay from time to time. 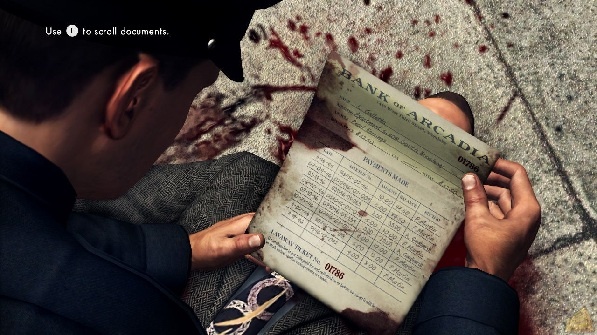 The real star of the investigative show, though, is the interview system.  On its surface it’s not that unlike the kind of conversation systems that have existed in adventure games and RPGs for the better part of twenty years: Phelps has a list of topics he can engage in any order, one by one.  But after the interviewee has given his or her response, Phelps has to choose to believe their statement entirely, to dig for something they aren’t saying outright, or to accuse them of lying (which requires that he select the clue, gathered earlier, that contradicts the statement.  Too bad he doesn’t shout “Take that!”).  Some part of this process is paying attention to the clues that Phelps has uncovered so far, some of it is watching the suspect – many will look visibly nervous when they are lying or withholding information, though some are better liars than others – and some is, honestly, sort of guessing.  It’s an interesting system and has its nuances, which can be frustrating, but it’s also really rewarding to read a suspect like a book.

The last new mechanic is intuition, a pool of points that Phelps can employ to reveal all the clues at a crime scene on the minimap (occasionally useful for when there’s some really well-hidden clue) or to help in interviews.  The latter is the interesting (and more useful) bit: Phelps can choose either to eliminate one of the three possible answers or to find out how all the other players logged into the Rockstar Social Club answered, by percentage.  (It would probably show my age to point out that these are basically two of the three lifelines from Who Wants to Be a Millionaire?, so I won’t.)  Intuition is earned as crime scenes, interviews, cases, and side objectives are completed.

Don’t get me wrong: there’s still a lot of room for improvement here.  But in the surprisingly sparse history of detective games, these mechanics are more engaging than any others I’ve encountered.

The Faces are Familiar

Perhaps L.A. Noire‘s single most notable achievement is its use of its extensive cast.  The cast not only provides the voices for their characters but frequently their likeness, and this makes L.A. Noire appear very diverse.  Anyone who watches much television should expect to see a familiar face or two, like Heroes‘s Greg Grunberg, amongst the “guest stars” that appear in each case.  There are games out there that have better character animation – Call of Duty: Black Ops or Uncharted 2: Among Thieves, for instance – but in terms of the sort of overall effect it has on the game, L.A. Noire really takes the cake. 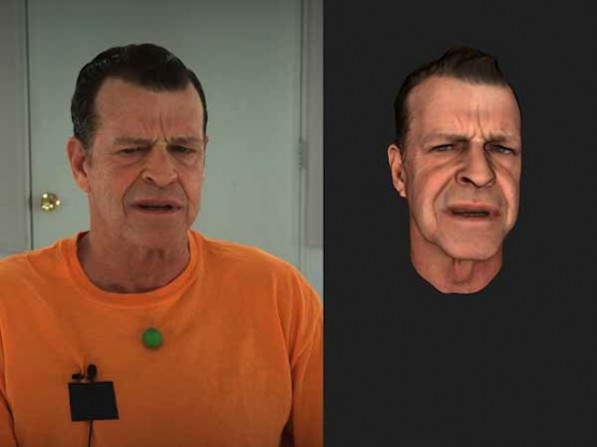 I know I've seen this guy somewhere before.  What was this guy in?  WHAT WAS HE IN?

If anything, this all only reinforces the television-like quality that already exists courtesy of the game’s many episodic cases.  Honestly, it almost makes me wonder why L.A. Noire wasn’t what it maybe should have been – an episodic game.  (Well, okay.  Episodic games, in general, haven’t been terribly successful, so that’s probably the pragmatic reason why.)

The point is, whatever else can be said of L.A. Noire, this is progress that Team Bondi can be proud of.

The City of Angels

However, not all is well in Los Angeles, but fortunately you can drive around in it to set things right.  Aside from the main cases – of which their are 21 in the game and 3 available for download, with 2 more promised in the next few months – there are street cases, small side quests that usually encompass a single action sequence: shooting it out with a group of bank robbers, pursuing a would-be mugger across rooftops, chasing a car thief through the streets.  These are fun, quick diversions, especially during times when the main case isn’t serving up the action as much as you might like.  They also garner experience towards intuition points and other benefits.

But besides these things, the open world nature of L.A. Noire seems completely extraneous.  Because the main cases are completely linear and there are no other side quests to speak of, driving from place to place is merely a formality.  Yes, occasionally Phelps will chat over the case with his current partner, but beyond that there’s really no point to the driving time.  Side tasks that come with this travel, like finding various Los Angeles landmarks and locating 50 hidden golden film canisters, are poorly implemented and not remotely incentivized unless you’re a slave to the trophy system.  It doesn’t help that there’s no apparent in-game clues to these tasks, which, in a world as large as the reproduction of 1947 Los Angeles is, makes them exercises in tedium.

Phelps can drive other cars, and there are 95 to choose from, but let’s face it: this is the 1940s.  There are not 95 interesting cars in the 1940s.  Indeed, many of the entries on the list are simply the two- and four-door versions of the same car.  Again, since there’s no real point to the driving, there’s little incentive to find vehicles that handle differently – especially since car chases will almost always drop you back in your police car, which will usually be a better choice in any case.

The good news is that Phelps can have his partner drive to locations, thus skipping all the travel time (unless they have a conversation, in which case they’ll have it while you watch).  This makes most of these shortcomings excusable.  Players who drive everywhere will probably be left with the distinct impression that this game is trying to be something that it’s not, and trying only half-heartedly besides.

Which brings me to the real issue with L.A. Noire: the narrative.  It’s kind of a shambles, really, and as near as I can tell this is also because of some sort of identity crisis.  Parts of the game feel like the narrative direction was toward an effective, episodic crime story, revealing each case that Phelps cracks.  Other parts are decidedly directed towards a limp, overdone game narrative linking many cases.  I think both of these things could coexist, if done right; but in L.A. Noire, they were not.

Some cases stand on their own.  They start and end within a few hours, tied up nicely (or not so nicely, depending on how well Phelps did with putting clues together and running down suspects) and then filed away, never to be seen again.  These cases are the best in the game, almost categorically.  They also happen to include the (well worth it) DLC cases. 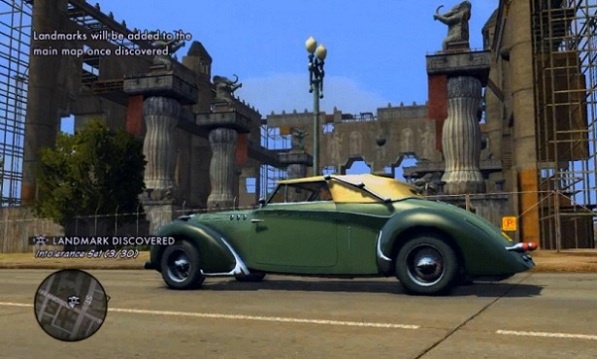 Los Angeles 1947 is big, pretty, painstakingly reconstructed, and you can drive around in it.  I'm just not really sure why.

Some cases, especially those late in the game, feel compelled to fit into a larger narrative, and there’s a few problems with this.  First and foremost is that these larger narratives (it happens more than once!) are unsatisfying.  The first is cheap, frankly, and it seems like the writers realized this and, instead of fixing it, decided to keep it and just try again later in the game.  The second is larger, ties together more of the game, and would have been okay if it didn’t dominate a full quarter of the game.  The result is one of those instances that plague many mystery games, when the player will inevitably know whodunit hours before the characters but be helpless to do anything about it.  This is not helped by the plot revelations that come as easily as the game’s first crime scene through newspapers that Phelps can locate, prompting a cutscene to play that doesn’t seem to have anything to do with anything – at least until late in the game.

Phelps himself hardly helps.  He’s one of those game protagonists that will be forgotten long before L.A. Noire itself is.  He’s not irritating; he’s just not interesting.  Much of his story is told in flashbacks to his time as a Marine at Okinawa, and this eventually has interesting revelations, but it’s too little, too late.  The rest of the game’s cast are fairly colorful, including Phelps’ partners, but to paraphrase one of them, he changes partners too fast to learn their names.  The game would have been better served to have some consistent character besides Phelps, but as it is the second most consistent guy in the game is the coroner.  The dialogue is solid and the interactions between Phelps and his partner-of-the-week entertaining enough, and the plot of the cases usually will keep things engaged.  There’s just no character to give this game it’s anchor: try as they might to make us care about Cole Phelps, he’s just not John Marston.  Not by a long shot.

L.A. Noire is very much like the game I’ve been waiting for for years.  It’s remarkable to me how few detective games exist at all, much less how few of them work well.  And I really really want to love L.A. Noire as much as I would love that hypothetical game.  There’s just one too many missteps.

But let me not be misunderstood: L.A. Noire is a technically proficient, and sometimes impressive, game.  It’s also a bit different without being shockingly different, and in the end it does scratch that detective itch.  There’s a lot of good here, and a lot of promise for more DLC and/or a potential sequel, if the developers learn a little from this first attempt.

If you are looking for Grand Theft Auto, steer clear.  But if you’ve always wanted to star in a police procedural, there’s no game I can recommend more than L.A. Noire.  You just have to keep your expectations in check.  It’s not everything it could be, but what it is is fresh, surprising, and kinda neat.