Darkfall is enjoying its first birthday this year.  Born on the 26th February 2009, and developed by Aventurine SA, the game was plagued upon its release by a catalogue of problems that stretched as far as Agon’s land mass.

One year later, has the game really managed to overcome its shortcomings, and will it ever prove Ed Zitron and his infamous review wrong?

Visiting the Darkfall website, which has notably had a visual face lift in the last twelve months, I acquire a one week trial of the game for 1€.  Sixteen hours later and after a pain free installation process, I’m creating my heroine and struggling to think of a surname.  I settle for a Mirdain (that’s a forest Elf to you and I) with pink hair, a heavy-weight nose-piercing and a headband to rival Sienna Miller.

Surprised at the level of polish the game is already demonstrating, I wander around my starting location to get my bearings.  The scale impresses; towers spiraling skyward, trees the size of giants and castle walls that dominate the skyline, all looking far more appealing by the summer sun overheard and generous lighting.  At 12 o’clock in the afternoon on a Friday, I had no expectations of towns bursting with activity, but pleasantly surprised, there were more people than expected, with a hubbub of activity towards the market area.

Introducing myself over local chat and grateful for a usable, well presented interface, I ask my customary questions that have evolved over ten years of online play. 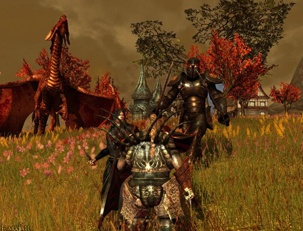 Further surprising, I find polite welcome messages and responses that are actually helpful.  For a community that has been lambasted in the press and within rival MMOGs, it’s a welcome relief to dust away some of my preconceptions.   Collecting the first of my obligatory quests (regrettably still very much standard MMOG fare) I head out of the main gates in search of pesky goblins, wearing only rags and wielding a short sword.

It may surprise some that the game is played between the first and third person perspective; the camera panning to third person when your weapon is drawn, and reverting back to first when sheathed. Attacks can be made in horizontal or vertical swings for as long as your stamina will allow, and you can swing freely with no cool-down timers.  As there is no targeting, damaging single or multiple opponents is entirely reliant on your own accuracy and strafing ability, and feels very akin to a first person shooter.  You could stand stationary in front of an opponent and chop away, however enemy AI is smart.

Unlike traditional attempts at the genre, where a player can often move within meters of an enemy without fear of reprisal, Darkfall breaks the mould and gives enemies a true line of sight.  Trudging out of town and towards the Goblin camp, it quickly became apparent that arrows were in fact flying at me and not from enemy players.

My first attempts at collecting pick axes from the gobbo’s ended in disaster.  Running in adrenaline pumped, expecting to mop up the first enemy encounters like every MMOG before it, was ill conceived. Being quickly dispatched by a Shaman who hit like a truck on my poorly armored body was embarrassing as fellow adventurers looked on. Three attempts later and I began to pick my fights wisely, working my way around the outskirts of the camp, finally felling some of the critters before hurriedly looting their tombstones and making a swift retreat.

The lack of a “take all” facility when corpse looting makes for a laborious task when dragging multiple items to your backpack and also leaves you incredibly vulnerable, however it is refreshing to see an enemy’s inventory reflect what they were carrying, wielding or wearing.   After only one or two goblins I had managed to acquire a shield, a better sword and some rudimentary armour, and was looking far less like a prostitute with an agenda and more like an on screen extra from Xena Warrior Princess.  And then Isaac Thorne appeared.

My chat box blinking with a private message, Isaac Thorne kindly introduced himself and offered to lend his services (no doubt due to my vocal requests for help completing certain quests).  Ten minutes later and after much discussion, he appeared on mount like a big brother ready to protect his sister.  Giving me a guided tour of the city, he introduced me to the bank, and the necessity of securing your items (Darkfall has a full loot rule-set, meaning if you are killed you drop all your inventory with your corpse unless resurrected).  He kindly gave me an abundance of armour and weapons, the strength of which had me cutting through goblins like a scythe to corn.

We sat at the bank under the giant oak trees for some time, chatting about Darkfall and its evolution, as well as its core mechanics in comparison to recent titles such as Mortal Online, titles all vying for a slice of its hard-core audience.  I was disappointed to hear that player housing wasn’t built, but was pre-established, with only deeds traded to acquire such property.  I was also saddened that despite Darkfall boasting the largest land mass of any MMOG, there is little to no reward for exploring the wilderness; the instant availability of all location maps undermining a potential trade-skill.  What’s more the lack of animal taming and a limited array of weapons is an opportunity missed.

In its defense, Darkfall has a great deal to offer.  The trade skills are enjoyable and far surpass Mortal Online’s, although the principals are very much the same.  I had 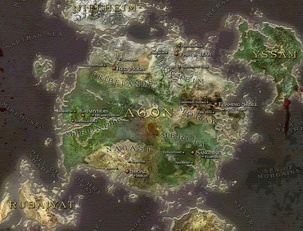 a great time gathering resources in order to start my bow craft, romping through the wilderness seeking out iron ore and wood before whittling away.  It is all very time consuming, but automated harvesting animations make the process much less painful.  The prospect of losing all your items upon death all the encouragement you need to prepare yourself for the inevitable.

The graphics and the world itself look great, and there is a level of polish and stability akin to any of the mainstream MMOGs.  Player models and animations aren’t the best they could be, but these are minor niggles after being spoiled by Aion’s polished splendor.  A full loot rule-set may appear daunting, but the abundance of player crafted items and the support of guilds alleviates some of the worry when nothing is irreplaceable.    The combat in comparison to many other MMOGs is also weighty and fast paced, and has a brutal feel much like Age of Conan.  You feel entirely in control of your own actions, with mistakes your own.

Although in the literal sense there are no levels and no item restrictions, it is highly probable that unless significant time is invested into leveling up specific skills through your actions, you are likely to get killed by other players very quickly.  A grace period to protect new players, highlighted by a halo around your head for 24 hours is a welcome relief, and prevents you attacking or being attacked by other players.

Aventurine SA have made great strides in a year to iron out the bugs, stabilize the game and improve on the core mechanics. Halving the price of the game now from €44.99, would also go a long way in attracting more players to Agon’s pastures, considering Warhammer Online has recently announced their client is now free to download.

After exhausting my week long trial, the open nature of Darkfall is a great change of pace to the perpetual level grind of World of Warcraft clones, while its full loot rule-set takes me back to EVE Online.  If Aventurine SA continue to build on what they already have, I suspect that Darkfall might just be something truly special.  I think I’ll stick around for a while and would recommend others to do the same.